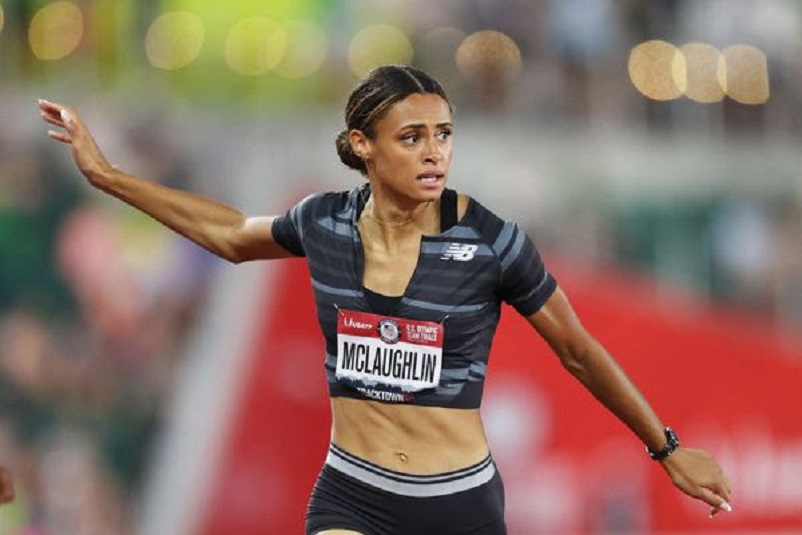 Anyone watching the closing stages of the women’s 400m hurdles final at the US Olympic Trials would have had a serious case of déjà vu.

The top two protagonists – indeed, the two fastest women in history for the event – came off the final bend level with one another, just as they had done at the World Athletics Championships Doha 2019.

On that occasion in the Qatari capital, not much separated Dalilah Muhammad and Sydney McLaughlin as they negotiated the final barriers before Muhammad went on to win in a world record of 52.16, just 0.07 ahead of McLaughlin.

Fast forward two years to Eugene’s Hayward Field and the two women found themselves in pretty much the same situation at the US Olympic Trials. Shamier Little was actually level with the pair up until the eighth hurdle, at which point she lost enough balance to take her out of contention for the victory. Muhammad had the slight advantage at that point, but McLaughlin moved up a gear at the ninth hurdle and inched ahead.

And that’s where the déjà vu ended, because McLaughlin charged towards the finish line to stop the clock at 51.90, smashing Muhammad’s world record* by more than a quarter of a second with the first sub-52-second run in history.

“Oh my gosh!” was the 21-year-old’s immediate reaction as she crossed the line. “It’s one of those moments that you dream about and think about when you’re going to be able to put it together. I knew, from the moment I woke up today, it was going to be a great day. Afterwards there was a real ‘I did it’ moment and I’m going to cherish this for the rest of my life.

“Dalilah is a great competitor,” added McLaughlin. “There’s no animosity or hard feelings. It’s just two people trying to be their best. Iron sharpens iron; we wouldn’t be able to have these world records go back and forth without one another.”

Sydney McLaughlin is no stranger to breaking records.

Since her early years in the sport, she has been making her mark on the sprints and hurdles. But then, track and field has always been in McLaughlin’s genes.

McLaughlin was born in New Jersey in August 1999 as the third of four children. Her father, Willie, reached the 400m semifinals at the 1984 US Olympic Trials, while her mother, Mary, was a runner in high school.

All of McLaughlin’s siblings – older sister Morgan, older brother Taylor and younger brother Ryan – showed promise in athletics, but Sydney has been the most successful of the quartet.

She first came to prominence in 2014 at the age of 14 when she started setting world age bests. That year, she reduced the world age-14 bests to 13.34 in the 100m hurdles and 55.63 in the 400m hurdles, both over the senior height barriers. The latter performance came at the US U20 Championships, where she finished second – a qualifying position for the World U20 Championships in Eugene that year. But at age 14, McLaughlin was too young to compete there.

In 2015, McLaughlin was old enough to make her global championships debut. Despite being the second youngest in the field, she won the 400m hurdles at the World U18 Championships in Cali, finishing almost a second ahead of her nearest opponent.

As Olympic year rolled around in 2016, McLaughlin’s progress continued and she set a world U18 best of 54.46 to win at the New Balance Nationals. She went on to compete at the US Trials and, at the age of 16, placed third in a world U20 record of 54.15 to earn a place on the US Olympic team. She went on to finish fifth in her semifinal at the Rio Games, just nine days after her 17th birthday.

McLaughlin broke the world U20 record again in 2017 with 53.82. She also ran a staggering 49.85 split in the 4x400m at the New Balance Nationals, capping a phenomenal high school career.

In 2018 she started her studies at the University of Kentucky. While her collegiate season was long, it gave her the opportunity to test herself across a range of disciplines. During the indoor season that year, McLaughlin, still aged just 18, ran 36.12 for 300m and 50.36 for 400m – the fastest times ever recorded indoors by an U20 athlete. She also clocked 22.68 for 200m, moving to fourth on the world U20 indoor all-time list. Outdoors, she reduced her PBs to 50.07 in the 400m flat and 52.75 over the barriers, and was victorious in her specialist event at the NCAA Championships.

She turned professional later that year, then became a regular on the international circuit in 2019, winning at the Diamond League meetings in Oslo and Monaco. Her first 400m hurdles loss of the year came at the US Championships where Olympic champion Dalilah Muhammad produced a world record of 52.20 to finish 0.68 ahead of McLaughlin.

Their positions were reversed at the Diamond League final a few weeks later, though, where McLaughlin won in 52.85, beating Muhammad by 1.01.

Muhammad was back to her best at the World Athletics Championships Doha 2019, but was pushed all the way by McLaughlin. Muhammad won in 52.16, once again improving the world record, while McLaughlin finished second in 52.23 to become, at age 20, the second-fastest woman in history.

The friendly rivalry between the two has continued in 2021, most recently with McLaughlin’s record-breaking victory at the US Trials. But with Muhammad on the comeback trail, expect both women to go even quicker at the Olympic Games in Tokyo.