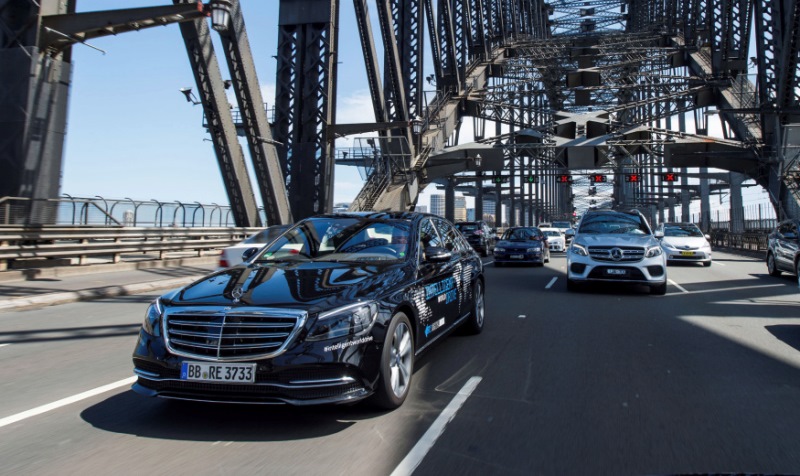 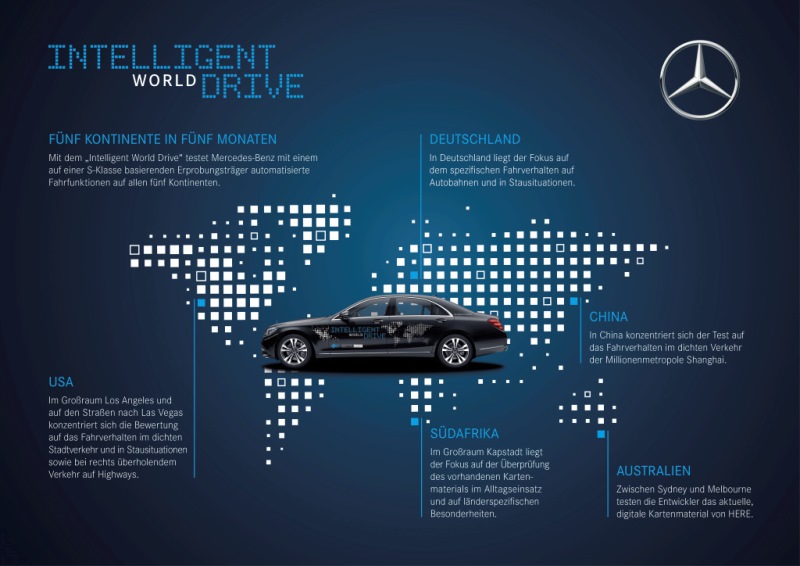 Deep Learning in country-specific, real road traffic plays a central role on the road to autonomous driving. This is shown by Mercedes-Benz Intelligent World Drive, which ended at the Consumer Electronics Show (CES) in Las Vegas after five months.

A test vehicle on the basis of the current S-C lass completed a challenging study trip on five continents in order to “learn” in automated test drives in real traffic. From zebra crossings on Chinese motorways, turning off right from the left-hand lane in Melbourne, Australia, pedestrian traffic on all kinds of roads in South Africa or a temporary driving ban in the immediate vicinity of stopping school buses in the USA – on every continent the S-Class faced challenges which will have an influence on the driving characteristics of future autonomous vehicles.

Automated and autonomous vehicles have to know about these country-specific particularities and understand them in their respective context in order to be able to make the correct driving decisions.

The Intelligent World Drive also underlines just how important the international harmonisation of the legal framework for automated and autonomous driving and its infrastructure is, in particular of lane markings and traffic signs.

“The Intelligent World Drive makes it clear that autonomous driving requires global development activities and test drives” says Ola Källenius, Member of the Board of Management of Daimler AG responsible for Group Research and Mercedes-Benz Cars Development. “Automated and autonomous vehicles need international learning material from actual road traffic in order to understand traffic situations and to be prepared for different scenarios.”

With the test vehicle on the basis of a semi-automated S-Class test drives were carried out in Germany, China, Australia, South Africa and the USA. The differences in the countries give a small insight into the complexity of global challenges in the development of automated and autonomous driving functions.

In particular the national particularities in terms of infrastructure, traffic regulations and the conduct of other road users place very different requirements on the sensors and algorithms of the vehicle. It also becomes apparent just how important high-resolution maps could become for the development of higher automation. Daimler AG is thus involved in the map service HERE and is working on faster implementation and updating of even more precise navigation data.

When it comes to traffic signs for speed limits alone there are many different variants. In the USA, for example, their shape and size are fundamentally different from the usual round metal signs in Europe and China. In Australia, electronic displays with variable speed limits are used. Special displays indicate the current speed limit.

They are equipped with bright white LEDs, a red LED ring and a yellow LED warning lamp and can also depict simple symbols and letters as well as speed limits. In some cases they are positioned next to one another and can change their display within a short time. This demands more of, for instance, the Multi Purpose Camera (MPC) and the quality of digital maps. Speed limits or even data which only apply at certain times of day are equally as challenging.

A prime example of country-specific traffic signs and rules is the “Hook Turn” sign in Melbourne city centre. It controls the procedure of turning off from roads which are also used by trams. If you want to turn off right over the tram tracks in this country with left-side traffic you have to move to the outer left lane and first let the traffic straight ahead and the tram pass before you are allowed to turn off right.

The junction can only be crossed if your own traffic light is on red and that of the cross traffic switches to green. The sensors and algorithms of an automated and autonomous vehicle must be in a position to detect the “Hook Turn” sign, to comprehend the context of the complex turning procedure and take other road users into account.

Road and lane markings are not standardised around the world either. In China, for example, the zebra crossing has a double meaning. In the city it marks a pedestrian crossing, on the motorway, on the other hand, it shows the minimum distance between vehicles driving behind one another. On multi-lane Interstates and Freeways in the USA there are often dedicated lanes for car pools of at least two people.

They can be separated from the other lanes by two uninterrupted yellow lines or by metal guard rails. It can be difficult for the vehicle sensors to detect and correctly interpret them as special lanes. In the USA there are also what are known as Botts’ Dots. These dots for lane marking are plastic or ceramic and also put special demands on lane detection. California is thus the first federal state planning to abolish the Botts’ Dots and to standardise the lane markings for future autonomous driving.

What makes things more difficult is the fact that in some countries signs and lane markings are sometimes missing. So even for experienced drivers it is difficult at mega junctions and on multi-lane roundabouts in the Chinese metropolis of Shanghai to select the correct lane for turning off. In South Africa missing stop or warning signs in front of speed bumps pose challenges when it comes to the performance of sensors and the quality of digital map data.

Detect country-specific traffic situations and understand them in context

Another special feature of road traffic in the USA are school buses and the traffic regulations associated with them. As soon as they stop the traffic in their immediate vicinity must also stop. No vehicle is allowed to pass, not even in the opposite direction. Automated and autonomously driving vehicles must learn to distinguish school buses from all other vehicles in relevant traffic situations, and recognise whether they are stopping to let children get in and out.

Equally challenging for vehicle intelligence is pedestrian conduct in South Africa, which bears no resemblance to that in Europe, Australia or the USA. Not only are there many more pedestrians about here, they also frequently walk on the road itself and sometimes unexpectedly cross the carriageway. Future systems must reliably detect such pedestrians even at higher road speeds and interpret their movement correctly.

Overtaking manoeuvres on single-lane roads are the norm in South Africa, with the slower vehicle driving on the hard shoulder and the overtaking vehicle driving past it at clear points in spite of the broken line. Future vehicles must learn to use this tolerance depending on the situation. To do this they would have to be able to tell whether the road is free and clear enough for overtaking – or whether an overtaking manoeuvre is too dangerous due to bends or oncoming traffic. It goes without saying that appropriate infrastructure measures help to facilitate faster and more extensive autonomous driving.

For example, where the danger of wild animals crossing is concerned kangaroos in Australia and springboks in South Africa represent a particular challenge. Depending on their posture they have a different shape and are therefore very difficult to identify definitively. According to statistics from an Australian insurance company, kangaroos cause nine out of ten road accidents in which animals are involved nationally.

Worldwide development activities are the key to systems which learn

The special country-specific features to which the S-Class test vehicle was subjected on five continents underscore the necessity of worldwide development activities and test drives. This is the only way to develop learning-capable systems and algorithms which are in a position to cope with a multitude of situations reliably and safely. Alongside programming concrete routines for clearly defined applications, this mainly involves establishing strategies for solutions in unexpected situations. All the information and experience gathered on the Intelligent World Drive are flowing into the further development of more highly automated systems on the road to autonomous driving.

Thanks to the global Research & Development network of Daimler AG it is possible for Mercedes-Benz to incorporate potential country-specific traffic conditions into the development of automated driving functions and thus put them in the vehicle more quickly. The Mercedes-Benz Research & Development Centres in North America and China have their own test vehicles which collect local information on infrastructure and traffic habits plus carry out test drives for validation of driver assistance systems in the field.

In other core markets Mercedes-Benz is increasingly cooperating with the local market companies. Since spring 2017, for example, Mercedes-Benz Australia has been testing automated driving functions in Australia and New Zealand in close cooperation with the Research and Development Centre in Germany. The Intelligent World Drive supplements these extensive validation projects. With a multitude of test vehicles Mercedes-Benz is gathering information internationally for the continuous advancement and improvement of automated driving functions.

To enable more highly automated and autonomous driving functions to be tested in real road traffic and then to enter series use, further international harmonisation of the legal framework is necessary. There is a need for action, especially in relation to international agreements on road traffic law, which set the binding framework for national legislation and which currently still compulsorily require a driver. Further changes are important with regard to vehicle certification and data storage.

CASE – on the way to autonomous driving

Autonomous driving is one of the four strategic areas for the future which form an integral part of the corporate strategy of Daimler AG under the acronym CASE. CASE – these letters will shape the future of mobility. They stand for networking (Connected), autonomous driving (Autonomous), flexible use (Shared & Services) and electric powertrains (Electric). The aim is to shape intuitive mobility for the customers through intelligent dovetailing of all four CASE fields.