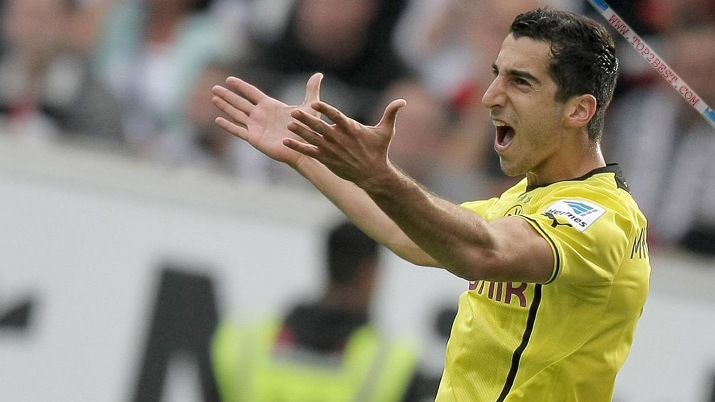 Borussia Dortmund could be set to lose another star for next season amidst reports Chelsea and Arsenal target Henrikh Mkhitaryan has turned down a contract extension with the German giants.

“Why should we extend now? Micki (Mkhitaryan) still has a contract until 2017 and we’ll continue thinking about his future after that,” Mkhitaryan’s agent Mino Raiola told German daily Bild.

With Dortmund’s captain Mats Hummels having already signed for rivals Bayern Munich next season, Dortmund have been trying to tie down top midfielders Mkhitaryan and Ilkay Gundogan, who is tipped to join Manchester City, on long-term deals.

Dortmund CEO Hans-Joachim Watzke refused to comment on the situation with Mkhitaryan.

The Armenian international has had a stellar season at Dortmund, scoring 23 goals and creating another 32 in all competitions, as Borussia finished second only to Bayern in Germany’s top flight.

The 27-year-old netted a hat-trick for Armenia on Sunday in their 7-1 victory over Guatemala, and had a hand in six of their goals, with their next international on Thursday against El Salvador.

According to reports, Raiola wants a double exit clause put into Mkhitaryan’s contract that he may leave if current coach Thomas Tuchel leaves or if there is an offer from a top club.

Dortmund are in danger of having their squad picked apart.

Top-scoring Gabon striker Pierre-Emerick Aubameyang, who hit 39 goals for the club last season, has reportedly told his national team coach Jorge Costa he will join another club for next season.