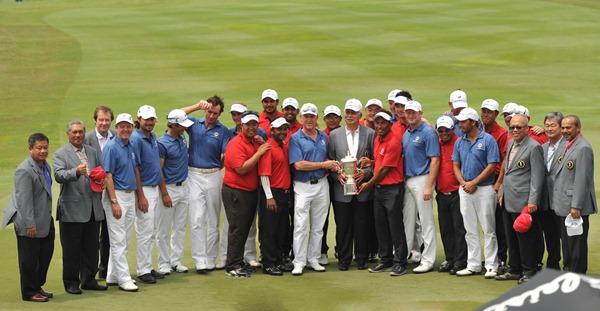 MALAYSIAN Prime Minister Datuk Seri Mohd Najib Abdul Razak announced that the Government has committed to hosting the next two editions of the EurAsia Cup after a stunning final day in which Team Asia fought back from four points down to secure an enthralling 10-10 draw, resulting in the inaugural trophy being shared with Team Europe.

The Prime Minister said: “I am delighted to confirm that the next two editions of the EurAsia Cup will be played here in Malaysia, in 2016 and 2018.  Our aim is to continue the fantastic growth the sport of golf has already seen in Asia. We have seen today why this game is so popular and therefore why I am standing here now making this statement. This event has the full support of the Malaysian government.”

In front of a packed 18th green at the tournament’s closing ceremony at Glenmarie Golf and Country Club, the Prime Minister, a keen golfer himself, continued: “We have seen this week that golf is alive and well in this part of the world. I want to extend my thanks to both captains, Miguel Jimenez and Thongchai Jaidee, for helping make this a great first edition of the EurAsia Cup. We hope to see them both here again in two years’ time for the second edition of the tournament.”

Team Europe skipper Jimenez was one of only two European players to win in the 10 singles matches played on the final day in front of large galleries. Team Asia Captain Thongchai Jaidee beat Graeme McDowell 3&2 to set the tone for a day dominated by Team Asia, who won seven points in an absorbing contest which ensured the match was halved.