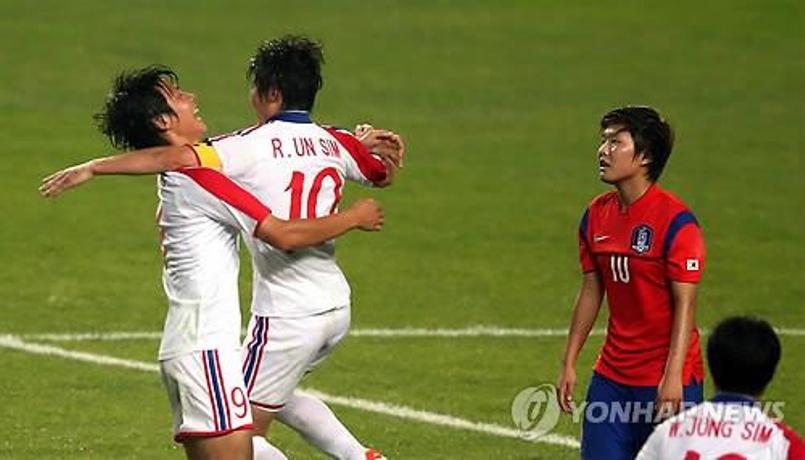 North Korea beat hosts and arch-rivals South Korea 2-1 with an injury-time goal Monday to set up a priceless chance for revenge against Japan in the Asian Games women’s football final.

Substitute Ho Un-Byol seized on a defensive error to fire in the winning goal just seconds from the end. North Korean tears of joy were matched by the South’s cries of desperation.

Japan, who beat the North in the 2010 Games final, hammered Vietnam 3-0 in their semi-final through goals from Mizuho Sakaguchi and Kana Osafune, and a header from Yuika Sugasawa in the 74th minute.

A bizarrely divided Korean crowd cheered on the two sides as they met for the first time in an Asian Games semi-final.

About 1,000 older supporters of the South Korean hosts were matched by another 1,000 middle-aged members of a cheer squad for North Korea and demanding reunification of the peninsula torn apart since the 1950-53 Korean War.

A delegation of about 30 North Korean athletes and the 500 regular South Korean football fans were drowned out by the political cacophony.

There was no trouble between the two Korean women’s sides. With national honour at stake they battled for every ball for 90 minutes.

Jeong Seol-Bin put the South ahead in the 12th minute with a 25-metre free kick that went under the body of the North’s goalkeeper Hong Myong-Hui. Ri Ye-Gyong equalised before half-time.

Both sides then had chances — Ji So-Yun thundered one 25 metre shot against Hong’s crossbar — but the game seem destined for extra time in the rain until the South’s defensive error gifted victory.

Lim Seon-Joo made a panic header back that goalkeeper Kim Jung-Mi could not clear. The ball fell to Ho who made no mistake and was quickly buried under a mass of celebrating players.

South Korean coach Yoon Duk-Yeo was among those reduced to tears. His North Korean counterpart Kim Kwang-Min praised the players for their fightback after giving up the first goals. “Our players were running on fumes in the second half,” he said.

The North, who have twice won the Asian Games title and want a third to boost their preparations for next year’s World Cup, now take on a Japanese side who beat them 1-0 four years ago.

North Korea beat the Japanese women in a penalty shootout in the 2006 final in Doha.

For Japan, the semi-final against Vietnam was in comparison a stroll before the final on Thursday. They had more than 20 shots while the Vietnamese had barely a chance. – Agence France-Presse