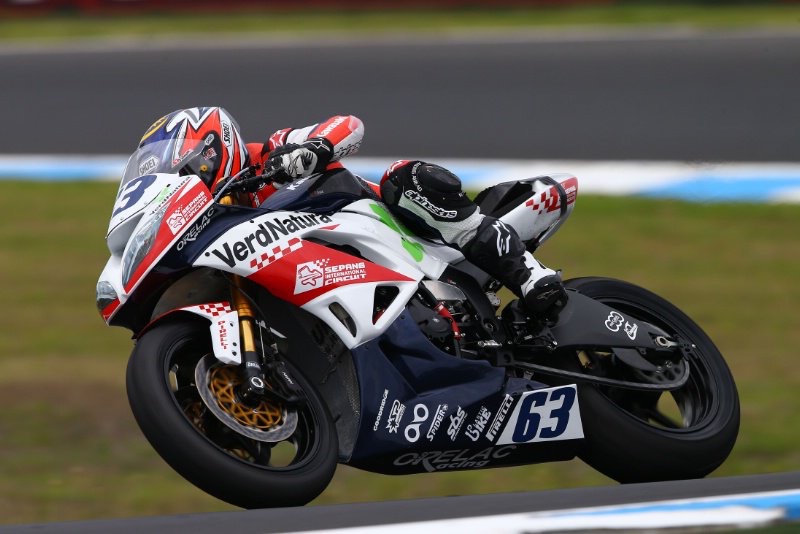 Orelac Racing VerdNatura’s Zulfahmi Khairuddin took 13th place in the opening round of this year’s World Supersport Championship at Phillip Island today and gave the team their first points of the season, but it could’ve been more. Fahmi was seventh after four laps, but arm pump slowed him down and he was unable to maintain his fast pace as the race wore on. His teammate Nacho Calero suffered a poor start and was 22nd at the end of lap one. He spent the race trying to play catch-up but the main group had pulled away and he was left with a long gap between his group and Fahmi in 13th.

Zulfahmi Khairuddin -13th
“I started the race from 17th on the grid, but I made a very good start and was ninth at the end of the first lap. I improved to seventh after four laps and was very comfortable chasing the lead group until my left arm began to hurt. The clutch on the bike is a bit heavy at the moment and I found it a big effort as the race went on. This problem slowed me down. I was passed by some riders and could do nothing about it. Until the problem, I had felt very comfortable on the bike and so I am confident that I can run in the top seven once we improve the clutch feel.”

Nacho Calero – 18th
“From my grid position, I really needed a good start, but unfortunately I didn’t get one and found myself 22nd at the end of the first lap. Then it was difficult to make up much ground. After a while I could see lots of spots on rain on my visor and I didn’t feel confident enough to push really hard, so I rode steadily and made sure I brought the bike home safely. After missing quite a lot of time in the tests at the start of the week, I have now been able to put in a lot of laps on the bike and I am very happy with the feeling of it.”

Giulio Bardi (Team Manager)
“We saw today that Fahmi can stay with the lead group OK. If he didn’t have the problem with his arm, I am sure he would have had a very solid top ten finish. Nacho’s lap times were good in practice and in some of the race, but his poor start left him with far too much to do. It has been a very interesting debut for us. There’s a lot of potential in the team and I am looking forward to seeing the improvements as the season goes on.”

Jose Calero (Team Owner)
“I am happy because this is our first time out with this team and everybody has worked hard and done well. Since we started this project there has been a lot of progress and I am sure that the next round in Thailand will see a lot more improvement.”