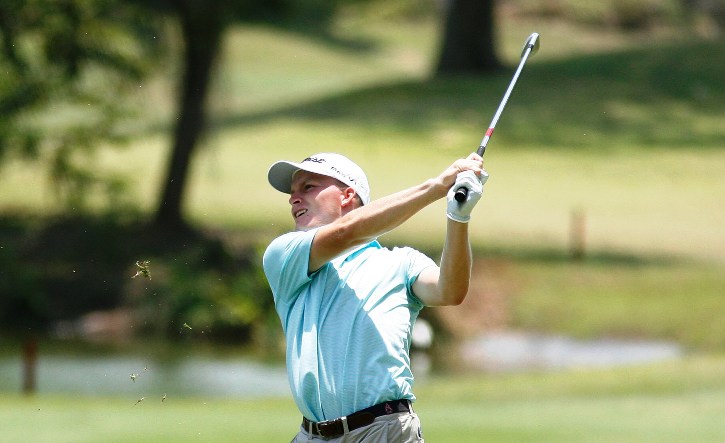 American John Michael O’Toole put himself in prime position for a second Asian Development Tour (ADT) win after carding a three-under-par 68 to lead by one shot in the penultimate round of the ICTSI Manila Southwoods Championship on Friday.

O’Toole, who capped a stunning course record 61 after returning in the morning to complete his second round, marked his card with five birdies against two bogey to seize the outright lead on 13-under-par 200 total at the Manila Southwoods Golf and Country Club’s legends course.

Thai duo Suradit Yongcharoenchai and Pijit Petchkasem shared second place following respective rounds of 66 and 69 while newly-turned professional Jobim Carlos of the Philippines returned with a 66 to take fourth place on his own on 202 at the US$60,000 ADT event.

Overnight leader Gavin Green of Malaysia slipped back with a 72 to share fifth place with local prospect Keanu Jahns (65), Thai duo Poom Saksansin (66) and Donlaphatchai Niyomchon (67) on 203 at the ICTSI Manila Southwoods Championship.

“I had a great start to the day coming back to birdie two of my remaining holes for Round Two and setting a course record for the first time in my golf career. That felt very good,” said O’Toole, who is the younger cousin of Casey, the reigning ADT Order of Merit champion.

Starting the round with a one-shot deficit, O’Toole dropped a shot on third but quickly asserted himself but picking up three birdies to turn in 34. He stumbled with another bogey on 12 but bounced back with two more birdies on his way home.

“I got off to a slow start but I just keep grinding out there. I gave myself some good opportunities and made some putts for birdies. I am very happy with how I finished. You got to drive it well and hit your wedges well to score. Some of the par-threes are tough so you got to hit good iron shots too.

“I will try my best tomorrow. I know I have to play really well to win. I will stay aggressive and hopefully I can keep it rolling tomorrow,” added the 23-year-old O’Toole, who just claimed his breakthrough win in Malaysia last month.

O’Toole, ranked ninth on the current ADT Order of Merit, will take home the winner’s prize purse of US$10,500 and break into top-five should he emerge victorious on Saturday. The top-five finishers on the Order of Merit at the end of the season will be rewarded with Asian Tour cards for 2017.

Like all other ADT events, the ICTSI Manila Southwoods Championship will offer Official World Golf Ranking (OWGR) points, which will be key for players vying to qualify for the Olympic Games in Rio de Janeiro this August.