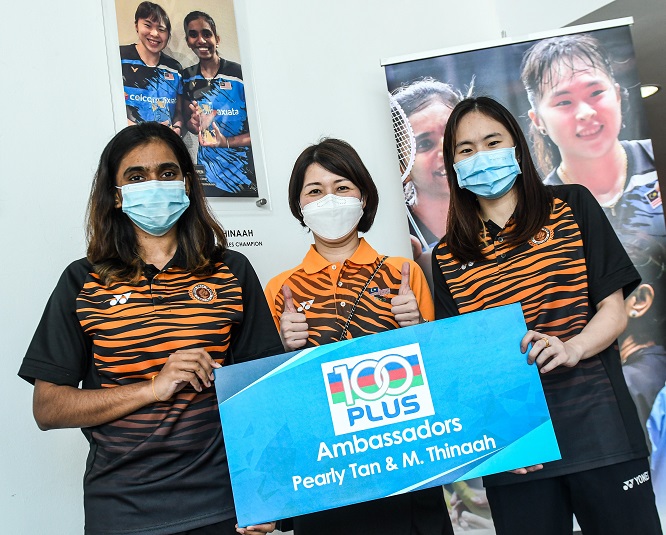 Their enormous potential and stunning performances including sensationally winning the Swiss Open had caught the attention of 100PLUS, Malaysia’s No. 1 isotonic beverage. Today, 100PLUS announced the signing of Pearly Tan and Thinaah Muralitharan as Brand Ambassadors, following in the footsteps of several leading national badminton players.

“Pearly and Thinaah are an exciting pair. They have tremendous potential and if they continue on this trajectory will soon be among the leading partnerships in the world. We have followed them over the last few years and have been impressed with their progress,” said Ms Leong Wai Yin, Head of Marketing, F&N Beverages Marketing Sdn Bhd today.  “It was an easy decision to sign Pearly and Thinaah as 100PLUS Brand Ambassadors.”

Wai Yin revealed that Pearly and Thinaah, currently 19th in the BWF women’s doubles rankings, have signed a two-year sponsorship deal with 100PLUS.

Had it not been for Covid-19 last year, the pair may have wrested several more titles. With competitions cancelled due to the pandemic, they focussed on their training and worked hard for months. Their efforts paid off when as an unseeded pair, they outplayed their opponents and created history as the first Malaysians to win a women’s title at the Swiss Open.

“They have a bright future and we look forward to watching them develop into a leading doubles pair and start winning more titles,” said Wai Yin.

Pearly, 21, explained that the support of a major brand like 100PLUS, which has always supported the nation’s top players, provided a huge boost to their confidence. “100PLUS is synonymous with badminton in our country and we are encouraged by the confidence they have in us. The players 100PLUS have supported have all gone on to win major titles including medals at the Olympics. We will continue to work hard and aim for more success on the world stage.”

Their next major assignment will be the Sudirman Cup in Finland from Sept 26 to Oct 3 and the Uber Cup in Denmark from Oct 9 to 17. BAM had announced their inclusion in both tournaments on Saturday.

As part of the sponsorship, Pearly and Thinaah will be provided with 100PLUS for their training and competition. They will benefit from consuming 100PLUS which has a special non-carbonated formulation to quickly rehydrate and replenish the fluids and electrolytes lost during exercise and sport, and re-energises with added Vitamin B3, B6, B12.

100PLUS is the Official Isotonic Beverage and the Recommended Drink of the National Sports Council.