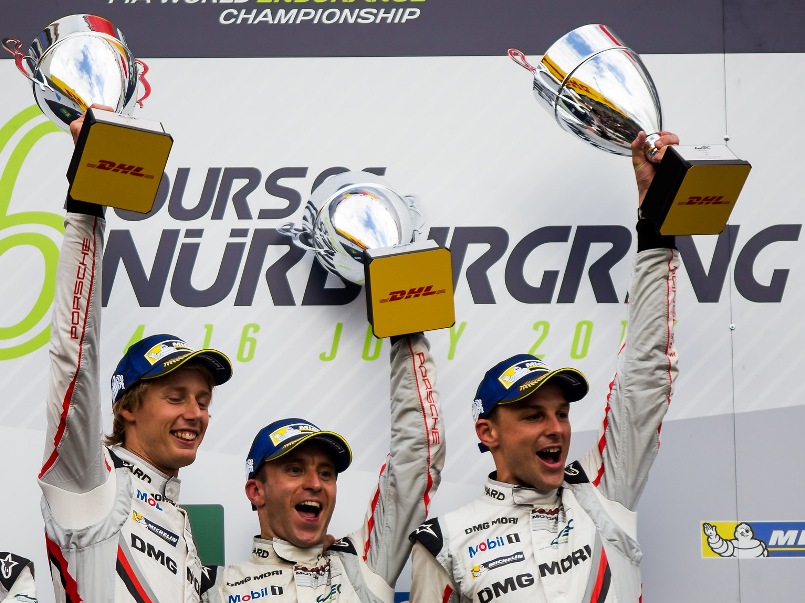 Timo Bernhard, Brendon Hartley and Earl Bamber took their second win of the 2017 FIA World Endurance Championship season in the No.2 Porsche after a thrilling battle with the sister No.1 919 Hybrid at Nurburgring this afternoon.

The two Porsches were rarely more than four or five seconds apart during the entire race but it was the reigning title-winning car which triumphed to give both Bernhard and Hartley their 10th WEC wins and Bamber his 3rd.

It was a thrilling race between the two Porsche 919 Hybrid racers which saw the lead swapped numerous times. At one stage, in the fourth hour, Bamber lost the lead to his fellow 2015 Le Mans winner Nick Tandy, after having to take avoiding action when Tor Graves spun his CEFC Manor TRS Racing LMP2 car in front of the Kiwi at the chicane.

The result today ensures that Hartley, Bernhard and Bamber have extended their lead in the championship to 30 points as the European leg of the 2017 WEC comes to an end.

André Lotterer, Neel Jani and Nick Tandy ensured a Porsche 1-2 at their home event, taking the runners-up position after leading for large periods of the race but the trio lost the lead at the final pit stop.

The pole sitting No.7 Toyota of Kamui Kobayashi, José Maria Lopez and Mike Conway took third place after leading in the early stages as Kobayashi converted pole position into track position. The Toyota TS050 HYBRID fell back, however, and finished just under a lap down on the winning Porsche.

Winners of the first two races at Silverstone and Spa, the No.8 Toyota Gazoo Racing trio of Anthony Davidson, Kazuki Nakajima and Sébastien Buemi, suffered a frustrating race as an enforced change of fuel pump on the first lap put them out of contention. The car did though recover well, and claim fourth place points.