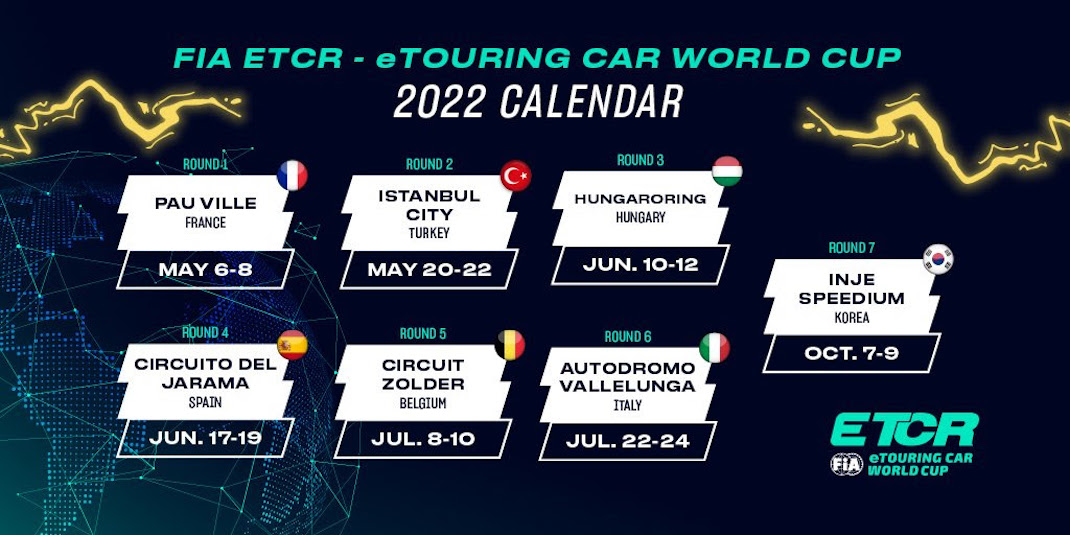 Touring car racing enters an all-new era in 2022 as PURE ETCR evolves into the FIA ETCR – eTouring Car World Cup, with an expanded seven-event schedule set to showcase the mind-blowing power of electric propulsion to greater levels than ever before.

Following the global interest in the world’s first all-electric, multi-brand touring car series during its groundbreaking 2021 season that caused an electroshock through motorsport, the step-up to FIA World status creates an even greater opportunity for the world’s leading car manufacturers to display their latest electric cars to the planet.

Agreed by the FIA Touring Car Commission and rubber-stamped by the FIA World Motor Sport Council in Paris today, the schedule, created by series promoter Discovery Sports Events, marks the first time that drivers and manufacturers of all-electric touring cars will compete for FIA World titles.

Hungary for action: Home to some of the most passionate touring car fans on the planet, as well as the Zengo and M1RA teams, the Hungaroring event moves from August to June.

Jarama plugs in: Bringing FIA World-status motorsport back to Spain’s capital for the first time in 33 years, where the locals are bound to get behind the home heroes.

Zooming into Zolder: Another classic track that’s played host to all kinds of touring car series since the 1960s makes its debut in 2021, with more strong local support expected.

Summer nights: At the height of the European summer, expect evening action as the sun goes down at Italy’s first dedicated electric mobility hub, Autodromo Vallelunga.

Intrigue at Inje: A much-awaited first trip to Inje Speedium should host the title showdown as part of a double-header with the FIA WTCR.

**Subject to agreement with circuit promoter

Powering up for a new season – All entrants will once again drive cars created around the WSC Group’s ETCR concept, meaning that with a peak power of 500kW (670hp) available to each driver, FIA ETCR will showcase the most powerful touring cars ever built to battle for an FIA World title. Power from the Williams Advanced Engineering battery pack is fed through Magelec Propulsion gearbox, motor and inverters. BrightLoop converters transform voltage for low-power items while the charging process – powered by HTWO Hydrogen generators – takes a car from zero to full battery in under an hour at paddock-based Energy Station.

Tweaked event format for 2022 – This year debuted a world-first in international circuit racing with the traditional race format thrown away and replaced by a series of short, sharp Battles, in which drivers accumulate points and build towards the DHL SuperFinals. The FIA Touring Car Commission and FIA World Motor Sport Council have approved a number of new innovations to the Sporting Regulations for the 2022 season, aimed at making the on-track action even more spectacular and sparking viral debate among new legions of fans. Details will be announced in due course.

Sustainability commitments remain a priority –  With the majority of the calendar centred on Europe, road transport will be utilised wherever possible, while the Asian finale at Inje Speedium, South Korea, will be reached via sea freight, creating 90 per cent carbon emissions than the equivalent trip via air. The presence of HTWO’s hydrogen generators at the Energy Station mean the only by-product of the charging process will be water, while Goodyear’s all-weather race tyre means fewer units need to be manufactured, transported and disposed of, again reducing environmental impact. On top of this, FIA ETCR will continue to work with sustainability partners to record and reduce the environmental impact of the series in all the countries visited.

François Ribeiro, Head of Discovery Sports Events, the FIA ETCR – eTouring Car World Cup promoter, said: “This is a huge step forwards for electric touring car racing. We knew when we launched PURE ETCR that now was the big opportunity to not only provide automotive manufacturers with a global showcase for their electric cars, but also to introduce all the positive aspects of electric mobility; incredible power, efficiency and sustainability into the homes of a worldwide audience. Now, with the support of the FIA, we take the next step. The FIA ETCR – eTouring Car World Cup will give electric mobility an even greater representation and within a sporting framework that’s recognisable across the world. With visits to Pau and Istanbul to begin the season, we can not only highlight the mind-blowing performance of electric cars to fans at one of the world’s most iconic street circuits, but also introduce a vast new audience to the concept in a city that has never held racing in its urban zone before. We’ll mix this with circuits like Zolder and Hungaroring, which have the cut-and-thrust of door-to-door touring car racing running right through their histories and introduce a few tweaks to the sporting format aimed at creating even more on-track action and at appealing to a younger audience.”

Alan Gow, FIA Touring Car Commission President, said: “The announcement of the first FIA ETCR – eTouring Car World Cup calendar is a significant milestone for the FIA Touring Car Commission and an exciting new development on the touring car scene. We believe that this new concept will be attractive and relevant to manufacturers, with a sustainable seven-round schedule a good starting point. The calendar represents a good mix of established, classic tracks with new venues, including street circuits.”