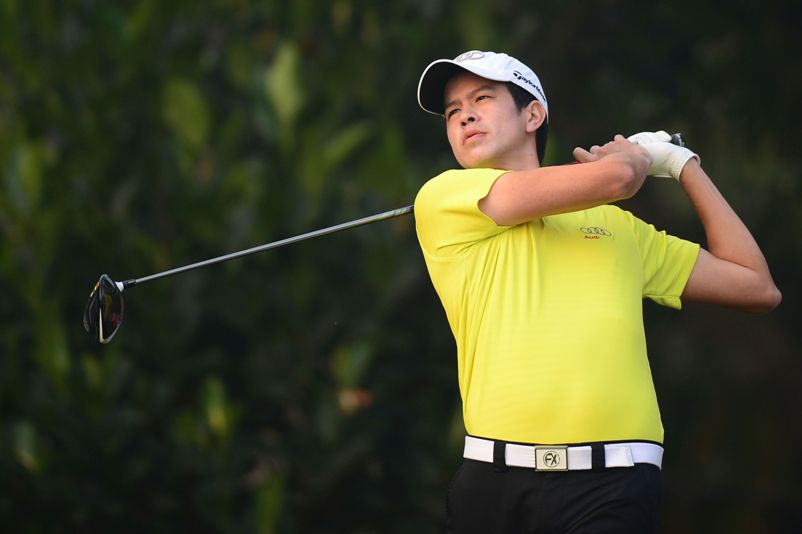 Singapore’s Quincy Quek produced an impressive back nine performance to sign for a bogey-free five-under-par 67, taking the halfway clubhouse lead by one shot at the weather-disrupted PGM Northport Championshipon Thursday.

Play was suspended at 10.55am local time due to lightning threats before resuming six hours and 35 minutes later. It was later abandoned for the day at 7.19pm due to fading light at the Glenmarie Golf and Country Club’s Garden course.

Quek, who opened with a 68, blasted five birdies on his back nine after the suspension to sit atop the leaderboard on nine-under-par 135 total at the RM200,000 (approximately US$44,600) Asian Development Tour (ADT) event.

Thailand’s Pannakorn Uthaipas posted a second straight 68 to sit in second place alongside American duo Nicholas Paez and John Michael O’Toole, who carded matching 67s, in what is the third leg of the ADT schedule this season.

Quek, who welcomed his baby daughter two months ago, reeled in nine straight pars from the first before the sirens went off to signal the suspension of play.

The 30-year-old Singaporean, however, burst into life with a superb back nine 31 when he returned to the course after what has been a long wait in the clubhouse.

“It was a good test of golf on the front nine. I didn’t miss any greens. I just didn’t judge my putts well. I was able to hit it to within 20 feet but wasn’t able to sink those putts for birdies. I managed to make some good saves for pars though,” said Quek, a one-time winner on the ADT in 2012.

“I stayed patient out there and that paid off when I headed back onto the course for my back nine after the suspension. I gave myself a lot of chances for birdies. My approach shots were good. I was able to hit it close to within eight feet or so.

“I wasn’t thinking much about my round during the suspension. I was just wondering what my wife and my daughter are doing back home. They have been a great motivation. I got to make my time spent away from home worthwhile somehow,” added a beaming Quek.

Order of Merit leader Brett Munson of the United States posted a second consecutive 70 to stay five shots off the pace in tied-12th while defending champion Gavin Green of Malaysia moved to tied-18th position following a commendable 68.