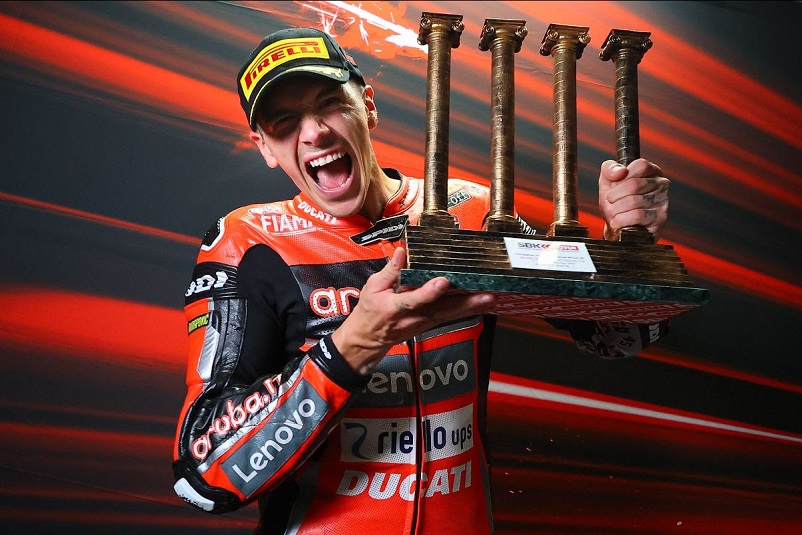 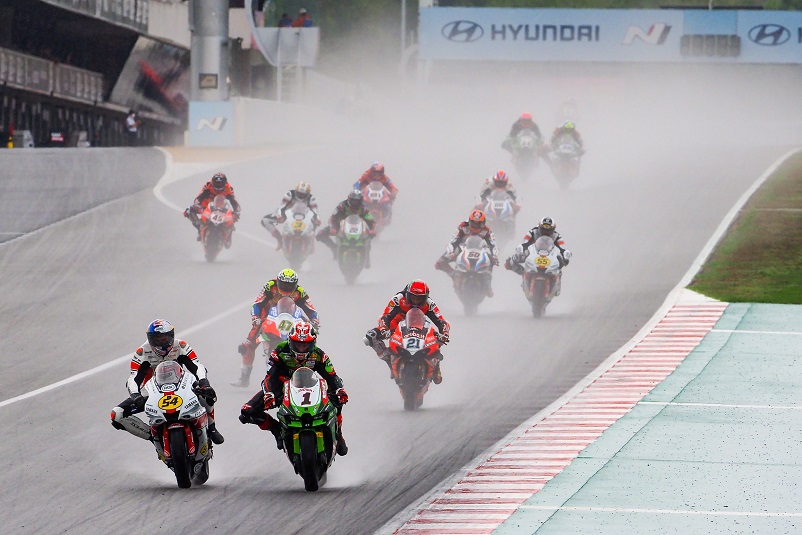 A pre-race rain downpour provided the perfect recipe for Race 1 at the Hyundai N Catalunya Round as Scott Redding (Aruba.it Racing – Ducati) put in a late surge for victory at the Circuit de Barcelona-Catalunya with Axel Bassani (Motocorsa Racing) claiming his first MOTUL FIM Superbike World Championship podium, as the fight for the Championship took yet another twist in Spain.

P1 Scott Redding (Aruba.it Racing – Ducati)
“I came that far, I thought I’m going all the way. If I go down from third, I don’t want two Ducatis to beat me at the end of the day! I pushed all the way to the end. I got off the start, big wheelspin at the start when we crossed the start line, so I dropped back. No grip at the beginning, a few big moments. I thought it wasn’t my day. We didn’t have the rain setup. Then there was a moment I thought maybe I can push a little bit more, and I was able to catch. It was good to have Michael in front because he was pulling me a bit. It just goes to show that you should never give up.”

P2 Axel Bassani (Motocorsa Racing)
“It’s a very strange situation but I’m very, very, very happy! It was such a difficult race because the asphalt was very slippery. I tried to stay focused. It was very strange to stay with Jonny and Toprak for the first time. A lot of emotions. I’m very happy. I say thank you to all my team, my family. I cried for the entire last lap because it was emotional! Fantastic.”

P3 Michael Ruben Rinaldi (Aruba.it Racing – Ducati)
“I’m really happy because there were three Ducatis at the front. Unfortunately, before the start, the rain came. We had strong pace in the dry, so I was a little bit upset. I said I need to go anyway. On the last laps, I had a problem with the gas and also, I couldn’t see anything because it rained a lot. I want more, but it’s okay. Tomorrow in the dry, we will do more.”

At the start of the race, Jonathan Rea (Kawasaki Racing Team WorldSBK) found himself down in tenth at the first timing point but battled his way back to the lead after Toprak Razgatlioglu (Pata Yamaha with Brixx WorldSBK), who was forced to retire from the lead of the race on Lap 15 with a technical issue. The final results mean Rea has a six-point advantage over Razgatlioglu in the Championship standings.

As Rea pulled away at the front, Axel Bassani (Motocorsa Racing) battled his way to the front and fought with Razgatlioglu in the first half of the race before the pair closed the gap to Rea while battling. Eventually they bought found their way past the six-time Champion before Bassani took the lead when Razgatlioglu pulled over with the technical issue.

In the closing stages, Redding passed teammate Rinaldi for second before making a move on the Independent Ducati of Bassani for the lead with a handful of laps to go as he claimed the lead of the race, ahead of Bassani and Rinaldi who secured Ducati’s first 1-2-3 finish since Assen 2012, Race 1, where an Italian rookie stood on the podium for the first time in the form of Davide Giugliano, who also finished second.

There was a strong showing for Team HRC with Leon Haslam finishing in seventh place and Alvaro Bautista in ninth, sandwiching polesitter Tom Sykes (BMW Motorrad WorldSBK Team), with the British rider falling down the order right from the start of the race but managed to fight back to claim eighth place. Chaz Davies (Team GoEleven) completed the top ten, finishing just 0.008s ahead of Kohta Nozane (GRT Yamaha WorldSBK Team) who finished as the lead Yamaha rider. Nozane got a great start from 12th to fight in the lead group in the early stages of the race.

Garrett Gerloff (GRT Yamaha WorldSBK Team) did not take the race start after a crash on the Sighting Lap as he lost the rear of his Yamaha YZF R1 machine on the kerbs on the exit of Turn 10 and on the run through Turn 11, damaging his bike and preventing him from taking the start of the 20-lap encounter. – www.worldsbk.com

Championship Standings (after Race 1, Round 9)