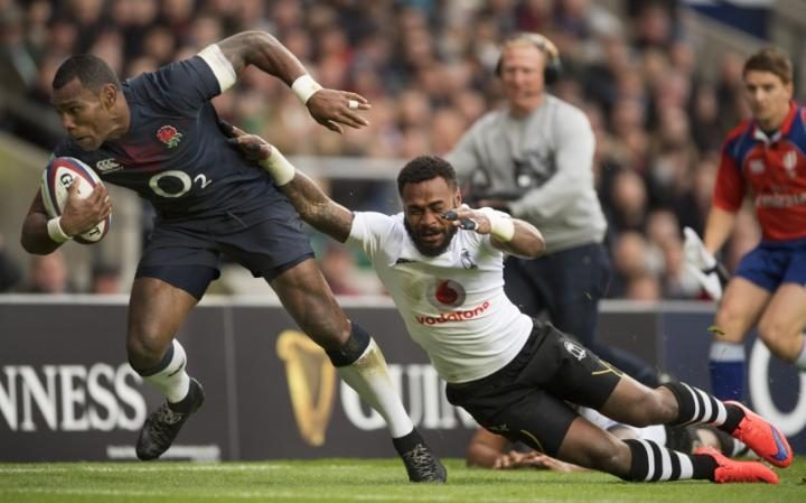 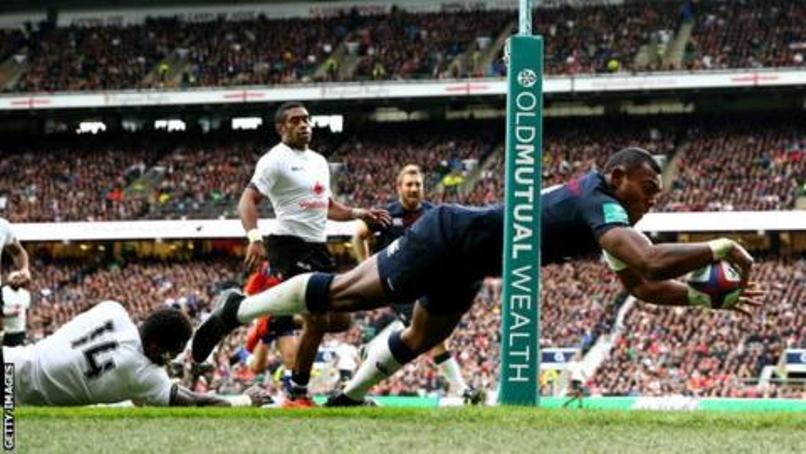 Fiji-born England winger Semesa Rokoduguni scored a brace as Eddie Jones’ team buried an overpowered Fiji under an avalanche of tries to record their biggest win over the Pacific Islanders in a one-sided 58-15 contest at Twickenham on Saturday.

Jones saw his side pick up where they left off in last weekend’s win over South Africa, overpowering their opponents to run in nine tries.

England made it 12 successive wins, and 11 of those coming since Jones took over the reins after the World Cup failure.

They are now just two victories away from England’s best ever winning streak which was the 14 under Clive Woodward.

Fly-half George Ford admitted: “It’s another good win but we know we can play better. We did a lot of good things right in the opening half but then let ourselves down a bit and allowed them to cross for three tries.

“We will have to improve against Argentina next weekend because they will come here believing they can beat us. But we’re enjoying this winning habit and want it to continue.”

Jones requested plain old fish and chips rugby from his players – nothing too exotic, fanciful or daring. And he got a no-nonsense approach to the game and a few frills and thrills on top as his team feasted on a glut of sumptuous tries.

Five tries in the opening 26 minutes left Fiji dazed as England blitzed their opponents into submission and led 34-10 at ther break.

They took less than four minutes to break through the visitors’ defence for the opening score. Owen Farrell fed Jonathan Joseph who found a big gap and charged over.

And when the Fijians fell over themselves trying to stop another England attack, left wing Elliot Daly coasted over for the second try from 30 metres. It was Daly’s first Test try in his seventh cap and Farrell converted both tries.

You already sensed a hard afternoon for the visitors lay ahead. That feeling increased with Rokoduguni bursting over for what was also his first England try in his second cap having made his debut two years ago against New Zealand.

The Twickenham crowd were lapping up the one-sided affair, and the white Fijians shirts just could not halt the dark blue tide as next it was flanker Teimana Harrison’s turn to grab his first try in his third England appearance.

Fiji made their first attack on the England line pay dividends as the ball was swept across to Nemani Nadolo, and even Rokoduguni, no slight figure himself, had little chance of stopping the most powerful back in world rugby at full tilt. Nadolo burst over and his side were on the board.

Surprisingly, Farrell kicked a penalty when England were back on the attendancy but Fiji had the final say of the first half with lock Leone Nakarawa forcing his way across for his side’s second try.

Suddenly Fiji were awake and a real threat. The confidence returned and when full-back Metuisela Talebula surged over for an early second half try the odd alarm bell began to ring amongst the hosts.

Just moments later Alex Goode dived over for his first international try to give England regained dominance and Farrell converted. And Josh Matavesi’s floated pass was snaffled by Joseph who strolled over for his second.

The visitors’ defence was split apart twice again as first Rokoduguni and then Launchbury crossed with no tackler in sight as England cruised to victory.

England are now two wins from two games in this home Autumn series but they know Argentina will be tougher opponents next Saturday.

Fiji captain Akapusi Qera admitted: “We were half asleep in the first half and England came out firing at us. They are one of the top teams in the world and our poor start cost us.” – Agence France-Presse