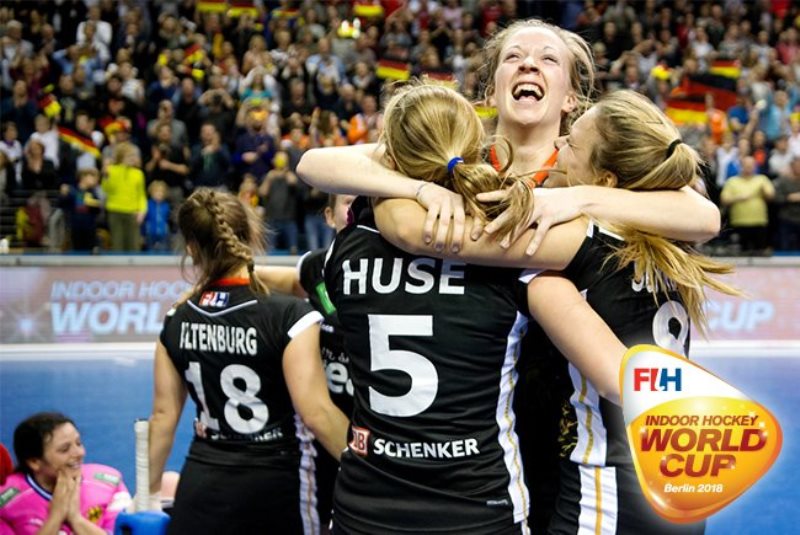 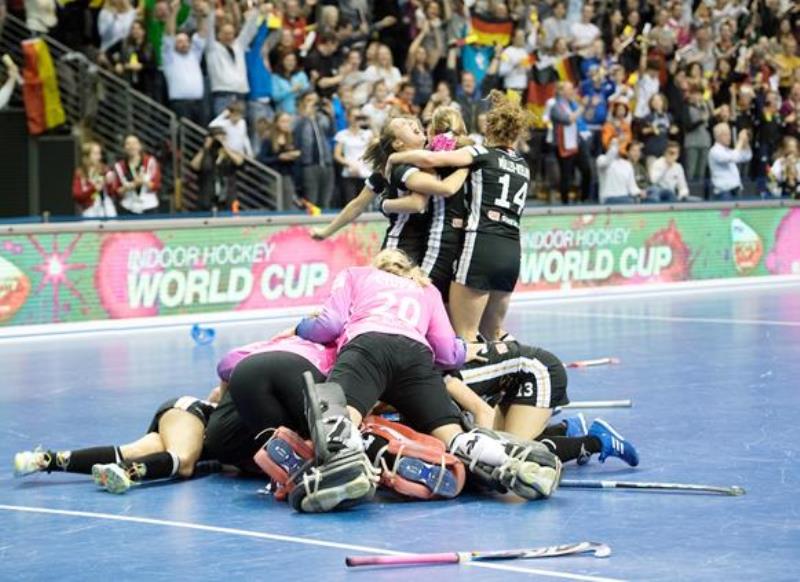 Berlin, Germany: Anne Schröder scored the winning goal as Germany overturned a 1-0 deficit against the Netherlands to win the 5th Women’s Indoor Hockey World Cup 2018 in front of an sell-out, 8000-strong crowd at the Max-Schmeling-Halle.

The venue was a cauldron of noise throughout the contest, with the passionate home fans determined to cheer their team to victory. A scoreless first half saw both teams go close, with Die Danas going closest before the Dutch took the lead six minutes after half time when Lieke van Wijk scored from a penalty corner.

Three minutes later the Germany fans were given something to cheer about when they were awarded a penalty stroke. The opportunity was dispatched with clinical precision by 20-year-old Nike Lorenz, who showed a level of calmness and composure beyond her years to bring her team back into the match.

The winning goal arrived eight minutes from the end of the contest through Anne Schröder, who surged down the right before firing past Dutch shot-stopper Alexandra Heerbaart and sparking scenes of sheer jubilation in the stadium. The Dutch pressed hard for an equaliser but Germany held firm to dethrone the title holders claim a third Indoor World Cup success, adding to those earned at the Leipzig 2003 and Poznan 2007 events

“I cannot explain how I am feeling right now”, said Germany’s Luisa Steindor after the match. “The noise of the crowd was unbelievable. It was such a tough game but also such an entertaining game. We have had a few challenges in the tournament and this match was no different, but to come back from being a goal behind is the best kind of victory you can have.

Asked whether Germany had saved their best performance for the final, Schröder said: “One hundred percent. We had some challenges because we didn’t take some of the early chances we had, but to produce the fightback we did was just wonderful.”

Belarus were the winners of the bronze medal game, battling to a 2-1 victory over Ukraine. It is the first time that Belarus have finished on the podium at an Indoor World Cup, going some way to avenging the defeat that they suffered at the hands of Ukraine in the bronze medal game at the Poznan 2011 event.

Ukraine – who were defeated by Netherlands in Saturday’s semi-finals – took the lead in the 15th minute thanks to a penalty corner from Oksana Ponomarenko. The Belarusians levelled three minutes later when Yuliya Kurhanskaya fired home, leaving things evenly poised ahead of the second half. Belarus scored their winner seven minutes from the end of the contest, with Maryna Nikitsina’s cool finish proving enough to create a moment of history for a team that has performed brilliantly throughout the event in Berlin.

Speaking after the match, Belarus Head Coach Herman Kruis said: “There was a lot of disappointment yesterday evening (after the defeat to Germany), so we spent a lot of time working with the team to make them understand how important it was to go for the bronze medal. They worked so hard to recover from the disappointment of losing the semi-final and I am so happy for them that they achieved a bronze medal in the Indoor World Cup. I’m really proud of the team and we have made big steps forward at this event.”

The awards for the Best Player, Rising Player and Best Goalkeeper will be confirmed in the press release that will be issued following the conclusion of the men’s final in Berlin.