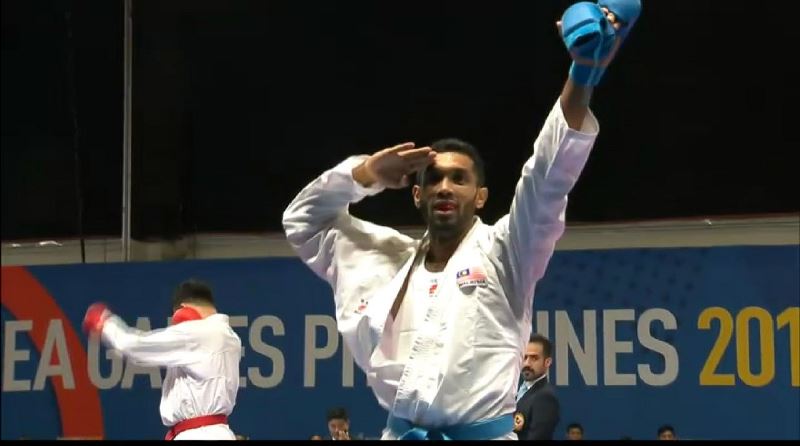 It was a fruitful day for Malaysia in karate at the World Trade Center in Manila – winning golds in the men’s Under-75kg (sparring) and the men’s kata team on Monday.

R. Shamendran destroyed his Thai opponent Muntaen Songvut with a 3-0 score in the men’sUnder-75kg Kumite – for a remarkable comeback in Manila after a serious right knee injury that needed surgery.
But he was not to be undone by the injury. Instead, he worked hard under his coaches Andris Sasiljevs and S. Mahendran and even went to Latvia and Thailand for his “rehabilitation” training. He displayed the fruits of his determination with an aggressive display in the final.
“I was down and out when I picked up the knee injury and it affected me physically and mentally. But I was not going to throw in the towel,” said Shamendran, a former world champion.
Mahendran described Shamendran’s “fighting spirit as second to none”.
Malaysia also struck gold in the men’s kata team to retain the title with an impressive display to earn 25.30 points against Indonesia who came out first and collected 23.98 points.
The Malaysian trio was made up of Emmanuel Leong, Hoe Thomson, and Ivan Oh who won the judges with five minutes of their two-year training.
“We had only five minutes to show what we trained and learned in two years. It was left to us to deliver,” said Emmanuel Leong on the team’s gold medal-winning performance. – BY RIZAL ABDULLAH