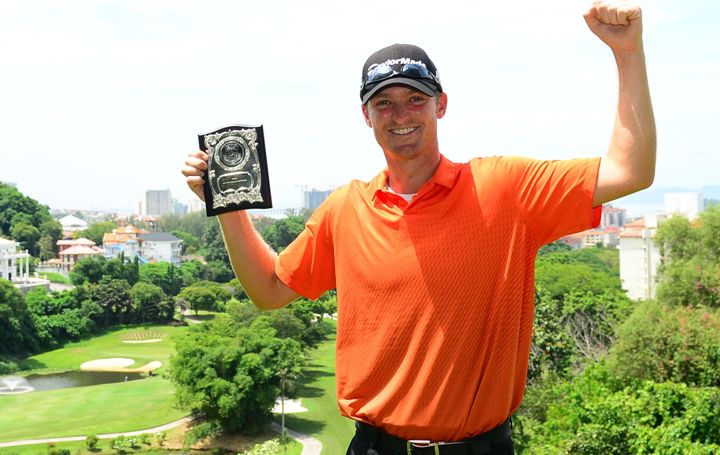 Sherwood, who started the day two shots back, fired a superb 10-under-par 62 highlighted by 10 birdies for a winning total of 22-under-par 266 at the Penang Golf Club.

His playing partner, Pavit, matched his efforts of a 62 but was not enough to pip him to the title for his record sixth ADT victory as he settled for second place at the RM200,000 (approximately US$46,600) event.

The duo would have bettered the course record, achieved by American John Michael O’Toole in his opening round of 64, if not for the preferred lies in play.

O’Toole closed with a 67 to settle for third place on 270 while Sweden’s Oscar Zetterwall finished two shots back in fourth following a 66.

Local star Danny Chia returned with a 65 to emerge as the highest-placed Malaysian in fifth place on 274 alongside overnight co-leader Adam Blyth of Australia, who carded a 72.

Playing in his first year on the ADT, Sherwood was delighted to secure his breakthrough victory after being away from home for close to six months.

He took home the winner’s prize purse of US$8,499 and received six Official World Golf Ranking (OWGR) points while the other top six players and ties earned points based on a sliding scale.

“This win means the world to me. I haven’t been home in six months and my main goal all these while was just to win. I can’t wait to go home now and have a good rest before coming back in two weeks for the next tournament,” said the 25-year-old American, who turned professional in 2013.

“Everything was pretty good for me. I played as best as I would. The putter was on fire and I was able to hit it close. The best birdie today is the 10-footer I made on 17. I was feeling the nerves as Pavit was on my back. That birdie gave me a good two-shot cushion heading into the last,” added Sherwood.

Pavit took pride with his battling performance where he returned with his career-best 18-hole score to strengthen his position atop the current Order of Merit.

“Everything was good for me today. I have no complains. Nick played his best golf too. I am happy with how I played this week. It was good to get some rest last week.

“I thought I had a chance to try for another win but Nick just kept making birdies. I can’t do much about that. We were both making birdies,” said the 27-year-old Thai, who had won the Order of Merit previously in 2014.