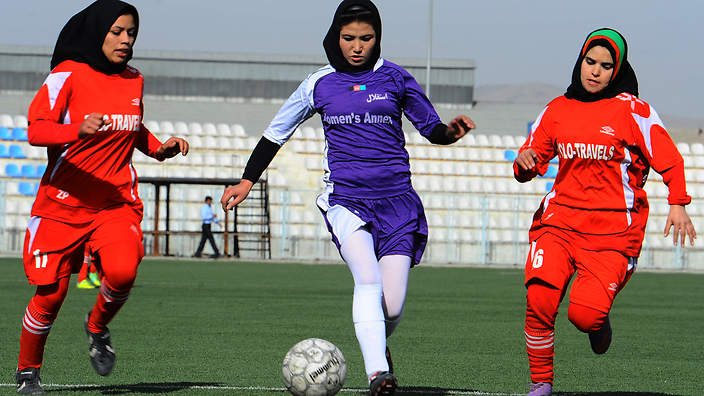 The final scoreline read Kabul 5 – Herat 1, but for the players and noisy supporters who cheered them on Friday, women’s football was the biggest winner at the climax of Afghanistan’s first female sport’s league.

Empty stands at Kabul’s 6,000 seat all-weather stadium failed to diminish the enthusiasm of the hundred or so spectators urging on their teams, in a country where women were rarely allowed to leave their homes under the Taliban’s oppressive rule.

The groundbreaking women’s four-team league was held in parallel with the Afghan Premier League (APL), a competitive and well-established men’s event now in its third year.

“I came here to support my team because football is not only for men,” said Waheeda Bahrami, 17, a high-school student in Kabul, wearing the yellow replica shirt of her team and waving pictures of the players.

“Backing the girls is so important for us. Football is good for health and we need to show girl power.”

“Kabul! Kabul!” chanted the supporters in the stands, almost all young women.

Players meanwhile wore black head-scarves and full leggings to adhere to the country’s conservative Muslim culture in the trophy clash between the home side and western Herat.

Even 13 years after the fall of the Taliban, gender segregation remains sharp in Afghan life, with women in cities and rural areas often wearing the all-encompassing burqa when they venture out of the house.

“I feel sad. Most of the families don’t allow women to come watch football,” said Najeela Bayat, 35, who attended the game with her husband and 10-year-old son.

“We had problems at the gate. They wouldn’t allow my husband to come in. They told me only I could go in. But we insisted.”

On the pitch, the star player was Madina Azizi, 19, agricultural student and striker for Kabul, who scored four goals.

“My family never told me not to play, they encouraged me. Here in Afghanistan there is war, suicide attacks, everything. When I play football I forget everything,” she said.

“I think the future for women’s football here is bright, if we work hard.” – Agence France-Presse