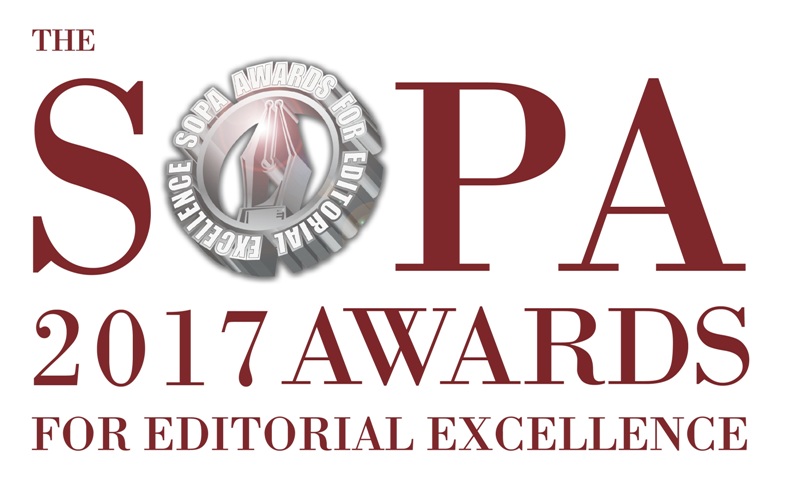 The Society of Publishers in Asia(SOPA), a Hong Kong-based not-for-profit organization dedicated to pursuing excellence in journalism, today announced the call for entries for its “SOPA 2017 Awards for Editorial Excellence,” which will include several new award categories.

The annual awards, established in 1999, represent a world-class benchmark to recognize the best practices in journalism in Asia Pacific, while driving journalistic innovation across international, regional and local media platforms in the region. Now open for entries, the deadline for submissions is 3pm on February 15, 2017.

The awards include two new categories to better represent the region’s evolving media landscape. They are Excellence in Journalistic Innovation and Excellence in Video Reporting, which aim to honor the highest standards in the use of digital tools to deliver more engaging news and short-form video reports. The previous categories of news and feature photography will now be combined into one category of Excellence in Photography.

For the 2017 Awards, media will compete in 17 categories (full list below) including Journalist of the Year, Excellence in Business Reporting and Excellence in Feature Writing. SOPA encourages entries from both large and small publications with entries classified by circulation and language type — English or Chinese. The 2016 Awards attracted more than 700 submissions, a record number.

“The SOPA Awards provide the best forum to honor the greatest reporting, writing and design in publishing in Asia Pacific,” said Ms. S.K. Witcher, Deputy Asia Editor of The New York Times and Chair of the SOPA Editorial Committee. “By recognizing the best practices, we hope to inspire journalists to keep pursuing excellence in their profession, delivering the information that matters, bringing crucial social issues to notice and further guarding freedom of press.”

Commenting on the new awards, Ms. Witcher said: “Most readers now get their news via smartphones or other mobile devices, and media organisations have duly responded by launching digital apps and multimedia online channels. The two new categories recognize these efforts to reach audiences and enrich the reading experience.”

The judging panel for the awards comprises more than 100 media professionals from some of the region’s most influential media, along with academics from a number of Asia’s leading journalism schools. The Journalism & Media Studies Centre of the University of Hong Kong is the Awards Administrator for the 7th consecutive year.

For the purposes of the awards, Asia Pacific is defined to include Afghanistan and the Central Asia republics, the Indian subcontinent, North and East Asia, Southeast Asia and Australia, New Zealand and the South Pacific Islands.

Invest Hong Kong is Platinum Sponsor for the 2017 SOPA Awards. Gold sponsors are Google and Facebook.

1.    Excellence in Reporting on Women’s Issues

13.  Excellence in Reporting on the Environment

17.  Journalist of the Year