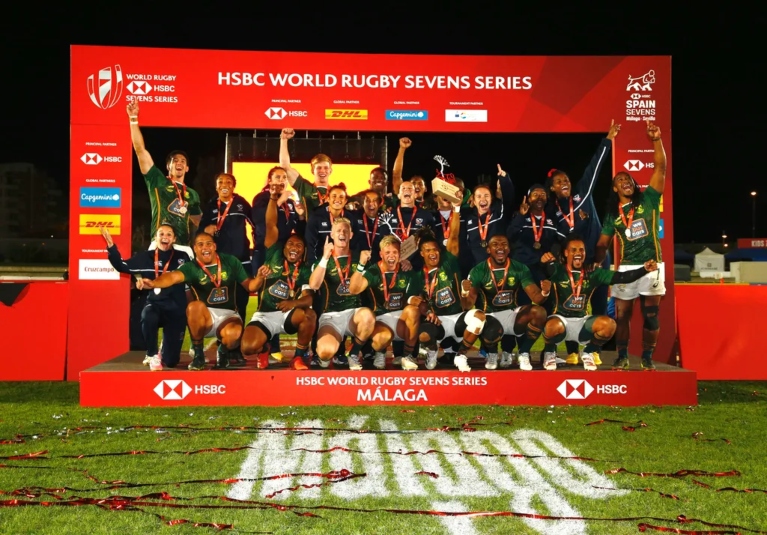 The inaugural HSBC Spain Sevens provided a weekend to remember in Málaga as South Africa needed a late try to come out on top in an engrossing men’s final and USA clinched their first Series title since 2019.

South Africa pipped Argentina to the gold medal thanks to the efforts of player of the final Selvyn Davids, who surged over the try line after the buzzer to clinch a thrilling 24-17 win.

The Blitzboks have now won all three Series events this season, and five tournaments in a row, while their victory over the battling Pumas marked the third best winning streak of all time with a 29th straight victory.

It was Selvyn Davids who burst through the Argentina defence to win it for South Africa, evading a desperate tackle from World Rugby Player of the Year Marcos Moneta to get over the line and spark joyous celebrations.

“We knew it was going to be tough here. We gave it our all, stuck to our instructions and played as ourselves,” said Davids.

In the women’s tournament, USA clinched gold by beating an impressive Russia side, who made it to the final despite their squad being reduced to just nine players.

The Russians had earlier produced the shock of the weekend by beating Series leaders Australia in the semi-final, ending their 15-match winning streak.

The gold medal performance was a big improvement for the Women’s Eagles, who finished fifth and seventh in the two previous rounds in Dubai.

Ilona Maher who was one of the USA try scorers in the final said: “I’m so proud of this group, Dubai wasn’t how we wanted to end. We worked so hard, we did exactly what we planned. We have some new people, some returners, and we’ve been working on our culture.”

Reeling from their shock semi-final defeat, Australia bounced back in the bronze final with a commanding 33-7 win over a French side who finished third in the first two Series events of the season in Dubai.

Meanwhile England made their mark on their return to the men’s Series by clinching bronze in style, fighting back from ten points and two players down to record a spirited 24-20 victory over Australia.

In the men’s tournament hosts Spain took ninth place by defeating Wales 34-5, while France finished fifth with a 28-12 win over USA.

Jamaica suffered a heartbreaking golden point defeat to Japan in the 13th place playoff, as they conceded a try at the death when on the verge of their first ever Series win, before losing in extra time 29-24.

In the women’s event Canada and Ireland met in the fifth-place playoff after beating Poland and England respectively, and the impressive Irish came out on top 26-5 to claim valuable Series points.

Invitational side Poland’s inspiring run ended with a 22-10 defeat to England in the seventh-place playoff, while hosts Spain clinched ninth by beating Belgium 17-5 and Brazil took 11th, with Fiji unable to travel to Málaga.

The results from Malaga see South Africa dominating the men’s Series standings after three rounds with a maximum 66 points, followed by Argentina with 53 points from three consecutive podium finishes and Australia in third on 47 points.

Australia maintain their position on top of the women’s Series standings at the halfway stage with 56 points from the opening three rounds, followed by France and Russia who are tied on 46 points with Malaga title winners the USA in fourth on 40 points.

The teams now move across Spain to Seville for the fourth round of the Series next weekend where invitational team Portugal will replace Fiji in the women’s event to complete a full 12 team line-up.

The pool allocation based on the finishing positions in Malaga sees the USA face Canada, England and Portugal in Pool A. Beaten finalists Russia are in Pool B along with Ireland, Poland and Brazil.

Series leaders Australia find themselves in Pool C where they will take on Olympic silver medallists France, hosts Spain and invitational team Belgium.

The same 15 men’s teams will take to the field in Seville as Fiji and Samoa are confirmed as unable to participate in Spain while Germany and Jamaica continue as invitational teams.

The pool draw for Malaga sees all-conquering South Africa in Pool A alongside the USA and hosts Spain in a three team pool which includes a bye.

Pool B involves Argentina, silver medallists in Malaga, who will take on Ireland, Germany and Jamaica.

In Pool C the young English squad that claimed bronze in Malaga will face France, Wales and Japan.