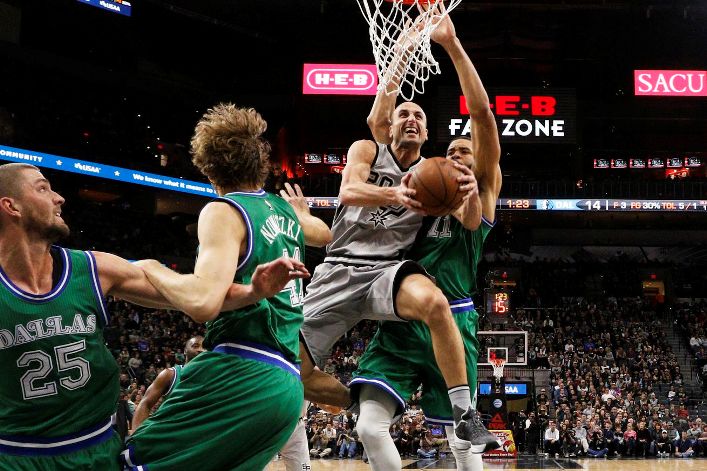 The San Antonio Spurs are streaking into the second half of the NBA season after notching their 11th straight victory on Sunday, 112-83 over the Dallas Mavericks.

Forward LaMarcus Aldridge scored 23 points, 13 of them in the pivotal third quarter, as the Spurs thrashed their cross-state rivals to remain unbeaten in 24 home games this season.

It was their 33rd straight home victory in a streak dating back to last season and took their record to 36-6, equaling their best start to a campaign, previously achieved in 2010-11.

The Spurs have earned 11 of their 36 victories by a margin of at least 25 points, a new club record.

Fresh off a victory over Eastern Conference powerhouse Cleveland, the Spurs fought through their worst first quarter of the season on Sunday.

But they turned things around with the aid of suffocating defense, holding the Mavericks to their lowest field-goal percentage of the season at 35.8 percent. Mavericks big man Dirk Nowitzki was limited to just four points.

“Both LA (Aldridge) and Boris (Diaw) were great in the pick-and-roll defense getting back to Dirk,” Spurs coach Gregg Popovich said. “Obviously, he’s a tough cover, so both of them deserve a lot of credit.”

“I have to get Dirk better looks — we have to run some things to put him into better positions,” Carlisle said.

The Spurs trailed by two points after the first quarter, but out-scored the Mavs 64-40 in the second and third periods to gain control.

But Boris Diaw contributed 16 points for San Antonio and Kawhi Leonard chipped in 15 while sitting out the fourth quarter and reserve guard Jonathon Simmons stepped up with 14 points for the Spurs.

A frustrated Carlisle was ejected from the game with 11:17 to play in the fourth quarter after coming far onto the court and gesturing at one of the officials. By that time, the Spurs were leading by 23 points.

“There was a level of frustration tonight but everyone was trying to do the right thing,” Carlisle said. “San Antonio goes hard and they can make you look bad. We got beat and that’s the name of that tune.”

Russell Westbrook notched his second straight triple-double — and fifth of the season — as his Oklahoma City Thunder cooled off the Miami Heat 99-74.

Westbrook scored 13 points with 15 assists and 10 rebounds to back up Kevin Durant’s 24-point, 10-rebound night.

Durant said the Thunder are doing the things they must do if they are to challenge the Warriors and Spurs in the West.

“I think we are doing a good job of moving the ball,” Durant said. “Our defense has picked back up. We are doing a great job of covering up for each other on the defensive end and we’re rebounding the ball.

“We have to continue to do that in order for us to win going forward.”

However, he ended up leading Miami in scoring with 22 points.

In Los Angeles, Kobe Bryant had a quiet scoring night with just five points in his Lakers’ 112-95 blowout loss to the Houston Rockets.

But he passed Lakers great Jerry West’s career mark of 6,238 assists in the first quarter for second on the team’s all-time list.

Bryant finished with nine assists to take his career tally to 6,244. Earvin “Magic” Johnson is the Lakers all-time assists leader with 10,141. – Agence France-Presse