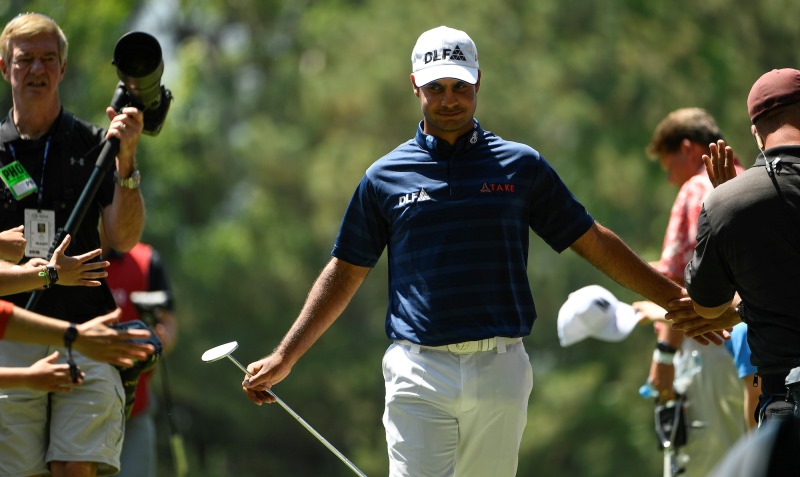 Indian hotshot Shubhankar Sharma extended his advantage at the top of the Asian Tour Habitat for Humanity Standings after capping a commendable tied-seventh place finish at the US$1.75 million Hero Indian Open on Sunday.

The 21-year-old Sharma, who propelled into stardom with two victories over the last three months, had set a new course record at the DLF Golf and Country Club with a second round eight-under-par 64 before going on to cap his best result ever in his National Open.

He closed with a three-over-par 75 and a four-under-par 284 total to finish seven shots shy of making the play-off which saw Matt Wallace of England defeating countryman Andrew Johnston on the first extra hole to emerge victorious.

The young Indian talent had returned home in glory at the start of the week, having notched a tied-ninth place finish in his World Golf Championships debut at the WGC-Mexico Championship the week before, where he led by two shots in the second and third round.

Sharma continued to hog the headlines when he received a coveted invite to The 2018 Masters Tournament on Tuesday, thanks to his recent exploits. He had earlier earned a berth at The Open in July following his breakthrough win at the 2017 Joburg Open, which was part of The Open Qualifying Series.

“I am disappointed but these things happen and it is not an easy course. Even though I started well, I made a few bad swings but, in the end, it was alright. I really enjoyed the tournament and I loved the support. I would like to thank everyone for coming out to support me.

“I am happy about the way I have been playing and that I am able to get myself into contention every week. I put in a lot of hard work, and I am happy with the way things have been. Disappointments are part of the game. It will just make me stronger. The next time I’m in this situation, I’ll do better,” said Sharma, who had held a share of the overnight one-shot lead heading into the final round.

Sharma moved up two rungs to a career-high 64th place on the Official World Golf Ranking (OWGR) following his solid result at the Hero Indian Open, maintaining his status as the leading Indian player in the world.

By breaking into top-64 on the OWGR as of the cut-off date on March 12, Sharma earned his second WGC appearance at the 2018 WGC-Dell Technologies Match Play tournament, which will get underway at the Austin Country Club in Texas from March 21 to 25.

“I’m looking forward to playing the 2018 WGC-Dell Technologies Match Play tournament. It’ll be a good break from stroke play. The last time I won a match play event was six years ago at the All-Indian Amateur,” added Sharma.

Sihwan Kim of the United States made a huge leap from 50th to sixth position on the Habitat for Humanity Standings after recording his career-best result on the Asian Tour with a third-place finish in India.

“It was a difficult course and I didn’t expect the leaders to shoot so low. I had a number in mind this morning, and I achieved what I thought. I thought I had a pretty good chance to win, but with scores that low, that wasn’t the case.

“This result will get my confidence up, especially when playing on difficult golf courses. If I continue to play like this, then I’ll be fine. The conditions have been great and the people have been nice,” said the 29-year-old Kim, who came through the Qualifying School in 2017.

Reigning Asian Tour’s number one Gavin Green of Malaysia hopes to take the positives from his India outing where he finished tied-16th after closing with a 71. He moved to 16th place on the latest Merit rankings.

“It was an average week and I wished I had played better. I love India and I will want to come back next year. I’ve made changes to my game and it’s working out so far. I struck the ball a lot better last week and my short game got a little stronger. I just have to work on my drives, hopefully before my next event.

“I’ll be taking a nice break, then probably head over to Morocco and Spain. But for now, I’m going to chill out, have fun and enjoy my break,” said the 24-year-old Green, who became the first Malaysian to lift the Asian Tour Merit crown in 2017.

Sharma sits atop the Asian Tour Habitat for Humanity Standings with a current haul of US$548,125 while Thai star Kiradech Aphibarnrat, who claimed his third Asian Development Tour title in Brunei last week, occupies second place with US$251,173.

Paul Peterson, Daniel Nisbet and Berry Henson remained in third, fourth and fifth positions respectively on the Merit rankings following the conclusion of the Hero Indian Open, which is co-sanctioned by both the Asian Tour and the European Tour.