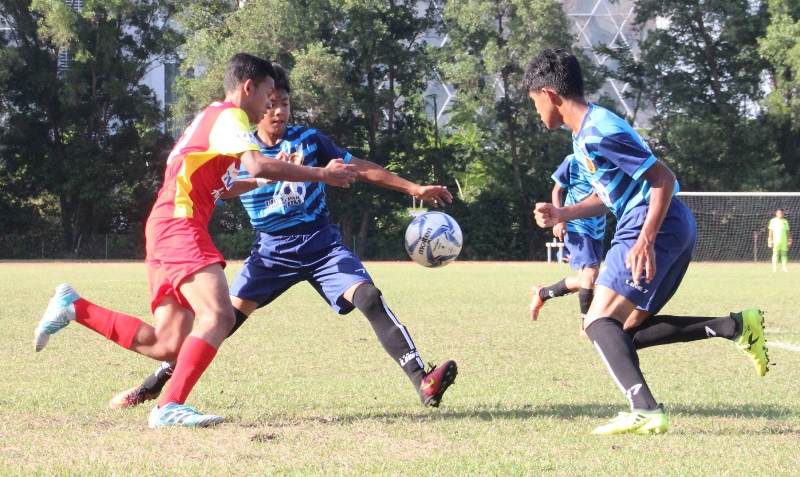 SMK Seksyen 11 of Selangor scored a thumping 3-0 win over newcomer SMK Ibrahim Fikri of MSN Terengganu to pick up their first three points of the new Ministry of Education Under-17 League 2018 (Liga KPM) that was held over the weekend at the SMK USJ 23 Mini Stadium.

SMK Ibrahim Fikri are newcomers to Liga KPM where alongside SMK Mutiara of Labuan, they will be playing in the premier youth football league in the country for the first time ever.

But the match was always going to be tough for SMK Ibrahim Fikri considering that they are using U15 players in a league for the U17.

And considering that it was their first game of the season, SMK Ibrahim Fikri did well to fend off their more experienced opponents and only conceded the goals in the second half of a largely exhilarating tie.

Muhammad Fakrul Iman Naszari snatched two quick goals in the 42nd and 52nd minute as Muhammad Husni Idrus grabbed the third for the home team late in the 76th minute.

“We knew that it will be tough but I believe that the team will progress as the season progresses,” said SMK Ibrahim Fikri coach Zainuddin Md Zai afterwards.

In the meantime, both U15 teams of the Gambang Sports School (SSMP) chalked up identical win over their respective opponents.

SSMP A edged SMK Seri Titiwangsa of Kuala Lumpur 1-0 off a lone strike from Syahmi Adib Haikal Mohd Shukri in the 80th minute as SSMP B overcame SMK Putera of Kelantan by the same scoreline.

The only goal of the game came in the 29th minute off Muhammad Farhan Rahim.

In the other matches, SMK Presint 14 (1), which is the academy for Felda, beat the visiting SMK Za’ba side of Negeri Sembilan 2-1.

The visitors had taken the lead through Muhamad Aiman Ahmad Nizam early in the second minute before SMK Presint 14(1)  replied with two quick goals from Muhammad Zairol Arief Abdullah in the seventh minute and Muhammad Wazif Nazarail (16th).

Elsewhere, SMK Syed Hassan of Perlis was held to a scoreless draw by SMK Tabuan Jaya of Sarawak as SMK Gunung Rapat of Perak beat SMK Seberan Temerloh of Pahang 1-0.

Muhammad Ikfan Mohd Rozi scored the only goal of the game early in the 15th minute to give SMK Gunung Rapat the full points.