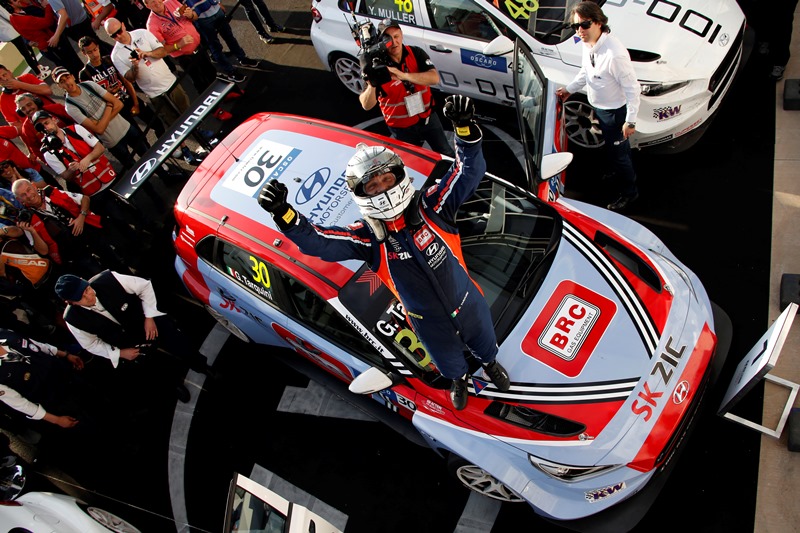 In 2009, aged 47, Gabriele Tarquini succeeded the legendary Juan Manuel Fangio as the oldest FIA world champion. In 2018, in his 57th year, he won the inaugural WTCR − FIA World Touring Car Cup to prove his “love never ended” for a sport that had fired a passion in him from almost the very start.

But Tarquini’s career should not be defined by its longevity. Instead, as the Italian reminds Martin Haven in the latest episode of the WTCR Fast Talk podcast series presented by Goodyear, he’s been a contender in whatever he’s raced and wherever he’s raced it.

He’s enjoyed success in karting − where he was a rival to Ayrton Senna − in Formula 3 and Formula 3000. He made 38 starts in Formula One and scored a world championship point. He’s raced at Le Mans and has a British, European and World Touring Car Championship title to his name. He’s also been on the books of several touring car manufacturers, eager to tap into his experience and technical knowhow. Indeed, he was Hyundai’s first choice as development driver when it started out on the road to the WTCR greatness in 2017 with its i30 N TCR.

Although he’ll be 58 when the delayed WTCR season gets underway, Cinghio (wild pig) has targeted more wins and another FIA world title challenge as he continues his partnership with Norbert Michelisz at BRC Hyundai N LUKOIL Squadra Corse. The “fire” that started as a boy still burns.

“When I was a baby my father was running a fuel station and beside the fuel station where was a small go-kart track,” Tarquini explains on WTCR Fast Talk presented by Goodyear. “When I was five or six, I start playing with these small karts. The fire start, it was a passion. I loved these small machines and the love never ended. It’s still there.”

But it could have been a different story had he gone through with a decision he’d made prior to the WTCC finale at Macau in 2009, where he would beat Yvan Muller, his then factory SEAT team-mate, to the big prize.

“I spoke to my family just before leaving for Macau that probably, if I win the title, I will stop racing because it’s the best moment and I have no [drive] for next season,” Tarquini recalls. “It’s the world title I tried to catch for a long time and I cannot ask any more from my racing career. After the tough race with the big accidents, being in hospital with the car completely broken, I won the title. Okay, I didn’t have a seat for the next year because it was the last race of the SEAT manufacturer team, but I was still competitive, still enjoying racing, I made a fantastic season and I didn’t want to stop. It was my life and, in the press [conference], I didn’t mention about this idea to stop.”

Gabriele Tarquini’s WTCR Fast Talk podcast presented by Goodyear, the WTCR’s official tyre supplier, and hosted by Martin Haven is available in two parts at FIAWTCR.com and other outlets from 12h00 CET today (20 May) with part two from 12h00 CET on 22 May. Click here to listen or follow this link: https://www.fiawtcr.com/wtcr-fast-talk/