Home 2023 Team Audi Sport with good individual results and setbacks at the Dakar... 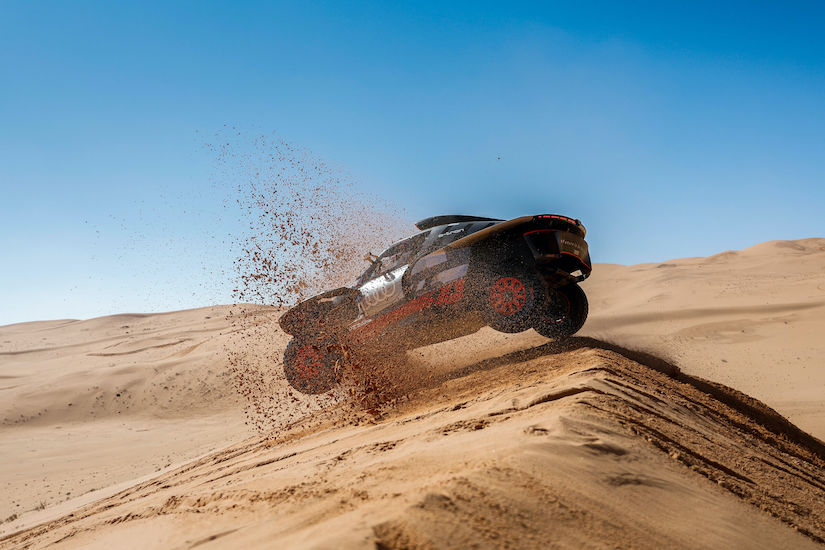 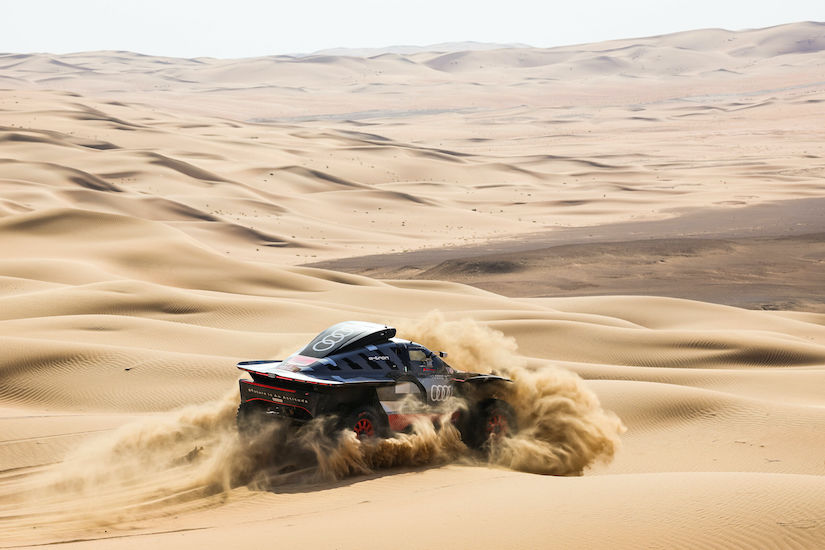 The effort paid off: Team Audi Sport shaped the 2023 Dakar Rally with innovation and performance right up to the end despite various setbacks. The Audi RS Q e-tron with its electric drive concept scored a total of 14 podium results on 15 event days including the prologue.

In addition, the Audi drivers led the rally in Saudi Arabia with the prototype for three days for the first time. However, a series of punctures, the accident-related retirements of Carlos Sainz/Lucas Cruz and Stéphane Peterhansel/Edouard Boulanger as well as a massive loss of time for Mattias Ekström/Emil Bergkvist prevented a better result than 14th place.

Oliver Hoffmann, Board Member for Technical Development at Audi, visited the motorsport team on the final weekend in Saudi Arabia and recognized many achievements: “The pace of our innovative Audi RS Q e-tron was good right from the start and also showed at the end. Unfortunately, we also had bad luck in the desert and many punctures. Despite the setbacks, the team celebrated a finish thanks to strong performances. We will now analyze all areas. A podium was our goal. It remains so, because we will definitely compete again in 2024.”

After the second outing at the Dakar Rally Rolf Michl, Head of Motorsport at Audi, also drew a mixed conclusion: “We experienced all the highs and lows at this edition of the Dakar Rally. The top results in the daily classifications show that we are among the fastest with our innovative RS Q e-tron. And with a car that produces the lowest emissions. However, from tire and chassis damage when encountering obstacles on the rough tracks to the accidents, we have also experienced many disappointments. Now we are thoroughly working through all aspects.”

This makes the motivation and performance of Team Audi Sport in the bivouac, but also by the race truck team on the stages, all the more remarkable. “On 15 event days, the team gave everything during the evening service. The same goes for Michael Baumann, Philipp Beier and Audi Sport engineer Sebastian Lindner in the Race Truck,” says Uwe Breuling, Head of Vehicle Operations. “The joint strong effort by Q Motorsport and by our employees paid off. Without them, the good individual results and the finish would have been unthinkable.”

Mattias Ekström/Emil Bergkvist led the world’s toughest desert rally after the prologue, their teammates Carlos Sainz/Lucas Cruz on the two following days. However, a series of 14 punctures on the first four desert stages, spread across all three driver teams, cost Audi valuable time.

Further setbacks followed when Carlos Sainz damaged his suspension in the scree of the third stage and in an accident on the sixth stage. Similarly, a stone invisible in the desert dust destroyed a suspension on Mattias Ekström’s car on the seventh stage.

The 14-time Dakar winner Stéphane Peterhansel was no longer in the race at this point. After jumping off a dune, his car landed so hard that co-driver Edouard Boulanger was taken to hospital with back pain. The diagnosed vertebral injury was subsequently treated by specialists in Germany.

“Three stage results in the top three showed what was possible,” says Stéphane Peterhansel. “However, I have no memory of my accident, which dashed all hopes.” The day before their retirement, the French driver pairing was still in a promising position in second place overall. With Carlos Sainz/Lucas Cruz, a second Audi driver duo followed just behind in fourth place. “But then it seemed that nothing was going in our favor this year,” Carlos Sainz summed up.

“The entire team was well prepared but two accidents prevented our finish. That’s how motorsport can be sometimes, unfortunately.” Five times the Spaniard and his co-driver Lucas Cruz finished among the top three in the stage results until their retirement.

All hopes therefore rested on Mattias Ekström/Emil Bergkvist. The Swedes, who are contesting only their third Dakar Rally, once again mastered the demanding competition with more than 4,200 special stage kilometers and almost 8,900 kilometers in total as the best Audi team.

“It was a tough rally: we never gave up even after the high-time losses,” said two-time DTM Champion and World Rallycross Champion Ekström. “When we didn’t have confidence in the roadbook on individual days, we took some speed out, otherwise we measured ourselves against the front runners.”

With great success: from the ninth stage onwards, the Scandinavians were among the top four six times in a row. In the demanding sand dunes in the Empty Quarter, Ekström/Bergkvist even achieved the third and second place of the day on the marathon stage without evening service on January 12 and 13.

In total, they were among the top three in the stage rankings six times during the 2023 Dakar Rally. Almost seven hours behind after repairs to their own car, but also their help for their teammate Sainz, meant 14th place overall in the end.

“In some respects, the Dakar Rally has returned to its roots this year,” analyzed Sven Quandt, team principal of Q Motorsport, who looks back on some three decades of experience as a former driver and team owner.

“The relentless pace, the setbacks for a number of top drivers, correspondingly large shifts in the standings, the length of many stages, and the challenging terrain are all reminders of the past. I’m happy that we as a team with Audi managed this competition and made it possible to reach the finish. For Mattias and Emil, this discipline is still relatively new. Hats off to their performances.”