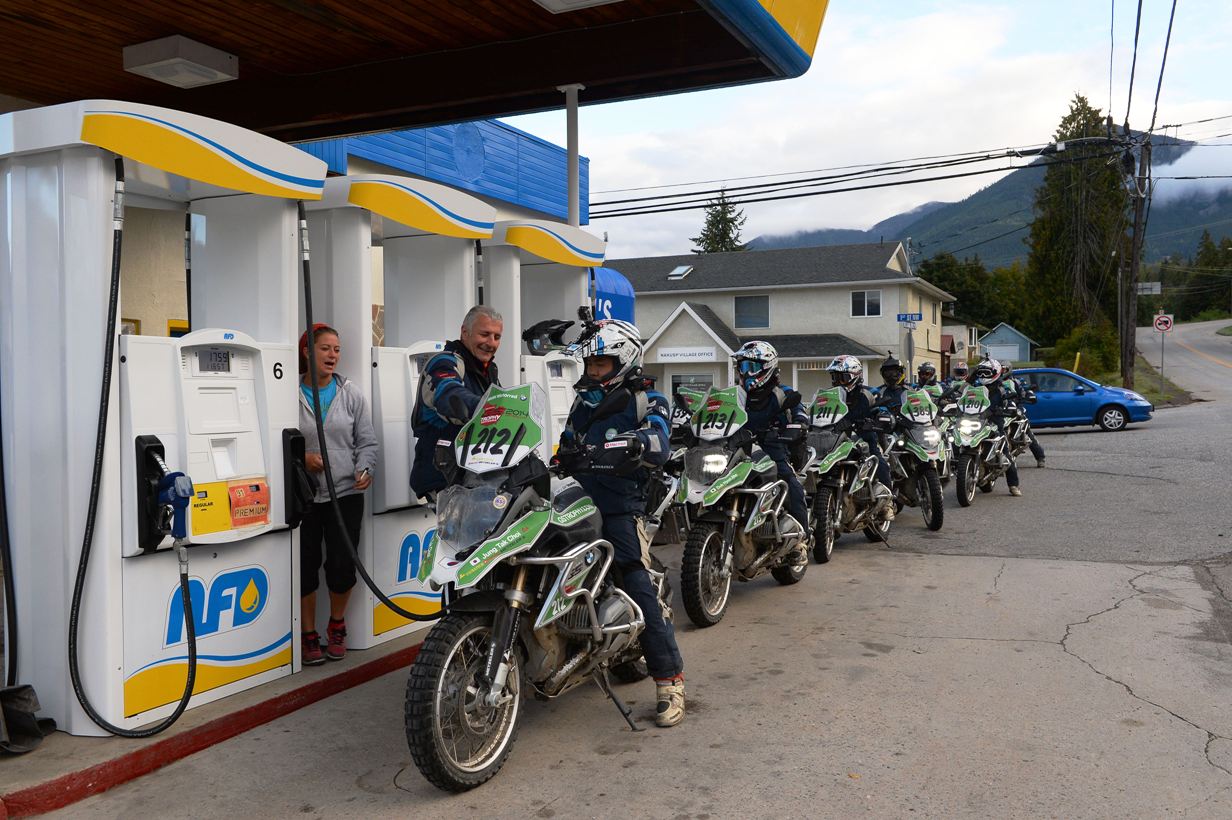 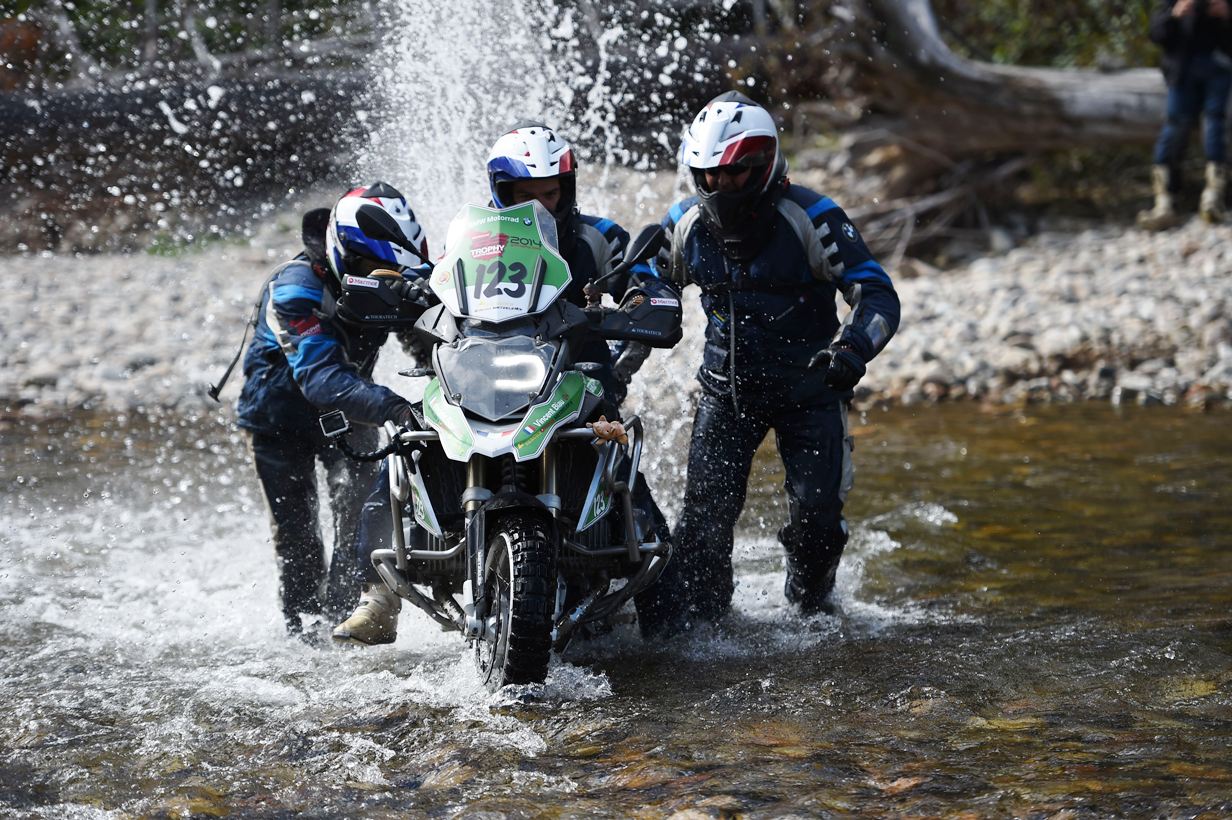 A worldwide mix of talented GS riders got the best possible taste of the rugged beauty of Canada today as day three of the GS Trophy consisted of nearly 200 kilometres of off-road adventure, 150 kilometres of scenic paved mountain passes and three special stages thrown in for good measure – two of which involved getting extremely wet.

As usual, the day started early – with a 6am wake-up call – but yesterday’s rain and mud soon became a distant memory as blue skies and warm sunshine greeted the early risers. Today was about getting off the pavement and heading into the middle of nowhere, as a 55-kilometre blast along what many of the riders called the “perfect GS road” led to the first special stage of the day – bike-to-bike towing.

On a sandy, dusty and rocky track, and using just one tie-down strap attached to the footpegs, one team rider had to tow his team-mate’s GS behind him – without the engine running of course – over two kilometres from the starting point to the finish, with an immediate forfeit if they stopped or crashed at any point. The clock only stopped when both bikes had reached the finishing line and the fastest team to make it up the hill would win the day.

Sounds easy? The reality was that only five made it up the hill without any penalty, and the winning team – by over a minute – was France.

Sixty kilometres of fantastic riding followed, that saw one overenthusiastic journalist going into a corner too hot and sliding down a ravine. Needless to say, the amazing spirit already demonstrated in the Trophy saw a multi-national rescue effort that involved straps, ratchets, brute strength and a pick-up truck to haul the GS back up to the track. Both rider and machine were unharmed and continued on their way after a quick medical check and a series of ‘high-fives’ with fellow participants. 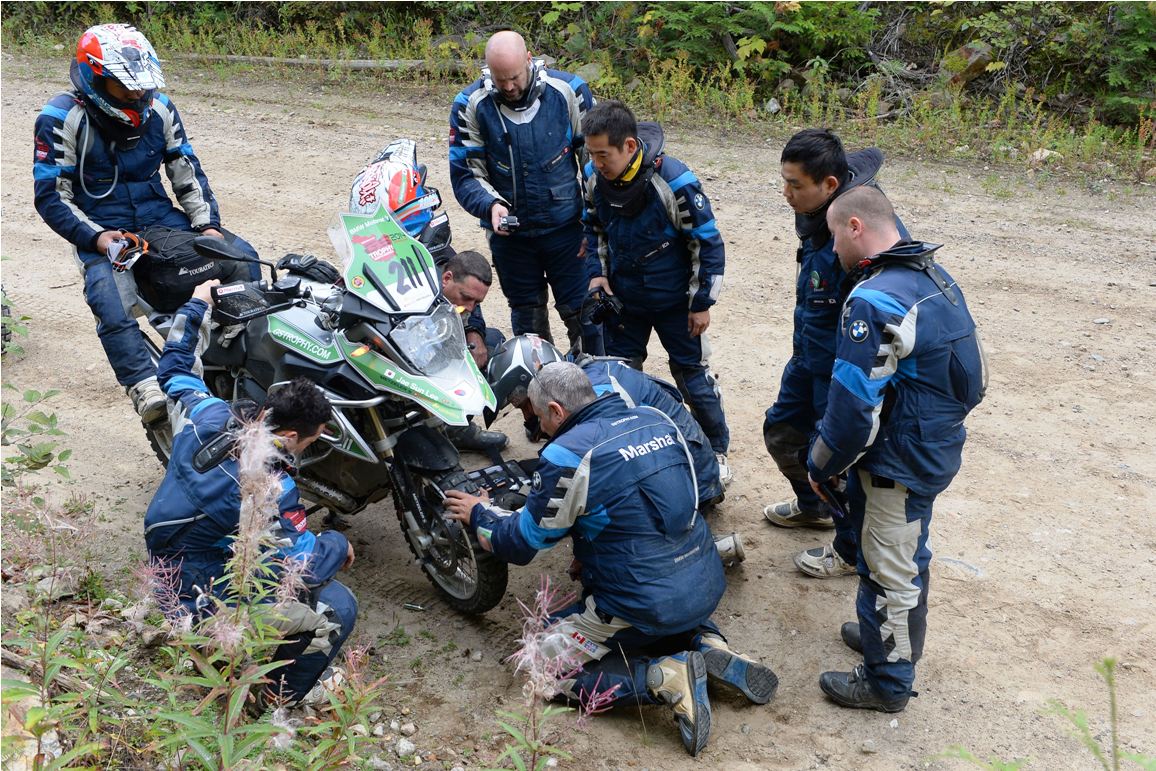 Soon after, the teams arrived at a picturesque river crossing for the ‘Water Bear’ special, which involved the highest levels of teamwork, physical effort and riding skill to get one of their GS bikes across a fast-flowing river strewn with slippery rocks. With one rider at the controls and the other team members having to maintain contact with the bike at all times, each country had its own ideas about the shallowest route. This provided great entertainment for the fellow competitors as every single participant got soaked in search of the fastest time. The winners of the Water Bear special were Team Alps.

The final special stage was another 185 kilometres away – 115 km of which was seriously challenging off-road trail. This culminated in a 20 km section graded as a ‘black run’ where the competitors found the trail through the forest narrowed to barely handlebar width, while steep climbs loaded with loose rocks brought consternation for some and delight for others. Finally the trails wound down to the shores of picturesque Christina Lake, allegedly the warmest in Canada. The ‘Paddleboard Challenge’ saw teams racing from the shoreside into the lake, mounting their boards and paddling around a fixed buoy – and then back to the shore again. This special test was no easy task, coming straight after several hundred kilometres of tough riding, but it was Team CEEU who won the battle for supremacy on the waves.

Overall winners for the day were Team South Africa, having placed 4-4-2 in the three special tests. Ruan de Lange: “We’re really happy to have won today. Our team journalist Stefan Boshoff was at the GS Trophy in 2010 and he explained the most successful strategy in this event is to aim for consistency across all the challenges. This really paid off today and has brought us much closer to Team CEEU. Now we just have to keep on doing this over the next four days!”

The toughest day yet ended with live music and dinner at the Christina Lake community hall where the local community were incredibly welcoming, feeding and entertaining the GS Trophy competitors. Tomorrow will bring a whole new series of specials and ‘local’ challenges – some of them performed in front of large crowds. All will be revealed right here on gstrophy.com tomorrow evening.