Home 2022 The Championship is “heating up”: MotoGP™ returns to Europe 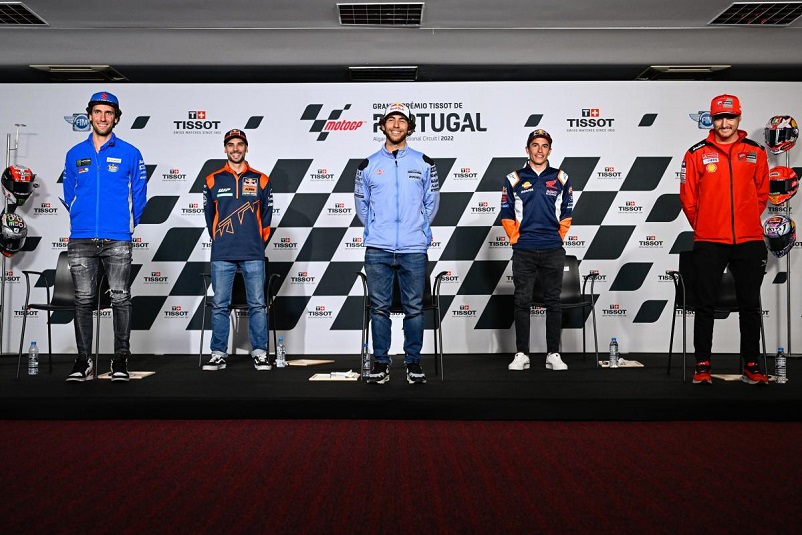 Ahead of the Portuguese GP, catch up on what the riders had to say ahead of the weekend’s action at the Portimao rollercoaster

The Tissot Grand Prix of Portugal kicks off the European stage of the 2022 MotoGP™ World Championship at the Algarve International Circuit this weekend, with it set to be a bumper weekend in Portimao. Before the track action on Friday, Championship leader and The Americas GP winner Enea Bastianini (Gresini Racing MotoGP™) was joined by Alex Rins (Team Suzuki Ecstar), Jack Miller (Ducati Lenovo Team), Miguel Oliveira (Red Bull KTM Factory racing) and Marc Marquez (Repsol Honda Team) on stage to discuss what lies ahead with the media at the pre-event Press Conference.

After four incident-filled and drama-packed rounds across Asia and the Americas, MotoGP™ is back in Europe. The Algarve International Circuit, affectionately known as the Portimao rollercoaster for its undulating nature and exhilarating racing, is the first port of call for the premier class. For some, a return to familiar ground offers a chance to start fresh and build some momentum in the Championship. It’s particularly true in the case of hometown hero Oliveira, who has had a mixed beginning to the 2022 season.

“The start wasn’t what we wanted because we wanted to be inside the top ten and close to the top five. We come here and being a home GP, we can reset the mind and everything. My motivation is high. We want to find the speed we had in the past and try be competitive here in Portugal again.”

Oliveira leads home fans on a special lap of Portimao

Riding his RC16, the KTM rider warmed up for the Portuguese GP by taking part in the special event on Wednesday evening

The Portuguese star also spoke of the special reception he received on Wednesday, where he led fans around a lap of the Portimao track on his factory RC16.

“I think it was around 700 bikes. Maybe more. Every year there’s something going on, so this year we managed to get KTM involved and bring the MotoGP bike to the street. Every time you take the bike out of its natural environment it’s amazing. A privilege to be involved and to be surrounded by this great support. Let’s hope I can give something back.”

Since debuting on the calendar in 2020, when Oliveira took victory, MotoGP™ has visited Portimao on three occasions. On two of those occasions, Jack Miller has stood on the podium, and the Aussie stated what makes a visit to the south of Portugal so special.

“It’s so different to any other track we got on the calendar that makes it nice you know, we got to negotiate the hill, the elevation you’ve got corners off-camber, on-camber. It throws a bit of everything at you so it’s definitely a refreshing track to ride.”

“We’ve had a pretty good record around here so yeah, hopefully, we can find the speed that we had last time we were here so we will try to find that and build a solid weekend. As the boys said the Championship sort of really starts kicking off here and starts heating up now so hopefully we’ll be at the forefront.”

For Marc Marquez, he returns to the scene of his comeback in 2021, after almost a year out from the sport. Having just come back from another injury at COTA a fortnight ago, it’s a chance for him to continue to gel with the revamped RC213V at the rollercoaster.

“It was a nice comeback one year ago here in Portimao after the long injury. It hasn’t been an easy year with ups and downs and some injuries but anyways we are in Portimao to compete. It’s true that inside our box we don’t have a lot of references because I competed only one time and it was half and half.

The last GP here, Alex and Pol were quite fast. We need to understand with this new bike if we can continue the same way we did in Austin, it’s time to reconfirm here in Portimao. The best thing is to approach the weekend without expectation and just try to understand, try to feel the bike and after Warm Up we will understand where we are.”

Sunshine may be at a premium over the course of the next few days if weather reports are to be believed. The chances of a second wet race of the season beckons which may prove problematic for some riders. However, Championship leader Bastiaini feels he can take it in his stride as he can lean on previous data recorded by his factory counterparts.

“The conditions will be strange this weekend. There will be a lot of wind and the possibility of rain. In Indonesia, we made a good step in the race in the wet conditions. Also, Pecco [Bagnaia] was really fast here and I can check his data to see something, but I want to start this weekend from zero and after we will see what happens.”

For Alex Rins, it mightn’t be as straightforward: “The weather could be tricky. Friday and Saturday, we might have rain and wind. We’re in good shape so let’s see where we end up.”

During the Press Conference, the Suzuki man also spoke about his contract situation, with it due to expire at season’s end, and how it has affected his riding this year.

“The good thing and the thing that keeps me calm is that already Livio [Suppo] and the Japanese guys have told me that they want to continue so I’m calm. I can ride in a better way because of that. My manager will start talking in the next races about an extension.”

Key to earning that will be keeping up his recent run of good form, and there’s no better place to start than at the Tissot Grand Prix of Portugal. Wheels are on the ground from 09:00 local time (GMT +1), and you can check out the time schedule in full HERE so you make sure you don’t miss a second of the fun.- www.motogp.com