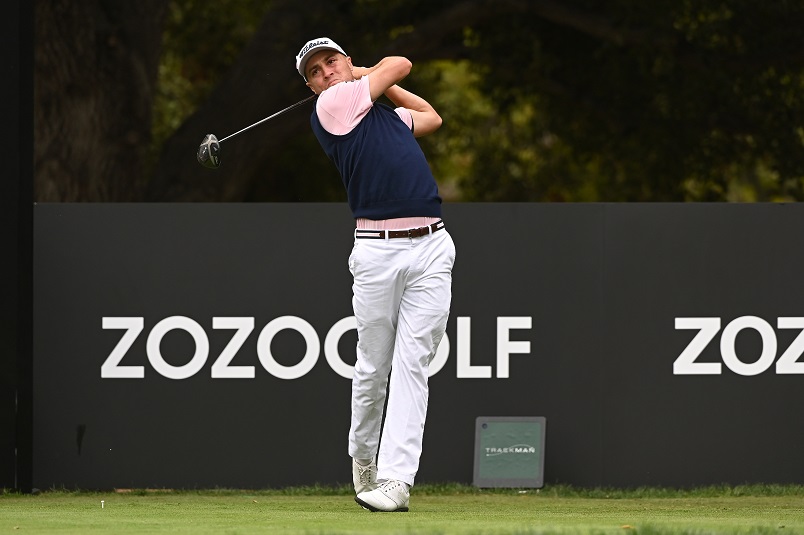 American Justin Thomas birdied two of his closing three holes to retain his overnight one-shot lead over a fast-charging Jon Rahm after the third round of the ZOZO CHAMPIONSHIP @ SHERWOOD on Saturday.

Thomas, a 13-time PGA TOUR winner, battled to a 5-under 67 at Sherwood Country Club, seizing a fortunate break on the par-5 16th hole when an errant drive stayed out of the penalty area which he went on to make birdie from nine feet.  A 28-foot birdie conversion on 17 earned Thomas his 14th career 54-hole lead/co-lead in which he has gone on to win on eight occasions.

World No. 2 Rahm, who won twice in the previous season, produced a flawless 63 which included seven birdies and one eagle while Lanto Griffin carded a 68 for third place, two back, in the US$8 million tournament which moved from its home base in Japan to the U.S. this year due to COVID-19.

Sunday promises to be a thrilling final round shootout with first round leader Sebastian Munoz (66), Ryan Palmer (66) and Patrick Cantlay (68), the only player bogey-free through 54 holes, lying just three back at a venue which has yielded low scores all week. The average scoring through three rounds is 69.04.

Satoshi Kodaira remained as the highest placed Japanese golfer amongst the eight in the elite field, a third round 70 placing him in T20 on 204 while defending champion Tiger Woods shot a 71 to be well back in a share of 68th position.

Thomas, ranked third in the world, was delighted to cling on to his lead on 19-under 197. He leads the field in back-nine scoring average through three rounds (31.00) and is a cumulative 15-under with no bogeys.

“It was a good fight, hung in there well. I felt like I definitely didn’t play as well as I did the first two days or didn’t have my best stuff by any means, but to shoot a round like that is huge,” said the 2017 FedExCup champion.

“Birdieing 16, 17 was great to kind of give myself a little bit of momentum and cap off, you know, what I felt like was a pretty average day. I heard it hit the branches (on 16) and that’s when Bones (on-course commentator Jim MacKay) said it was just in the right first cut. Yeah, I guess we got lucky there. I just was trying to stay patient, understanding that good things were going to happen.”

Rahm, one of the longest drivers in the game, hit all 13 fairways on Saturday – the first time he has achieved this on TOUR – and found 15 greens in regulation where he ranks first for the week. The Spaniard made the most gains with his flat stick, picking 2.8 strokes against the field as he took 25 putts per green in regulation where he also ranks first in the category.

He got off to a flying start on Saturday by making 17-footers for birdie on one, followed by an eagle at the next hole and was six under through seven holes. “I made the putts, which always helps, right?,” said the 25-year-old.

“Making the putt on one and two kind of makes you feel like you don’t have to hit it to tap in to be able to make birdies and it freed me up a little bit. You know, got a really, really good round going early on. The last five and a half rounds, my putter was absolutely cold, didn’t make anything at all. Those putts on 1 and 2 were key to good momentum and got the confidence going.”

Griffin, 32, faces a big test in his chase for a second PGA TOUR title when he goes toe-to-toe with two of the best golfers in the game, Thomas and Rahm. Last October, he broke through at the Houston Open, signalling his career rise which has seen him win on PGA TOUR Latinoamerica and Korn Ferry Tour.

“It’s a completely different field, different golf course. Playing against Jon Rahm and Justin Thomas is different, there’s no way around it, so I’m going to have to play really well tomorrow, I’m aware of that. But it’s fun. This is what I dreamed about, position I dreamed about being in my whole life. From being on mini tours, the Korn Ferry Tour, now to be here playing with the best players in the world in the final group, it’s a lot of fun,” he said.