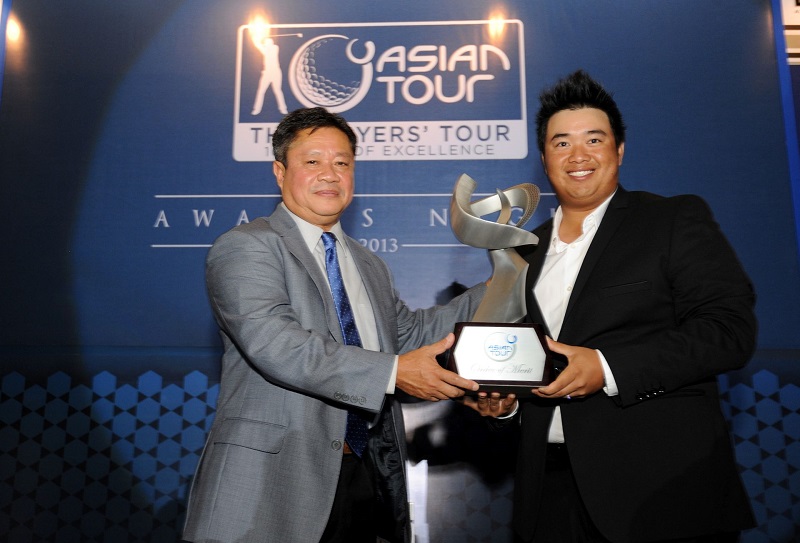 Held in Jakarta for the first time ahead of the CIMB Niaga Indonesian Masters which starts on Thursday, the supremely talented Kiradech swept the Players’ Player of the Year title and Special Achievement Award to go with the prestigious Order of Merit crown.

Thongchai was named the Player of the Decade (2004-2013), an award voted by the players in conjunction with the Asian Tour’s milestone 10th season last year following its establishment as a players’ organisation in 2004.

The 24-year-old Kiradech won once and posted five other top-five finishes in 2013 to earn over US$1 million, becoming only the second man to achieve the feat in Asian Tour history.

“My success on the Asian Tour would not have been possible without the strong support from my family. I want to thank them tonight and I also want to pay tribute to my late coach Natpasit Chokthanasart (nicknamed Pro Jew) who passed away late last year. He played a key role in shaping my game and made me become the player that I am today,” said Kiradech.

The auspicious evening also feted the Asian Team heroes who had staged a memorable comeback to share the inaugural EurAsia Cup presented by DRB-HICOM with Team Europe in Malaysia last month.

The night belonged to Kiradech and Thongchai, the Asian Team captain, as Asian Tour Chairman Kyi Hla Han, in his speech, marvelled at the Tour’s growth over the past decade which has sanctioned over 260 tournaments and offer in excess of US$330 million to the region’s finest players.

Like Kiradech, Thongchai also bagged a hat-trick of awards, taking home the Lowest Stroke Average (69.46) and Greens in Regulation (75%) titles along with the Player of the Decade title. The other nominees were India’s Jeev Milkha Singh, Thailand’s Thaworn Wiratchant and Korean duo K.J. Choi and Y.E. Yang.

“I’m very thankful to the Asian Tour as this is the Tour that gave me my first big break. It also provided me with numerous opportunities to develop my game and compete on the global stage. I’ve witnessed tremendous growth in the Asian Tour since it was first established and I can only see it becoming an even stronger Tour,” said Thongchai, who has an unprecedented three Asian Tour Order of Merit titles and 13 victories under his belt.

Canada’s Richard T. Lee scooped the Rookie of the Year Award after his memorable debut season where he posted three top-10s to finish in 32nd place on the Order of Merit. Lee has since claimed his maiden Asian Tour title, winning the Solaire Open in Manila last month.

Australia’s Scott Hend, who enjoyed three brilliant victories in Thailand, Chinese Taipei and Macau, won the Driving Distance category with an average driving distance of 317 yards. He has now earned this bragging right on four occasions since 2009.

Brazil’s Adilson Da Silva proved to be the straightest driver on Tour when he won the Driving Accuracy Award with 77.23% of fairways hit and Thailand’s Chapchai Nirat chalked up the most number of birdies to become the Birdie Leader of 2013 with a haul of 308 birdies.

Indian veteran star Jeev Milkha Singh was the best putter last year with his 1.71 putts per green in regulation ratio.

Han said: “I look back now at our journey from 2004 and marvel at how the Asian Tour has established ourselves as the third largest Tour in the world today. I dare say the Asian Tour is now in a very strong position to lead and grow Asian golf into the next decade and beyond, thanks to our success which has been built on a solid foundation comprising of an astute Board of Directors, a dynamic Management Team and a Tournament Players Committee whose role is to safeguard the interest of our members.”

Rookie of the Year: Richard T. Lee (Can)