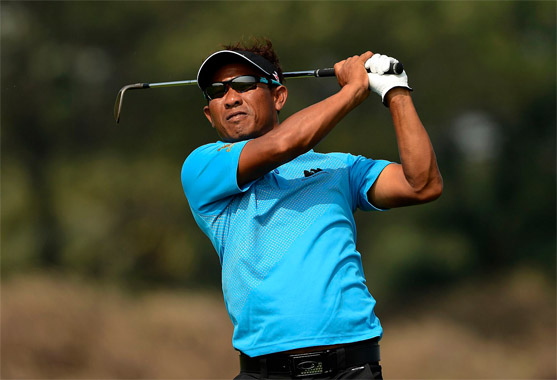 Decorated Thai star Thongchai Jaidee announced today that he will host his own tournament, the Thongchai Jaidee Foundation 2015, for the first time at the award-winning Black Mountain Golf Club in Hua Hin, Thailand, from September 10 to 13.

A total of 156 players will compete in the four million baht (approximately US$111,808) event, which includes 20 invite spots offered by the man himself, who will also be in the field. The remaining spots will be split between the ADT and the All Thailand Golf Tour.

The 45-year-old Thongchai, who holds an unprecedented three Asian Tour Order of Merit crowns and 13 titles, will become the third Asian Tour player after Korea’s K.J. Choi and compatriot Boonchu Ruangkit to host his own tournament in Asia.

The addition of the inaugural Thongchai Jaidee Foundation 2015 will also make it a record total of 25 tournaments on the ADT schedule this season since the burgeoning Tour was launched in 2010 as a gateway to the premier Asian Tour.

Despite shifting his attention to competing on the world stage in recent years, Thongchai has always kept his roots in Asia at the back of his mind.

In 2009, he signaled his intent to give back to the game by launching the Thongchai Jaidee Foundation to help under-privileged golfers in his hometown of Lopburi.

Through the staging of his own tournament in September, Thongchai hopes to draw attention to his growing foundation and at the same time, create playing opportunities for the region’s rising stars.

“At the Thongchai Jaidee Foundation, our mission is to give back to society. We have helped raised kids by giving scholarships, golf lessons and accommodation so far. We want to provide them with the knowledge of the game which could probably earn them a living one day,” said Thongchai, currently ranked 41st position in the world.

Thongchai’s commitment to develop the game of golf in the region was largely inspired by Thai veteran Boonchu, who had an ADT tournament named after him to honour his achievements in the game earlier this year.

“Boonchu is a widely-respected player in Thailand and I was really inspired by his determination and commitment to give back to the game. Having already set up the Thongchai Jaidee Foundation, I thought I can contribute as well.

“The ADT has grown immensely over the years and it is the best platform to start this initiative. I hope we can create more playing opportunities and nurture future talents of the game through the staging of this event,” added Thongchai.

Asian Tour Associate Director Irfan Hamid said: “On behalf of the ADT, we are delighted to sanction the Thongchai Jaidee Foundation 2015.

“Thongchai has been one of our most successful golfers for over a decade and his tournament will be an inspiration to young golfers across the region,” added Irfan.