Home International Three and easy as Azarenka romps into third round 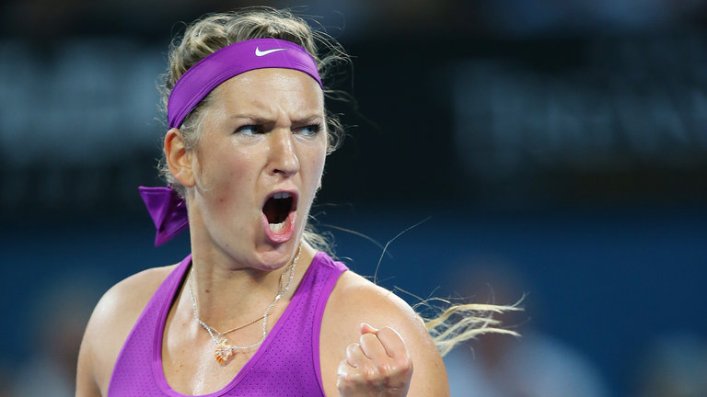 Two time champion Victoria Azarenka kept up her scintillating early-season form Thursday as she reached the Australian Open third round for the loss of only three games in total on Thursday.

The Belarusian former world number one was again in fine touch as she hammered Montenegro’s Danka Kovinic 6-1, 6-2 on Margaret Court Arena to progress.

It followed her dominant “double bagel” 6-0, 6-0 first-up win against Belgian Alison Van Uytvanck, and sent another warning to the likes of defending champion Serena Williams and Maria Sharapova.

“I really don’t count the games,” she said when asked about dropping just three heading into the tournament’s first weekend.

“I think what really works for me is to stay in the moment, it keeps me focused and that helps to play. I try to keep myself on the court and I play every point like it’s my last point.

“I know it’s a long way to go, that’s why I like to stay in the moment and just go day by day, enjoy the journey.”

Azarenka came into the tournament on the back of winning the Brisbane International and she was again untouchable against Kovinic.

Seeded 14, she has been working to get back in the groove after a torrid two years battling injuries, and the 54th-ranked Montenegrin was no match for the ferocious all-court game of a player now fit and healthy.

The Belarusian was focused from the outset and immediately stamped her authority on the match, breaking to go 1-0 ahead.

Kovinic, making her Australian Open debut at the age of 21, never looked a threat and quickly fell 2-0 behind.

She held her serve for 1-2, the first game Azarenka has lost in the tournament, but it was just a temporary blip for the Belarusian who put her foot down and raced through the set is just 29 minutes.

Kovinic fought gamely in the second set but she was no match for the powerful Azarenka, who broke in the sixth game and never looked back, dominating both at the net and from the baseline.

Nicknamed “Vika” and renowned in the past for fiery on-court outbursts, Azarenka won the tournament in 2012 and defended the following year at what is her most successful Grand Slam.

With Kovinic swatted aside, she now faces Japanese qualifier Naomi Osaka. If she gets through that test, she could meet Spanish third seed Garbine Muguruza in the fourth round. – Agence France-Presse