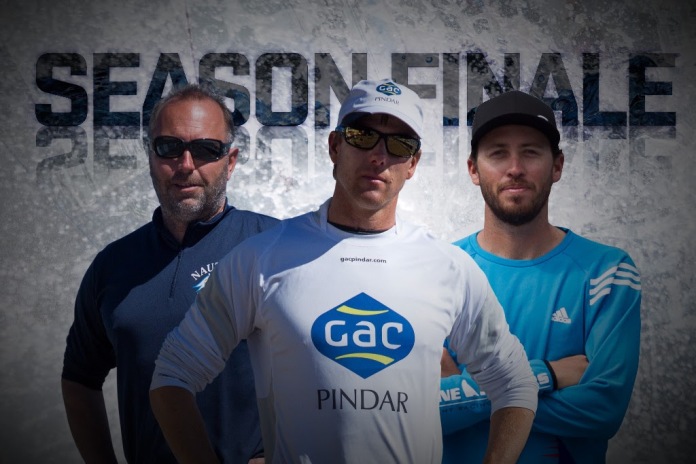 A number of factors are conspiring to make this year’s Monsoon Cup in Malaysia perhaps the most dramatic and unpredictable finale in the long, illustrious history of the World Match Racing Tour.

First is the fact that the top three teams are, as near as makes almost no difference, tied on points. Nominally the reigning World Champions Ian Williams and GAC Pindar hold a 2-point advantage over Bjorn Hansen and Nautiska Racing, with the 2013 World Champion Taylor Canfield and US One another 3 points back from the Swedes.

With the Monsoon Cup holding a weighting factor of 1.5 points compared with all the other Championship events already completed so far in the Tour season, it means that if any of these top three teams wins the regatta, they will also win the 2015 Tour and become World Champions. That would be a particularly sweet moment for Hansen who, now in his late 40s, has yet to take his first world title.

There are a couple of other outside bets for the overall championship, Keith Swinton and Black Swan Racing and Phil Robertson and WAKA Racing, although the chances of either the Aussie or the Kiwi team winning the season are mathematical, and rely on the top three all having a particularly bad week in Johor Bahru, the racing venue in the very south of Malaysia, just over the border from Singapore.

Still, if last year’s regatta is anything to go by, the Straits of Johor can be notoriously light and fickle. These waters threw up quite a few surprises and made for very exciting and unpredictable match racing 12 months ago. There is yet another fly in the ointment, and that is the introduction of the FarEast 28 keelboats to the Tour for the first time. It’s a boat that none of the leading lights have any experience of racing and, at just 28ft long, requires only four crew as opposed to the usual five seen on most World Match Racing Tour events. This could have a destabilising effect on the more established crews.

Hansen and Williams are not enjoying having to drop one of their regular five from their crew line-up. “With five I think that’s where we’ve had a real edge in the past – we’ve always been focused on that,” said Williams. “So the change down to four takes away perhaps some of the gains we’ve made.”

The GAC Pindar crew has yet to sail the FarEast 28, so all his crew – Williams plus Ricky McGarvie, Mal Parker, Chris Main and Gerry Mitchell – will be in Johor for a quick trial before Williams decides who has to stay ashore for the regatta. “We’re going to try the boats out and work out what the best compromise is,” said the five-time World Champion from Great Britain.

What will give Williams great hope is that at last year’s event, the first time the Monsoon Cup took place at this tricky venue, GAC Pindar absolutely wiped the floor, winning 19 matches and dropping just one, an incredible show of consistency. Where most competitors were struggling to sense of the conditions, Williams and his then tactician, the moustachioed Chris Main, seemed to possess a sixth sense. So confident was Main in his team’s abilities that having won their semi-final match 3-0 against Switzerland’s Eric Monnin, the piratical Kiwi bucked typical sailors’ superstition and shaved off his ‘Magnum’ moustache with gay abandon, before going back out to do battle in the Final against France’s Mathieu Richard. That was another 3-0 victory for Williams and, if the Great Briton can repeat last year’s form, the Monsoon Cup and a record sixth world title will be his.

Williams has won three Monsoon Cups (2007, 2011, 2015), Canfield has won just once in 2012, while Hansen has never won in Malaysia, and was only 9th in Johor Bahru 12 months ago. So the Swede has his work cut out, but no one wants that world title more badly than Hansen and it will be fascinating to see if he can make his passion and desire work to his advantage in the coming week.