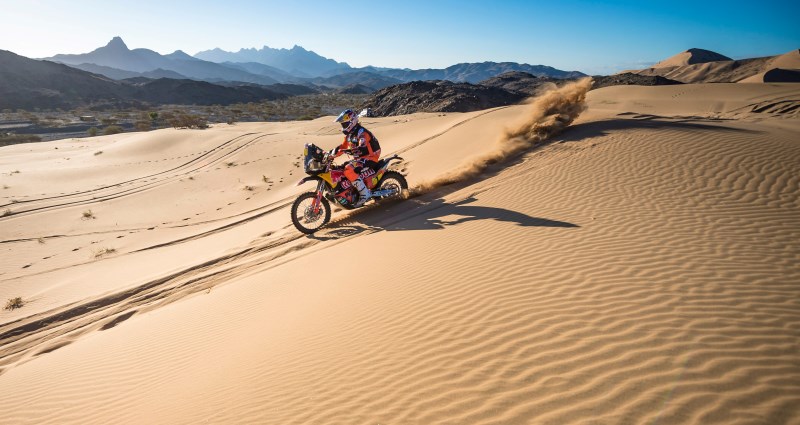 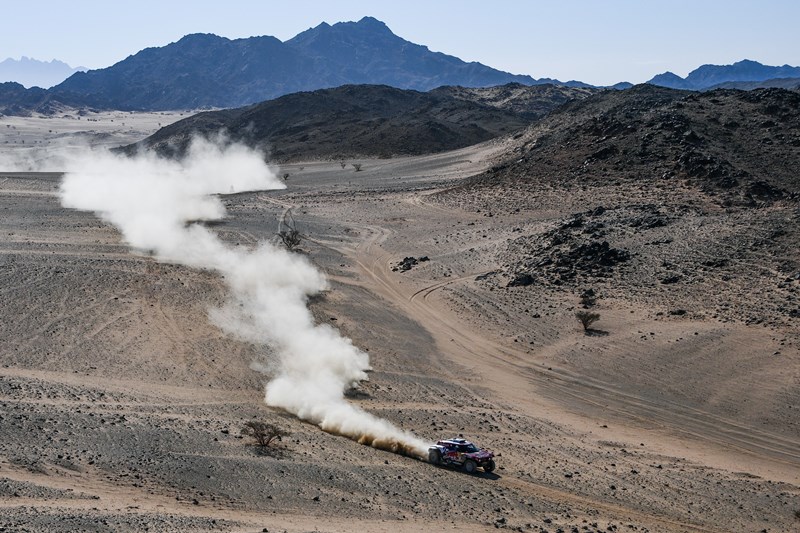 The 2020 Dakar Rally kicked off the first-ever race to be held in Saudi Arabia on Sunday as 342 vehicles took off on the opening stage, racing 752km from Jeddah to Al Wajh. Here’s all you need to know:

– It was a pre-sunrise start for the Dakar convoy, as the bikes set off first on the desert route to Al Wajh, followed by the quads, cars, side-by-sides and finally the trucks.

– Defending champion Toby Price (AUS) of Red Bull KTM Factory Team took the stage win and secured the fastest time of day, all while riding blind after his roadbook tore completely at the 15km mark.

– Price revealed: “It went well. It was a hard day, but it went well. My roadbook walked out on me after 15-odd kilometres, so it was strange. I was quite lucky in one way because I managed to follow on some dust and just keep up with the guys. Once the road book is gone, then you’re pretty much driving blind. At the moment it looks good on paper, but I think we have a bit of a penalty coming. It’s not the greatest start, but it’s still a long rally to go. We’re in good shape, we feel good on the bike, and we’re happy.”

– Price and Walkner’s fellow Red Bull KTM Factory Team riders, Sam Sunderland (GBR) and Luciano Benavides (ARG,) are also in the striking distance, remaining in the Top 10 after the first day of racing.

– In the car category, English navigation proved to be a new challenge between Stéphane Peterhansel (FRA) and co-driver Paulo Fiuza (PRT) as costly errors opened up the lead for surprise winner Vaidotas Zala (LTU) of Team Agrorodeo, with Peterhansel crossing the line in second.

– Stéphane Peterhansel revealed: “We wandered around a bit and must have lost three to five minutes looking for a hidden waypoint. The directions were hard to understand in English; I must be going soft in the head. In twenty-one editions of the Dakar, I’ve never had a co-driver talk to me in English.”

– In third place is Peterhansel’s fellow MINI Buggy driver Carlos Sainz (ESP), just one place ahead of defending car class champion Nasser Al-Attiyah (QAT). Al-Attiyah led the stage for most of the day before a succession of punctures plagued his Toyota Hilux late in the stage.

– Carlos Sainz said: “We got lost once and had to backtrack, which cost us some time. We also had a flat tyre. However, it wasn’t too bad after all because I was under the impression we’d lost fourteen or fifteen minutes. You really need to pay attention to navigation.”

– It was a brilliant stage opener for the Red Bull Off-Road Team USA SxS Rookies. Mitch Guthrie Jr. (USA) scored a Top 10 on his first-ever Dakar stage. However, team-mate Blade Hildebrand (USA) has his work cut out for him, as he tries to claw back 35 minutes.

– The SxS coaching crew of Cyril Despres (FRA) and Mike Horn (SUI) were placed in the Top 5 up until kilometre 254 of the stage where overheating issues hampered their efforts the final 60 kilometres.

– The second stage of racing takes the convoy to Neom with 401km and a Special Stage of 367km that gives riders views of the Red Sea and throws some navigational challenges into the works.