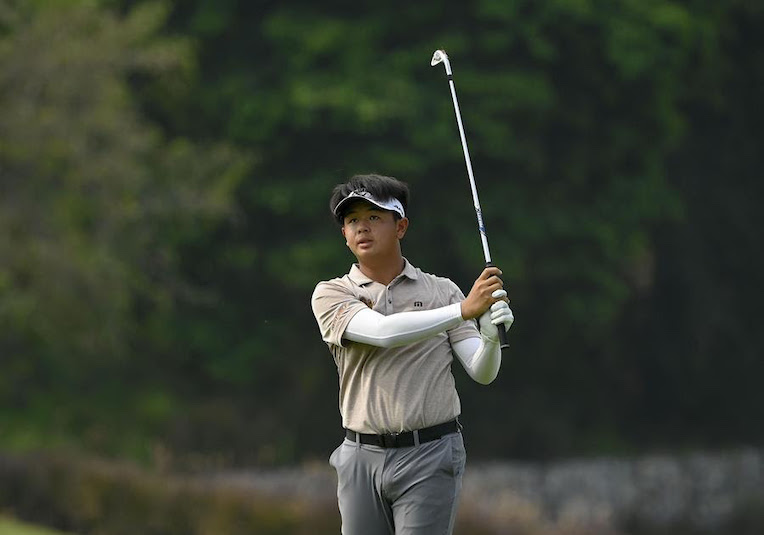 Thailand’s 15-year-old amateur marvel Ratchanon Chantananuwat, aka “TK”, will add another string to his bow his week when he competes in the Asian Tour’s first ever mixed event, the US$750,000 Trust Golf Asian Mixed Cup, and says he has every expectation that “the ladies here can bomb it!”.

The tournament tees-off tomorrow at Siam Country Club’s Waterside Course and is being jointly sanctioned with the Ladies European Tour (LET).

“I am very excited, this is definitely something different,” said the youngster.

“I am going to assume a lot of the ladies here can bomb it! I am not going to overlook the importance of making the cut as there could be 40 girls who make the cut this week and that’s going to be tough.   If I make the cut, then I am going for the win. There’s a lot of World Ranking points this week so I am going to get as many as I can.”

Making the cut has never been an issue for him: he has made it through to the weekend in all six events he has played in since the end of last year. He nearly won one of them, The Singapore International, where he placed third.

He has been paired with Norway’s Marianne Skarpnord, a five-time LET winner, and Ursula Wikstrom from Finland for the first two days.

There’s no doubt the teen titan will impress, although he has been bogged down studying and preparing for exams recently.

“Honestly, I have been up to a lot of schoolwork, so haven’t had as much chance to do some serious practice,” he said.

“Over the weekend and past few days, I have been doing a bit more golf, so I am getting more and more ready. I still need to put in a little more work at the range today, but I should be ready by tomorrow.”

In his last outing on the Asian Tour, he tied for 11th in the International Series Thailand last month.

Said Ratchanon: “I got a ton of exams, it’s building up because it’s almost June and I also have the SEA Games coming up, it’s not a big, big, tournament but it’s not me anymore this is for the country, and I don’t want to disappoint. I am doing two IGCSE subjects early, biology and economics so that’s also in May two days before I fly so I have to do extra schoolwork and extra golf so it’s probably the hardest time for me to balance the two right now. If I want to win, I need to practice more.”

This week’s ground-breaking tournament features 60 Asian Tour players and 60 LET players, along with 24 sponsor invitations, playing for the same prize fund and trophy. The only difference is the women are playing off forward tees.

Competitors will stay on for the Trust Golf Asian Mixed Stableford Challenge next week at the same venue. The event will also boast a purse of US$750,000 and be jointly sanctioned by the two Tours.

Each tournament will offer Official World Golf Ranking points, and count towards the Asian Tour Order of Merit and LET’s Race to the Costa del Sol.