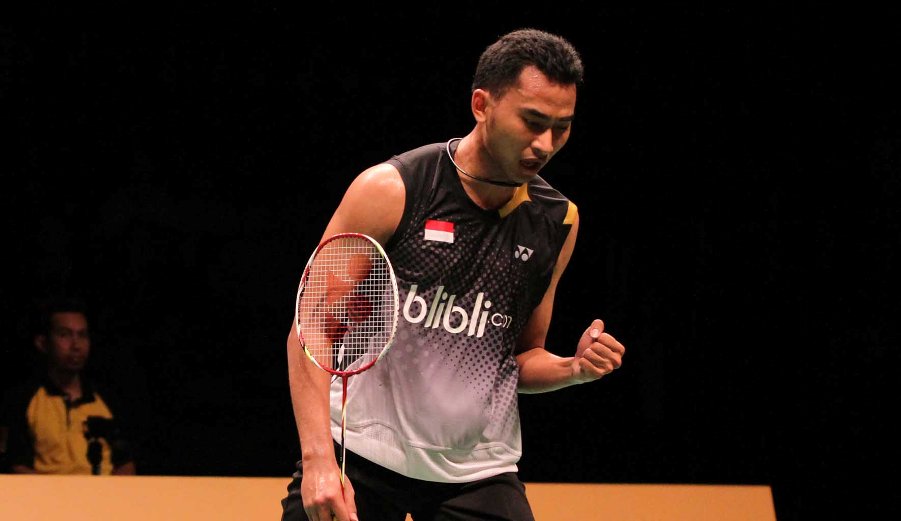 * Vietnam too strong for Singapore

INDONESIA have established themselves as firm favourites when they slaughtered the Philippines 4-0 with their top ranked men’s singles shuttler Tommy Sugiarto leading the charge with a 21-6, 21-10 win over Antonio Benyamin Gadi for his first taste of action in the third edition of the Axiata Cup at the Britama Sport Mall in Jakarta in Sunday.

Sunday’s afternoon session also saw Vietnam register a 4-0 whitewash of Singapore – their first win in Jakarta after four days of competition in the round robin league involving eight teams. The top four teams will move into the semi-finals. The semis and the final will be played in Kuala Lumpur on Dec 6-7.

With enough depth in the men’s singles, Indonesia have the luxury of rotating their players. Apart from Tommy, Indonesia’s other players in the men’s singles is rising start Dionysius Hayom Rumbaka, Simon Santoso and Ihsan Maulana Mustofa. Except for Ihsan Maulana, all the others have seen action in the 3rd edition of the Axiata Cup – the richest badminton team event with USD1,million up for grabs.

Indonesia were the inaugural champions in 2012 but suffered a shock 3-0 defeat to Thailand in the semi-finals last year. Malaysia are the defending champions, beating Thailand 3-1 in the final.

Tommy flew in from Kuala Lumpur on Saturday where he plays for Puchong BC in the Malaysian Purple League. He will be available for Indonesia’s remaining matches in the round robin league – against Singapore (Monday), Europe (Tuesday) and Thailand (Wednesday).

“I must admit that we have ample depth in the team. I fielded Tommy against the Philippines for him to get the feel of the court, lighting, draft and the environment,” said Indonesia’s coach-manager Aryono Minarat.

Tommy who also featured in the previous two editions of the Axiata Cup, said: “For now my priority is to help Indonesia in the Axiata Cup. Last year’s defeat to Thailand in the semi-finals is still fresh in our minds. I am ready for the challenge if asked to play,” said the soft-spoken Tommy, a bronze medallist at this year’s World Championships in Copenhagen.

Others who got their first taste in the tournament on Saturday were men’s doubles Gideon Markus Fernaldi-Kevin Sukamuljo who won 21-14, 21-9 against Swiss Open champions Paul Jeffersen Vivas-Peter Gabriel Magnaye, ranked 74 in the world.

Alfian Eko Prasetyo-Annisa Saufika snatched a 21-13, 21-13 win over Ronel Eastanislao-Eleanor Christine Inlayo in the mixed doubles to complete the rout for Indonesia.

Lack of international exposure and experience stood out like sore thumb for Singapore. It was a battle in vain against the Vietnamese. In the men’s singles 18-year-old Penang-born Loh Kean Yew gave Nguyen Hoang Nam a run for his money in a closely fought match that lasted 56 minutes before the Vietnamese won 23-25, 21-16, 21-18.