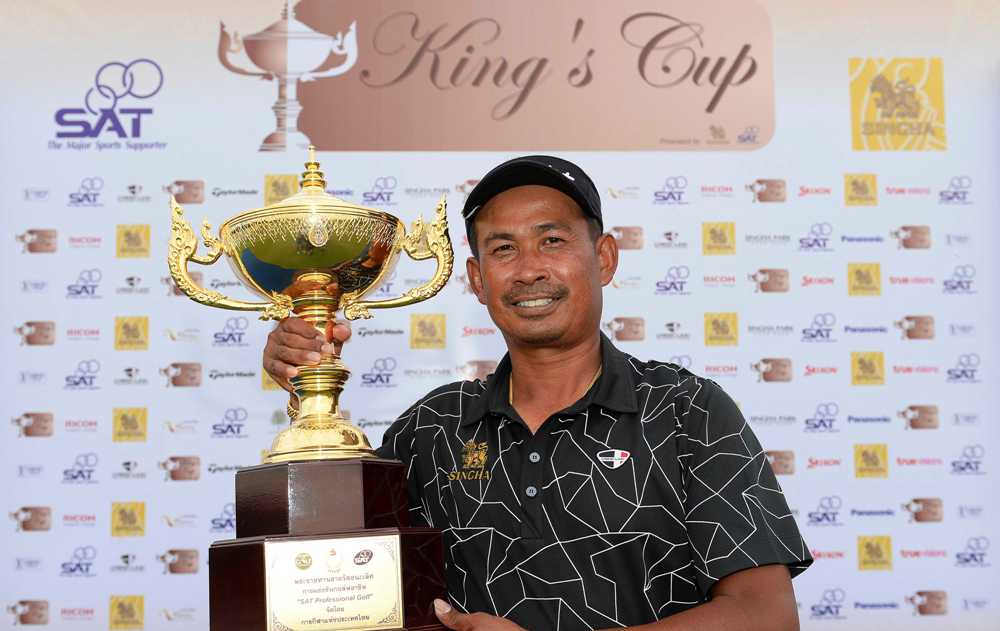 Thailand’s Thaworn Wiratchant rewrote the record books by winning an unprecedented 18th Asian Tour title after he closed with a five-under-par 67 to lift the King’s Cup on Sunday.

With his second victory on the region’s premier Tour this season, the Thai veteran also completed his royal collection having won the Queen’s Cup twice in 2012 and 2014 when it was staged as an Asian Tour event.

India’s Anirban Lahiri, who led from the opening day, had to settle for a share of second place with Australia’s Andrew Dodt while Qualifying School graduate Kalem Richardson of Australia enjoyed another good outing in Thailand by taking a share of fourth place with Thailand’s Donthai Boonma and Paul Paterson of the United States.

Trailing overnight leader Lahiri by one shot, Thaworn set off with a blistering pace by reaching the turn in 32 at the Singha Park Khon Kaen Golf Club.

He picked up another advantage with a birdie on 10 before dropping his only shot of the day on the par-four 12.

“It was not easy out there as Anirban and Andrew were piling the pressure on me. It got a little shaky on 12 when I bogeyed for the first time today. But I maintained my composure and managed to see it through,” said Thaworn.

Walking up to the 18th hole, the Thai veteran was determined not to let the contest go into a play-off with Lahiri and Dodt who were at 18-under.

“I really wanted to birdie 18 as I did not want to go into a play-off. I was confident of winning in regulation play but not in a play-off,” said Thaworn.

Thaworn remained steady under pressure by draining his 15-ft birdie putt to close with a winning total of 20-under-par 268.

“It feels good to have the complete Royal collection now. I won the Queen’s Cup and now I can add the King’s Cup to my trophy cabinet,” said a jubilant Thaworn.

Lahiri was visibly disappointed not to have won again as another victory at the US$500,000 event would have meant more world ranking points and allowed him to close the gap on Order of Merit leader David Lipsky of the United States.

“I wasn’t at my best today as I was really struggling on the greens. I had my chances and I just didn’t take them. I don’t think I played poorly but it was just not good enough to close it out.

“I just missed way too many putts and it was disappointing to miss a short one on the last and that is going to hurt my world rankings. I’m upset with that. I just got to pick myself up and win next week,” said the 27-year-old Indian.

Dodt made a late charge by firing successive birdies in his closing three holes to give himself a glimmer of hope for at least a play-off.

But with Thaworn at his best, the Australian had to settle for second best.

“I thought that if I could birdie the last three holes and even eagle the last, I’ll be in for a chance. I hit a good putt on the last but it didn’t go in but full credit to Thaworn as he’s a world class player and managed to finish it off,” said Dodt.

Leading scores after round 4 of the King’s Cup being played at the par 72, 7449 Yards Singha Park Khon Kaen GC course (a- denotes amateur):