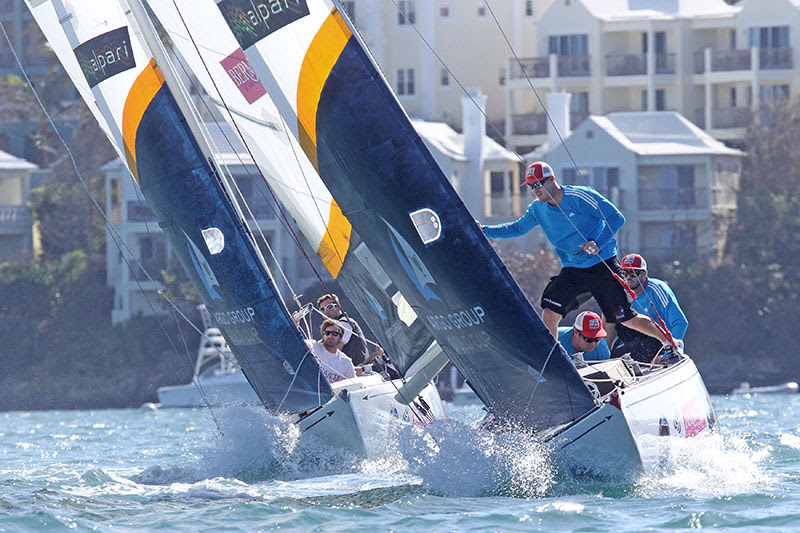 Picture postcard perfect conditions returned to Bermuda for the third and final day of Qualifying at the Argo Group Gold Cup, the sixth stage of the 2014 Alpari World Match Racing Tour. After yesterday’s torrential rain, Hamilton Harbour was bathed in glorious sunshine and breeze that by lunchtime was gusting up to the mid-teens.

With the conclusion of Qualifying, the top four of the ten teams in each of the two Groups made it through to the Quarter Finals while a surprisingly high number of Alpari World Match Racing Tour card holders failed to make the cut. In fact just three – Ian Williams and his GAC Pindar crew, defending Tour champion Taylor Canfield and his US One team and Bjorn Hansen – made the top eight.

While the 2014 Alpari World Match Racing Tour leaders, Williams and Canfield, qualified in comfort yesterday, ending the series on 8.5 and 8 points respectively, with Bjorn Hansen and former Tour Card holder Johnnie Berntsson also standing out in Group 1, for the final four it was the usual close run thing. This was particularly true for Group 2 where in the final flight the winner of the Monnin v Poole and Gilmour v Stanczyk matches would go through while the loser would be on the flight home. Ultimately it was Switzerland’s Eric Monnin and Poland’s Marek Stanczyk and his Henri Lloyd Rainmaker Racing crew that were successful.

Stanczyk was over the moon to have got through after a bumpy ride through this regatta, leading the first day while one of his crew suffering an injury yesterday. Today he bounced back.
“I feel very good,” he said. “I was a little disappointed in the first race which we lost because of a problem with the jib tack which we didn’t solve as well as we should have. We sailed the second upwind leg with the jib totally eased.”

His crew Lukasz Kacprowski was back on board with a plaster covering the gash to his forehead, caused when he was hit by the boom yesterday as the Polish team threw themselves into a penalty turn in their match against Taylor Canfield. “He had the choice of having the cut stitched or glued and he had it glued because he is worried about his looks and didn’t want stitches!” confided Stancyzk.

For Tour Card Holder David Gilmour the outcome today was less good, losing their final match to the Poles. “We felt in control of most of the prestart and then we made one small mistake right at the end – I tried to go for the kill rather than just getting a clear start and that cost us the whole race. I look back to the rest of the regatta and we had so many missed opportunities, which made it quite tough,” said Gilmour.

France’s Mathieu Richard and his LunaJets crew also came close to making it through in Group 2, but were put out of the running when they were docked 0.5 points for causing damage following a collision in their match against Canfield.

In Group 1, the outcome was a more complex and controversial one. This stemmed from a pre-start collision between Francesco Bruni and his Luna Rossa team and Keith Swinton’s Team Alpari FX crew.

Swinton described it: “There was a dial-up – we were on starboard, they were on port. I think there was a bit of extra pressure today which we hadn’t really sailed in yet in this event and I just misjudged the dial-up and maybe turned up a little bit too late and we had small contact with them – our bow just hit the side of their boat. We were turning slightly later than him, so we got the penalty.”

This collision saw Swinton docked 0.5 points and unhappy with this decision Swinton resorted to the jury. A hearing was promptly held and it was deemed that the points deduction had been appropriate. With this his Quarter Final berth evaporated.

“We had a feeling that potentially the damage had been caused previously to that boat,” explained Swinton. “But the boat guy said we had caused some damage, so unfortunately we lost half a point and that made all the difference. It was unfortunate. We’ll just have to put it behind us.”

“We were a bit lucky, because we lost two races today,” admitted Morvan, who finished fifth at the Chicago Match Cup recently. “We need to up our level for the quarters.” The match that Morvan felt had made the most difference to their scoreline was when they beat defending Argo Group Gold Cup champion, Francesco Bruni and his Luna Rossa America’s Cup crew.

The quarter finals flight got underway this afternoon and will be completed tomorrowmorning at 0900 ADT, when conditions are set to turn lighter.