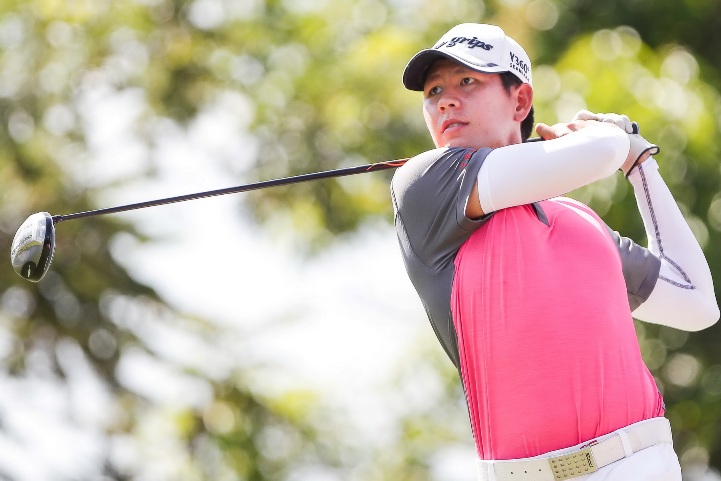 The talented Thai rode on a superb front nine 31 highlighted by five birdies, including four-in-a-row from the third, to lead by one shot alongside newcomer Nabetani and Fernando, who posted a bogey-free round, at the Manila Southwoods Golf and Country Club’s legends course.

Natthapong, chasing for a breakthrough ADT victory, is excited about his prospects after grabbing a share of the clubhouse lead.

The 27-year-old Thai, who started from the first hole, was flawless in his outward nine before trading three birdies against two bogeys on his way home.

“I felt very good out there. I hit my short irons really well. This is not an easy course but I think it suits my game. The stretch of birdies on the front nine got my momentum going and I am feeling confident for the next three rounds.” said Natthapong, who enjoyed a top-10 finish on the ADT in Malaysia last month.

Nabetani, playing in only his fourth start on the region’s burgeoning Tour, wielded a hot putter and needed only 26 putts around the course.

“The course is really nice. I love the layout here and the conditions are very good, especially the greens. I am happy to get off to a good start. Hopefully I can remain like this for the rest of the week,” said the 19-year-old Japanese, who fired eight birdies against two bogeys.

Play was suspended at 3.53pm local time due to lightning threats before resuming at 5.10pm. It was later abandoned for the day at 6.30pm due to fading lights. A total of six players will return to Manila Southwoods to resume their first rounds at 7.30am on Thursday morning with the second round to start at 7.00am as originally scheduled.

The ICTSI Manila Southwoods Championship is the 10th leg of the 2016 ADT season and also the start of the Tour’s two-week swing in the Philippines. The ICTSI Sherwood Hills Classic will take place at the Sherwood Hills Golf Club from April 20-23 next week.

Like all other ADT events, the ICTSI Manila Southwoods Championship will offer Official World Golf Ranking (OWGR) points, which will be key for players vying to qualify for the Olympic Games in Rio de Janeiro this August.