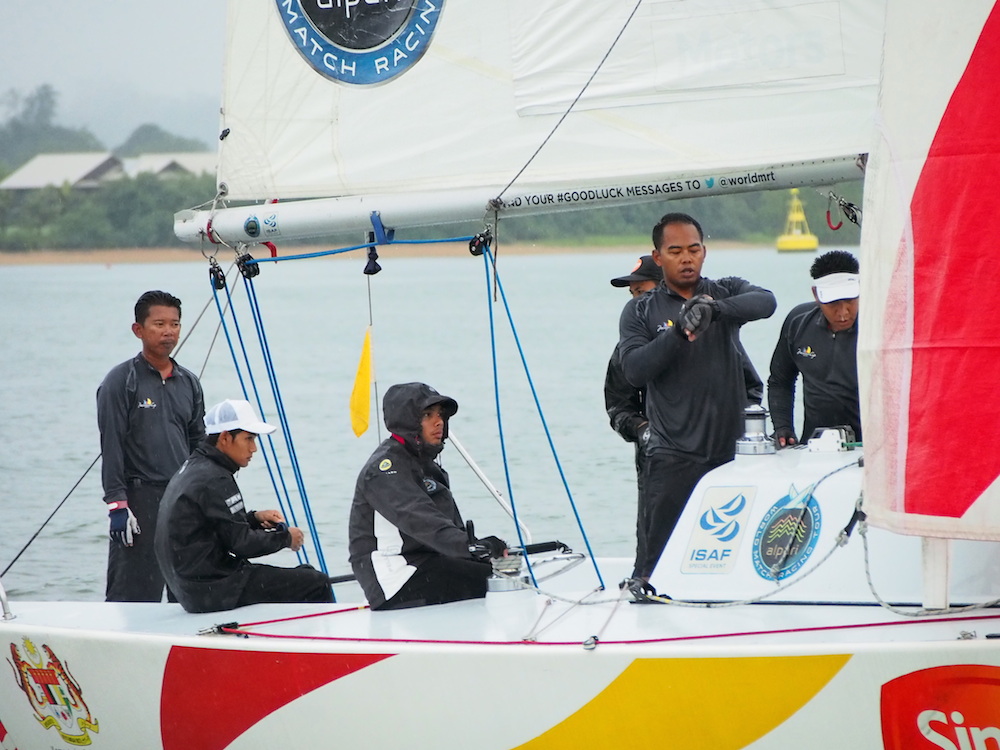 KUALA TERENGGANU – Experienced sailor Jeremy Koo made no sweat of the unpredictable weather conditions as he skippered Sime Darby Foundation 1Malaysia Match Racing Team to two wins out of two matches on the first day of the Liga Layar Malaysia 2014 Pulau Duyong edition.

Sailing with two new crew members, Koo said the wins provided a good momentum for his team as they cast one eye on Monsoon Cup Terengganu competition next week.

“I am pleased with our performances today. We sailed with two new crew members but we got along very well. The teamwork we showed was fantastic,” said Koo.

The Kuala Lumpur-based sailor spoke of the unpredictable wind conditions which made things difficult for his team during both flights.

“The weather was very tricky for us. The wind was very light and it was hard to tell where it was coming from, but the team still managed to do a fantastic work,” said Koo, adding that he was hoping for stronger winds on Day Two.

“I hope there will be at least moderate if not strong winds tomorrow, as that is where our team is strong,” said Koo.

23-year-old Nurul Elia’s team ended Day One joint second with the second team from 1Malaysia Match Racing Team, skippered by Hazwan Hazim Dermawan, after winning one out of two matches.

Her team’s win came against RMNMRT/151 Onesails, skippered by her mentor Ishak Jab.

Nurul Elia however downplayed her win against Ishak and she had no point to prove against the man who taught her the ropes of sailing in her early years.

“It was a good fight against him (Ishak) but as my team in this competition was only assembled in the last minute, we just wanted to enjoy the sailing,” she said.

The Putrajaya girl, who skippered all-girl team MYA Angels in Liga Layar Malaysia 2014, said it was the first time she sailed through a heavy downpour.

“I have competed at Pulau Duyong in 2009 and 2010 and I knew the conditions were always tricky, especially due to the unpredictable wind patterns.

“However, the rain was heavier today compared to those years, which made it a bit tough,” said Nurul Elia.

With two more days of the competition left, Nurul Elia has her eyes set on the prize money on offer at the Liga Layar Malaysia 2014 Pulau Duyong edition and believes her team has every chance of winning it.

“We are targeting the top prize but we also do not one to stress ourselves out with it, it is also important that we have fun at the same,” she said.

The remaining matches of the first round robin and the second round robin will be played on Sunday.

The winner of the Liga Layar Malaysia 2014 Pulau Duyong edition will win RM6,000 prize money, while the runner-up and second runner-up will win RM4,000 and RM3,000 respectively.

The current standings after Day One are as follows:

About Liga Layar Malaysia
The Liga Layar Malaysia (LLM) is a league format match-sailing competition that was conceptualised to give an opportunity to local sailors to gain exposure through competitions held in various states in the country. Since its inception, there has been an improvement in the Malaysian sailing industry in terms of public interest and support, facilities, number of instructors, sailors and sailing training centres. This year, the LLM will be held at 8 different locations, namely Pulau Langkawi, Kedah; Lumut, Perak; Pulau Indah, Selangor; Putrajaya, Port Klang, Selangor; Port Dickson, Negeri Sembilan; Pulau Duyong, Terengganu and Danga Bay, Johor Bahru. The winner of each LLM leg will take home RM6,000 in prize purse, second and third place pockets RM4,000 and RM3,000 respectively while fourth and fifth place takes home RM1,000 each. One team will be selected in the penultimate leg of the competition to represent the country at the Monsoon Cup, which is the final leg of the World Match Racing Tour.