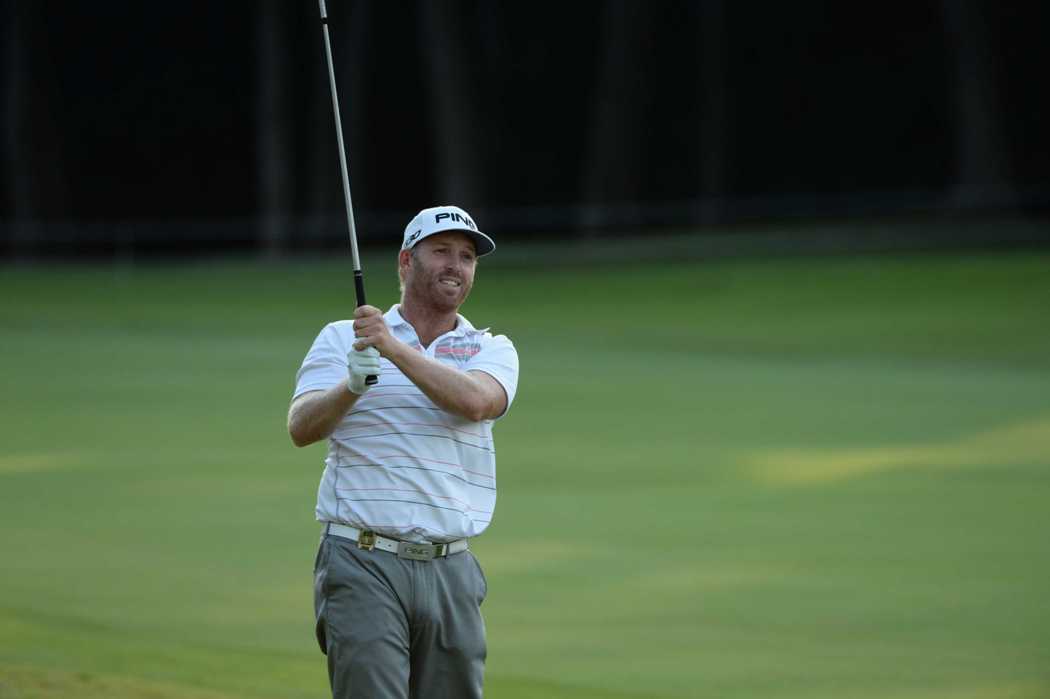 Unheralded Adam Bland of Australia got the Japanese crowd to take notice of him after he fired a three-under-par 68 to take the second round lead at the 150 million Yen (approximately US$1.5 million)  Asia-Pacific Open Golf Championship Diamond Cup on Friday.

The 32-year-old Australian compiled a two-day total of five-under-par 137 to take a slender shot lead over Thailand’s Prayad Marksaeng and Korea’s S.K. Ho who signed for matching 138 totals at the Ohtone Country Club.

Korea’s Baek Seuk-hyun, who is currently in eighth place on the Asian Tour Order of Merit, returned with a 69 to share fourth place with four other players that also included China’s Liang Wen-chong.

Bland, who hails from Adelaide, earned his stripes on the Japan Golf Tour when he made the grade at their Qualifying School in December last year.

Prior to his commanding performance at the Asia-Pacific Diamond Cup, Bland has only missed the cut twice in 11 starts with a tied-fourth finish in Nagoya in April as his best result on the Japan Golf Tour so far.

“This is my first year out in Japan and I’m really enjoying myself. I’m definitely in a good position to chase my first win here and I’m really looking forward to the weekend rounds. It should be good,” said Bland.

With the course proving to be a mean test, Bland’s cautious approach was vital as he marked his card with five birdies against two bogeys at the Japanese showpiece which is sanctioned by the Asian Tour and Japan Golf Tour.

“It’s a tough golf course and you’ll be lucky if you can get to the greens if you miss the fairways. Five-under is good and hopefully I can keep it going.

The winds definitely picked up in the afternoon and anything around par is a good score. I just kept it on the fairways and made my opportunities when I hit those good shots,” said Bland.

Prayad showed his affinity for Japan once again when he took the morning clubhouse lead with a 69.

The Thai ace, who is an eight-time Asian Tour winner and four-time champion in Japan, started his round three shots off the lead but quickly got back into the mix by trading five birdies against three bogeys.

Apart from the therapeutic effects of the Japanese hot springs, the 48-year-old believes his playing experience in Japan has provided him with a competitive advantage.

“The secret to my success is the Onsen here! I feel revitalise after every visit. That’s why I’ve a good track record in Japan.

Over the years, I’ve learnt how to control my speed and putt well in such conditions here. Most of the golf courses are straight and narrow and I know accuracy is important. I only missed two fairways yesterday and today I missed just one,” smiled Prayad.

Having been forced to retire in Malaysia last week, Baek roared back to life with a performance that could bring him closer to his breakthrough on the region’s premier Tour.

“I’m happy with my score as it’s hard to put the ball on the fairway especially on this golf course. I missed several birdie chances on the back-nine but overall still pretty pleasing,” said Baek.

The Thai-based Korean knows he has to tame the lighting- fast greens before harbouring any hopes of lifting his maiden Asian Tour title.

“In Japan, the greens are really fast and I find it difficult to read the greens. I’ll try to concentrate on my tee shots and improve on my putting over the weekend.

Although it is still not perfect, it’s getting better. My short game is also improving and that’s good,” said Baek.

Meanwhile Liang is also drawing upon the positives from last week’s tied-third finish in Sapporo to boost his hopes of lifting his first title in Japan this week.

“I’m feeling confident and last week’s result has also helped to boost it. I’m striking the ball well, which is important on this golf course.

I have not won in Japan before but I know that victory will eventually come if I continue to take it step-by-step and not put too much pressure on myself,” said Liang, a three-time Asian Tour winner.

Leading scores after round 2 of the Asia-Pacific Open Championship Diamond Cup 2014 being played at the par 71, 7117 Yards Ohtone cC course (a- denotes amateur):