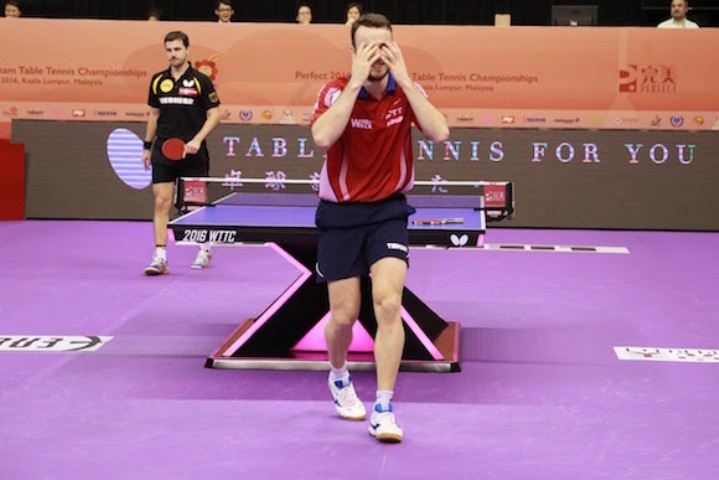 The second day of the Perfect 2016 World Team Table Tennis Championships, held in Kuala Lumpur, Malaysia from 28 February to 6 March 2016, saw top seeds in the Championships Division being pushed to their limits by teams lower in the ranking.

Without the presence of European Champion Dimitrij OVTCHAROV, who pulled out due to a back injuriy, the German men’s team became the biggest casualty of the day. The second seeds lost 1-3 to the French team in a marathon match that lasted close to 3 hours. Still affected by the aftermath of his knee surgery, world number nine Timo BOLL lost both his matches, 0-3 to Emmanuel LEBESSON, then 2-3 to Simon GAUZY.

Having contributed two match wins to the French team victory, Simon GAUZY shared after the 4-sets thriller against BOLL: “I feel so proud, I have so much respect for Timo. For everything that he brings to table tennis and for all he has achieved in Europe.”

“I have to say that I think that was the very best match of my career; I just beat a legend. Today, Timo was not in the best of shape, he lost to Emmanuel in the second match; he was below his best.”

The Japanese men’s team started the day with world no. 14 Koki NIWA suffering a surprise defeat to Singapore’s PANG Xue Jie, who is currently ranked at 334 in the world. His teammates Yuya OSHIMA and Maharu YOSHIMURA were also pushed to go the full distance by Singaporean duo YANG Zi and Clarence CHEW. NIWA eventually made up for his loss to beat YANG 3-2 to seal the overall victory for Japan.

Meanwhile, Korea DPR have continued to their dream run in Kuala Lumpur, after causing first round upsets yesterday against the Chinese Taipei Men’s team, who were the bronze medalists at the last edition of the team championships in Tokyo, Japan in 2014.

After losing their second round match 0-3 to the defending champions China, the 23rd seeds were able to seal the victory 3-0 against European Champions Austria, to keep their dream for the second stage of the world championships alive.

In the women’s event, though things went according to the seedings, it was no easy tasks for the world’s best teams here in Kuala Lumpur.

The German women’s team had a close encounter with the up-and-coming Brazilian team led by Latin American Champion GUI Lin. Despite being newly promoted to the Championships Division, the Brazilians proved they are a strong force in the international table tennis arena ahead of Rio 2016 Olympic Games. The 23rd seeds forced the seventh seeds to play five full sets, but the more experienced European Champions eventually prevailed for a narrow margined victory.

Like in case of the men’s team, Korea DPR put up a tough fight to secure their chances to top their group, however things didn’t go in their favor, and the North Koreans lost 0-3 to Japan’s strong trio of Kasumi ISHIKAWA, Ai FUKUHARA and Mima ITO.

China continued their charge to defending their titles, by winning both their women’s & men’s matches today.