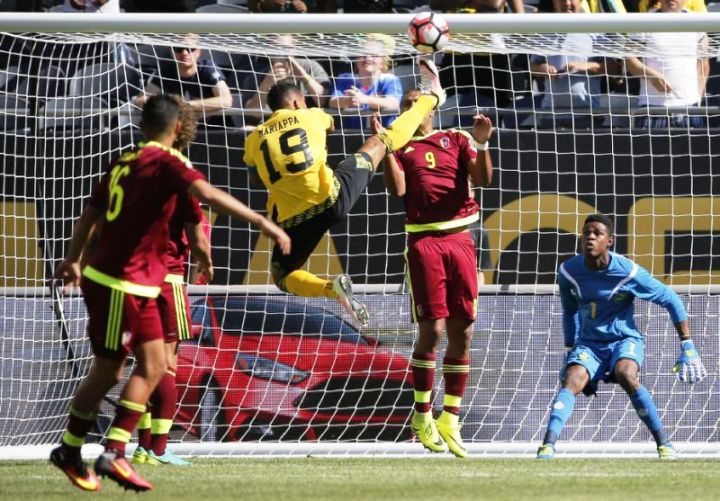 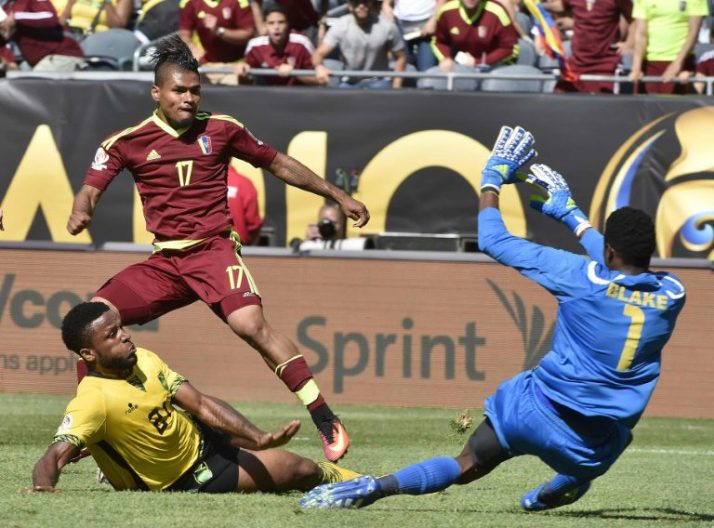 Venezuela defeated Jamaica 1-0 in a physical Copa America Centenario clash here Sunday that saw the Reggae Boyz reduced to 10 men while coach Winfried Schaefer was expelled from the dugout.

Jamaica, riding high after a shock friendly victory over Copa America champions Chile in a warm-up last week, were left ruing a string of missed chances against their South American Group C rivals.

“We had a couple of chances and didn’t take them, they got one chance and they took it, and that was the difference in the game today,” said Jamaica’s assistant coach Miguel Coley, appearing at the post-match press conference instead of the dismissed Schaefer.

In blazing hot sunshine at Chicago’s famous Soldier Field Stadium, Jamaica made life difficult for themselves with Rodolph Austin sent off midway through the first half for a rash challenge on Tomas Rincon.

By that stage Jamaica were already trailing 1-0 after a sloppy clearance from Michael Hector gifted possession to Venezuela around 30 yards from goal.

A swift series of one-touch passes culminated with Josef Martinez being played into space, and the Torino striker duly tucked away a low finish beneath the advancing Andre Blake to make it 1-0 after 16 minutes.

Jamaica had their chances to score, with JeVaughn Watson heading against the cross bar from Garath McLeary’s corner after only 11 minutes.

He was seen in a lengthy discussion with the match officials just before the start of the second half before being ordered to watch the remainder of the game from the stands.

Although down to 10 men, Jamaica continued to create chances, Michael Hector clipping the outside of the post on 49 minutes with a fine curling shot from distance.

Venezuela almost doubled their lead in the 70th minute only for Wilker Angel’s powerful diving header to be parried away by Blake.

Jamaica had started the game without Leicester City star Wes Morgan, with reports in Kingston quoting Schaefer as saying he was still tired from celebrating the Foxes’ fairytale Premier League triumph.

Morgan however appeared from the bench in the 40th minute, replacing the injured Kemar Lawrence.

“It’s always hard when you go a man down but I think it shows our team spirit that we didn’t concede another goal and we kept going and created chances,” Jamaica’s English-born forward Giles Barnes said.

“We gave blood sweat and tears but unfortunately we didn’t hit the back of the net.” – Agence France-Presse