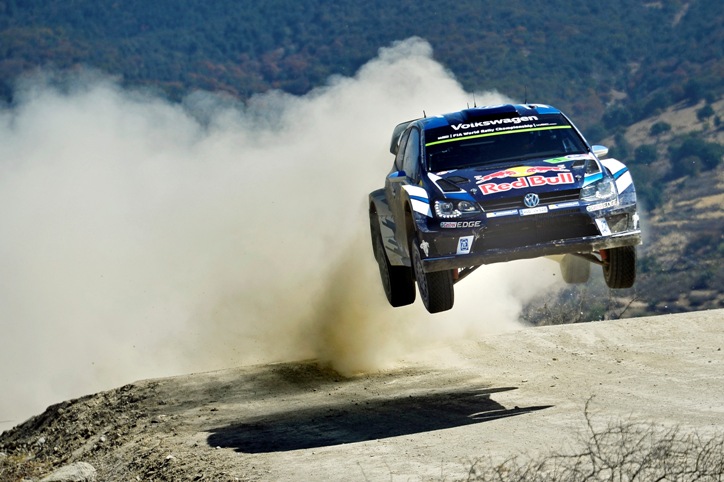 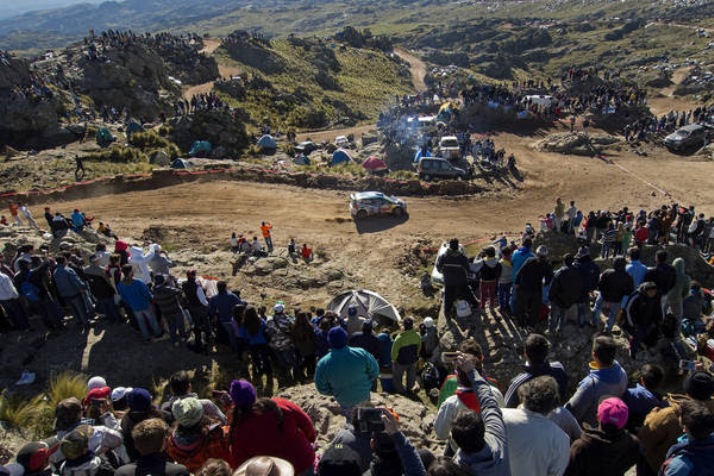 Unbeaten from Portugal 2015 to Mexico 2016, Argentina would make it a full house

Long break for the drivers: skiing, decorating, new additions to the family

From Portugal to Mexico, and now hopefully Argentina: Volkswagen goes into the fourth round of the FIA World Rally Championship (WRC) in a particularly determined frame of mind. The Rally Argentina sees the world championship-winning team return to the very last place, at which the Wolfsburg-based car maker did not stand on top of the podium with the winners’ champagne.

Between Argentina 2015 and Argentina 2016, Sébastien Ogier (F), Jari-Matti Latvala (FIN) and Andreas Mikkelsen (N) have put together a historic winning run of twelve successive victories. Together with co-drivers Julien Ingrassia (F), Miikka Anttila (FIN) and Anders Jæger (N), they now have their sights set on continuing this remarkable success story. Were they to do so, they would go an entire year and once round the world unbeaten.

However, the duos in the three Polo R WRC face a big challenge: the 18 special stages feature a total distance of 364.68 kilometres against the clock – and not a single stage remains unchanged from 2015.

“There is no question about it: when you have achieved a run like this and have the opportunity to put the icing on the cake, you are particularly motivated,” said Volkswagen Motorsport Director Jost Capito. “Once around the world without a single defeat – that is something that no manufacturer has ever achieved in the World Rally Championship.

However, we are going about this task in an extremely calm and meticulous manner – as we do at every round of the world championship. We know that the last time we were not successful was in Argentina, so we need to raise our game. However, I am 100 per cent certain that everyone in the team will do their very best.”

Twelve victories, three continents and almost once around the globe

Wins at the rallies in Portugal, Italy, Poland, Finland, Germany, Australia, France, Spain, Great Britain, Monte Carlo, Sweden and Mexico – Volkswagen has put together a historic winning run for the second time. The only other manufacturer ever to have achieved this feat was Volkswagen itself, when the Polo R WRC went undefeated for twelve rallies from Australia 2013 to the Rally Finland 2014.

An achievement, of which Volkswagen is particularly proud – the third-longest winning run belongs to Citroën with eight back-to-back victories. Volkswagen could put the icing on the cake in Argentina: one more triumph would see the Wolfsburg-based outfit become the first manufacturer ever to go undefeated around the world for twelve months. The Polo R WRC’s only previous victory in Argentina came back in 2014, when Jari-Matti Latvala was first and team-mate Sébastien Ogier finished second.

Blind spot: Sébastien Ogier and Julien Ingrassia have a score to settle

Sébastien Ogier and Julien Ingrassia have a score to settle with the Rally Argentina, which is the only rally on the WRC calendar that they are yet to win. They have won all of the remaining twelve rounds that they have lined up at in the past, from Monte Carlo to Australia (China makes its first appearance in the WRC since 1999 in September), at least once. The closest they have come recently to winning in South America was in 2013 and 2014: in 2013 they finished runner-up behind record world champions Sébastien Loeb/Daniel Elena (F/MC, Citroën), whilst Volkswagen team-mates Jari-Matti Latvala/Miikka Anttila (FIN/FIN) also pushed them into second place in 2014. 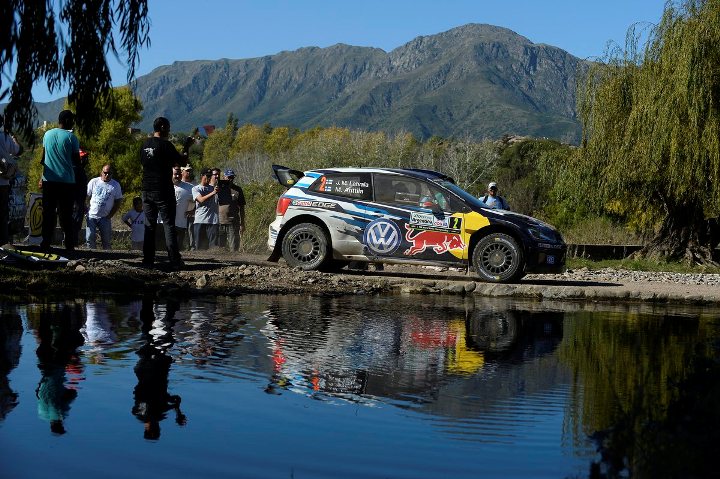 Not a single special stage remains unchanged from last year. 22.8 per cent of the total distance will be held on completely new sections of route. The drivers and co-drivers will have to be fully focussed on the Recce at the Rally Argentina. The duos must ensure that their pace notes are spot on, as over half of the stages that have featured on the rally since 2011 must be tackled in the opposite direction. These include the infamous “El Cóndor” Power Stage. Furthermore, the popular “Mina Clavero” stage, not far from “El Cóndor”, returns to the itinerary. In contrast, the drivers must tackle the “Los Gigantes” stage, of which only a short section featured on the 2012 route, for the first time.

On its journey to Argentina, the Volkswagen team must take the longest non-stop flight that airlines like Lufthansa offer. And this is just part of what is truly a logistics marathon. When the team arrives in Carlos Paz, the venue for the Rally Argentina, the equipment will already be there waiting. Eight overseas containers travelled by ship straight from the previous round in Mexico to Argentina. A further eight air freight containers were flown from Volkswagen’s motorsport headquarters in Hannover to Carlos Paz. The cargo included the three Polo R WRC and the most important spare parts. The Rally Argentina is followed by five European rallies in a row, before China represents the next overseas rally. As such, the sea freight will travel straight from Argentina to the Beijing region.

The spring break is over, and it is back to the rigours of the World Rally Championship. During the break in the racing, however, the Volkswagen drivers have recharged their batteries in a variety of ways. Sébastien Ogier used the time to go skiing in Kitzbühel and looked after the new addition to his family – mongrel Gypsy, who the world rally champion and his wife rescued from the Munich animal shelter.

Andreas Mikkelsen enjoyed a holiday in Thailand, went skiing in Meribel and decorated his apartment in Monaco. Jari-Matti Latvala was also a busy man: he went on long skidoo trips in Lapland – covering a total distance the equivalent of two WRC rallies – and a road trip across California. However, none of the three of the works drivers neglected their comprehensive fitness programmes. In summary: the drivers are ready and raring to go at the Rally Argentina.

Quotes ahead of the Rally Argentina

Sébastien Ogier, Volkswagen Polo R WRC #1
“The Rally Argentina is the only rally on the calendar that Julien and I have not yet won. This year will not be easy either, because we will once again be the first car onto the route. Whatever happens, I will do my best to improve my record here and to win the rally for the first time. Julien and I have had a great season so far. We have always achieved the best possible result. With this in mind, I am very optimistic about Argentina. However, the weather can be very tricky. Thick fog often restricts visibility, which is not very pleasant for a racing driver. As far as the surface is concerned, we must adapt from Mexico, as the gravel is much softer and the ground far sandier. That requires a different driving style.”

Jari-Matti Latvala, Volkswagen Polo R WRC #2
“After the victory in Mexico I had the feeling that we had finally arrived in the season. We must now carry this momentum on to Argentina, in order to ensure we continue to move in the right direction there. I will approach Argentina in exactly the same way as Mexico. Starting sixth generally gives you a little advantage – if the stages remain dry. There are more special stages this year than last year. But they are a bit shorter. I like this concept. I also like the mix of old and new stages. About a quarter of the route is completely new. We need new pace notes for this, but that goes for every team. I am most looking forward to the ‘Mina Clavero’ stage on Sunday, which was last part of the route in 2013.”

Andreas Mikkelsen, Volkswagen Polo R WRC #9
“Last year I was really unlucky in Argentina. First a puncture developed into a far larger problem and cost us a lot of time. Last but not least, we had to retire on the Power Stage following a collision with a rock. One thing is certain: I have set my sights on finishing on the podium here. However, that will not be easy, as the rally consists of a lot of new special stages. Unlike Mexico, the surface in Argentina is relatively soft and sandy. As such, deep ruts form quickly in the gravel. I really like the Rally Argentina, even though it is not easy. It is a nice place. I have always been quick there, but have never achieved a good result yet. That has to change this year.”

Number for the rally weekend in Argentina: 922.37

Probably the fastest globetrotter in the world: the Polo R WRC has so far covered enough distance at rally speed to travel around the world almost exactly once. Ahead of the fourth round of the WRC in Argentina, the Polo R WRC had completed exactly 39,063.05 kilometres of special stage since the start of the Rally Monte Carlo in 2013. For comparison: the equator is 39,985.42 kilometres long. As such, with Ogier, Latvala and Mikkelsen set to cover a combined distance of 922.37 kilometres in Argentina, Volkswagen could have completed enough kilometres to travel once around the world. After the spring break between overseas rallies in the World Rally Championship, the car from Wolfsburg can certainly claim to be a real globetrotter, with 43 rallies to its name. The 2016 World Rally Championship will take place in 15 countries on five continents.