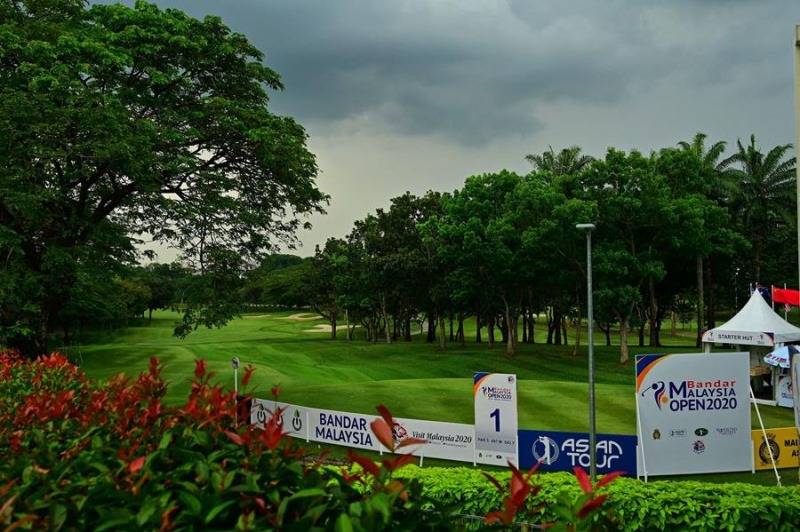 The prestigious Bandar Malaysia Open has been reduced to 54 holes following several weather delays which saw more than 10 hours of play lost throughout the week, officials said Saturday.

The third round of the US$1 million event, which got underway at 12.15pm local time, was suspended for the third time this week due to lightning threats at 2.05pm, just before overnight leader Andrew Dodt of Australia was due to tee off.

With inclement weather expected on Sunday, officials made the decision to shorten the tournament at 4.30pm on Saturday and abandoned play for the day at the same time due to continued lightning activity in the area.

All 74 players, who made the halfway cut set at one-under-par 143, will resume their third and final rounds at 8.30am on Sunday with the last two groups scheduled to tee off at 8.30am and 8.40am respectively.

“The tournament has been affected by several lengthy delays and suspensions due to inclement weather throughout the week,” said Fritz Katzengruber, Tournament Director, Asian Tour.

“As a result of the delays and the disruptions that we have suffered, we have taken the decision to reduce the tournament to 54 holes. The decision was made in the best interest of the tournament and our members,” Fritz added.

A total of 77 players had returned to the Kota Permai Golf & Country Club on Saturday morning to complete their second rounds, which resumed only at 8.15am local time due to a 35-minute weather delay.

At the age of 14 years and 308 days, Lo Tien Ming became the second youngest Malaysian after 2017 Order of Merit champion Gavin Green (14 years and 305 days, 2008 Johor Open) to make the halfway cut on the Asian Tour at the Bandar Malaysia Open.

Dodt, who opened his campaign with a stunning 63, continued his bogey-free run when he signed for a four-under-par 68 to stay atop the leaderboard after 36 holes at the weather-disrupted Bandar Malaysia Open.

With a two-day total of 13-under-par 131, Dodt holds a one-shot edge over China’s Liu Yanwei, who had earlier impressed with a second round 65. American duo Jarin Todd and Trevor Simsby shared third place on matching 133s.

Korea’s Charlie Wi, winner of the Malaysian Open in 2006, Japan’s Rikuya Hoshino and Asian Tour Order of Merit leader Wade Ormsby of Australia will all be within striking distance of the coveted title when play resumes on Sunday.

The highly acclaimed Bandar Malaysia Open, which boasts a new tagline ‘Pride, Passion, Prominence’, is the flagship event for the Malaysian Golf Association (MGA). It returns to the Asian Tour schedule this week after a four-year hiatus.