Home News Others Wilayah are champs, Perlis finish off with 11 golds 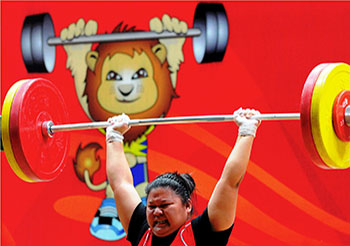 KANGAR – Wilayah Persekutuan were crowned the champions of Sukma Perlis XVII after edging out Terengganu in an intense battle that went down to the wire.

For Wilayah, the victory was sweet as they ended 28-years of waiting to be declared the overall winners again. Wilayah last won the overall title when they hosted the inaugural Sukma in 1986. Since then, the title has been won by three states Selangor, Sarawak and Terengganu.

Terengganu started the day trailing Wilayah by seven gold medals. Wilayah had 48 gold medals to Terengganu’s 41. But with over 50 medals on offer on the penultimate day, both states were scrambling to win as many medals as possible to outdo the other.

Wilayah started well and had two golds by 11am from wushu’s Loh Choon How (taijiquan) and badminton ace Zulfadli Zulkifli. They added seven more to top out at 55. Terengganu put up a brilliant fight and gave Wilayah a scare as they reeled in the medals. They eventually bagged 10 golds for a total of 51.
They won three in perahu layar and one each in berbasikal, menembak, golf, lawn bowls, tinju, memanah and taekwondo. Despite their best efforts though, Terengganu just could not win enough events to beat Wilayah.

At press time, only three more golds were not accounted for – two in bowling and the other from football which meant Wilayah had an unassailable lead. Sarawak, hosts for the 2016 Sukma, finished third with a haul of 46 golds with Selangor and Pahang next on the tally with 36 and 33 gold medals.
Hosts Perlis performed remarkably as they added three more gold medals today in lawn bowls (women’s pairs – Daeng Dessy Dhabita Dahasry and Syafiqa Haidar), tennis (women’s doubles – Yus Syazlin Nabila Yusri and Sharifah Syafeenaz Syed Azmir) and tinju (men’s 64kg – Mohamad Rahidi Mahmud).