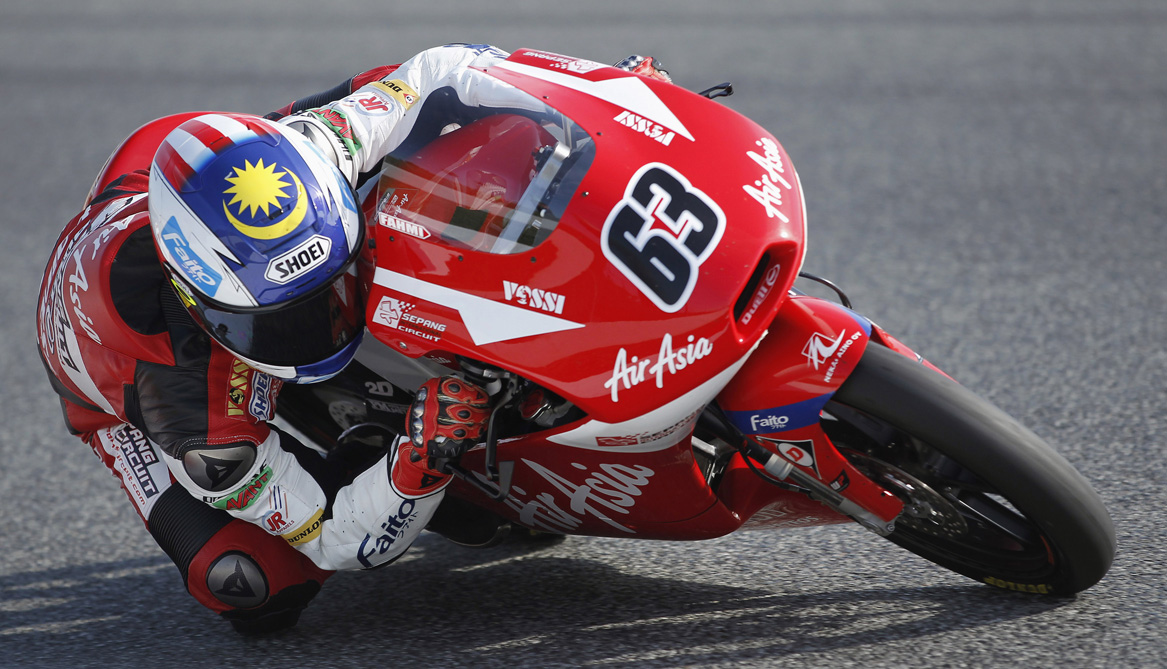 Malaysian Moto3 rider Muhammad Zulfahmi Khairuddin has put quickly aside his disappointment in Australia to focus on the impending Shell Advance Malaysian Motorcycle Grand Prix in Sepang this weekend.

“We need to forget about race and immediately focus on the race in Sepang,” commented Zulfahmi, who crashed out on the second of the 23-lap race which was held in chilly and windy conditions.

“On the second lap, the rider in front of me encountered mechanical problem and his bike began spitting out bits of oil. I suddenly lost my grip into the second corner and crashed. We must forget this race and concentrate on Sepang,” added the Ongetta AirAsia rider.

Another Malaysian, Amirul Hafiz Azmi, the Moto3 rookie competing for the first time in Phillip Island, fared better when he finished 18th in a grid of 32 riders. Starting from 22nd on the grid, Amirul said he had a good start but the race was tough and it was difficult to catch up with the leaders.”

“I had a close fight with (Luca) Grunwald and (Andrea) Migno in the early stages of the race. We managed to close the gap a little at the start but the front group pulled away,” added the SIC-AJO Team rider.

The Moto3 race was eventually won by Aussie ace Jack Miller who rode the race of his life to win at home and in the process edge out Alex Marquez and Alex Rins.

In Moto2, an ill Hafizh Syahrin Abdullah retired after Lap 10 after his fever worsened and he was unable to continue. Azlan Shah Kamaruzaman, who was also unwell throughout the weekend, did not start the race.

The Moto2 race was won by Spain’s Maverick Vinales.

Meanwhile, fans are reminded to purchase their tickets for the Shell Advance Malaysian Motorcycle Grand Prix early. Tickets for the Main Grandstand North and Grandstand F tickets are already sold-out.

“If you’re a motorcycle racing fan, I would advise you to secure your tickets as soon as possible to avoid disappointment,” said Sepang International Circuit CEO, Datuk Razlan Razali.

Fans still have several other Grandstand ticket options to consider and this includes the Main Grandstand South and the Grandstand K1. Tickets for Hillstand C are also still available, starting from only RM40.