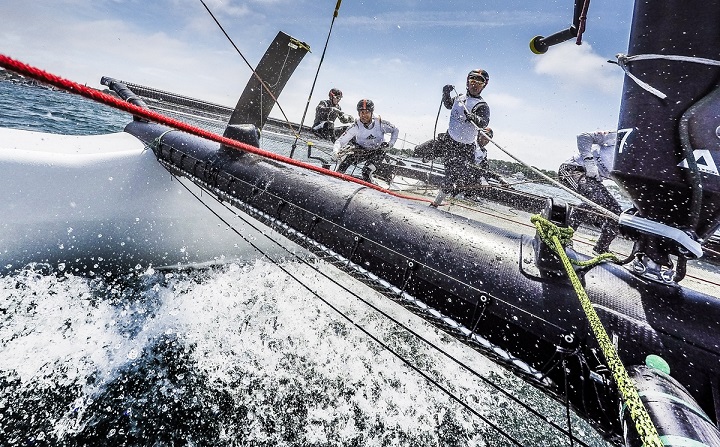 Here the sailing-mad locals get to cheer on their sailing stars such as three-time winner Björn Hansen and the local FLUX Team of Johnie Berntsson. However, this year it is sure to be the biggest and most competitive event yet in Marstrand, as 20 teams fight it out for the ‘winner-takes-all’ Tour bonus of a cool US$ 1 million.

US$ 1 million, is roughly Euro 885,000, AUS$ 1.35m or NZL$ 1.4m – more than enough to buy more than three of the high performance M32 catamarans that will contest the World Match Racing Tour Marstrand for the first time, taking over from the perennial D37 monohulls used at the event for the last 20 years.

Once upon a time when the World Match Racing Tour was backed by title sponsor Swedish Match, the Marstrand event was the stand-out event, the grand finale of the season. Now that the World Match Racing Tour is under Swedish ownership, the Marstrand event is set to return to its former glory. Never has the World Tour seen such a significant amount for one event and nor has the Tour bonus ever been awarded exclusively to the winner.

The big question is how will such a significant fiscal incentive affect the racing, that already in the season’s penultimate event in Newport, Rhode Island was getting aggressive. A giant winner-takes-all bonus is certain to increase this.

As World Match Racing Tour owner, Håkan Svensson, observed in Newport: “You can see there are a lot nerves already and Marstrand is going to increase that pressure a lot on the teams. So the team that holds up best to that pressure will win. There are a lot of teams that are practicing every day to get better when it comes to the sailing. Taylor [Canfield] is in a good spot but he needs to keep his nerve.”

Canfield and his US One team go into the World final as stand-out favourite. The US Virgin Islands skipper has won the last three World Match Racing Tour events, the last two in Copenhagen and Newport sailed aboard the high performance M32 catamarans.

While it is not relevant to who will claim the big prize, Canfield’s position in the overall World Tour rankings give a good indication of the form going into marstrand: On 122 points, he’s proved his dominance this year, leading second placed Ian Williams and his GAC Pindar team on 89 points, and Dane Nicolai Sehested’s TREFOR Match Racing Team heading up the Scandinavian skippers with 85 points.

“It is a big prize purse and a big bonus – it’ll be an awesome event, it is a great venue and there is big money up for grabs, big stakes,” says Canfield. “It is going to take some luck in that venue, especially if we get some changeable direction off the shoreline. There’s sometimes nothing you can do in the catamarans to get yourself back in the race. It is a combination of skill and luck and if we prepare as best we can, I think we have a good chance.”

As to how large the butterflies will be if he ends up in the final and its goes to match point. “It will be all on, teams will be pushing really hard. There’s a lot on the line and I don’t think anyone is going to give it up easily.”

The WMRT Finals in Marstrand run from 4-9 July, starting with two days of Fleet Race Qualifying. The event will be streamed lived on the internet on all days with a live broadcast to international networks on the final day. For more info please visit: wmrt.comor matchcupsweden.com