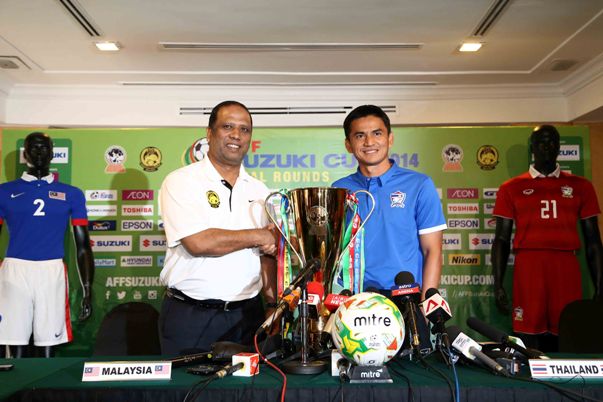 Harking back to their over the moon performance in Hanoi, Malaysian coach Dollah Salleh admitted that they will need to come up with something special when they take on Thailand in the second-leg, finals of the AFF Suzuki Cup tonight.

The Malaysians made the finals of the championship this year after beating Vietnam 5-4 on aggregate over the two-legged semi-finals that was played in Kuala Lumpur and also Hanoi.

They conceded a 2-1 loss in Shah Alam but managed to score and emphatic 4-2 victory in Hanoi to book their place for the title decider.

“First and foremost, I have to congratulate Zico for coming to his first pre match press conference,” said Dollah.  “It will not be easy against the Thais but of course, we need to come up with something special.

“We need to do what we did in Hanoi. That was the best game we had so far. And we need to produce that sort of performance against the Thais.

“The Thais as they are fast and they have some good technical players. But we are playing at home and we should put in 200% effort in front of our own fans.

“We made some mistakes in the first leg and that penalty spoiled everything. I don’t blame the players though.”

But while no one will serve suspension in the Malaysian camp, there is however a big question mark on Indra Putra Mahayuddin’s availability following the latter’s injury to his left toe.

“I’m not sure whether he can play, so there will be some tactical changes,” added Dollah. “We lost to Thailand twice already, so we have to come up with the right gameplan.

“We are two goals down at the moment but there’s every chance of a surprise.”