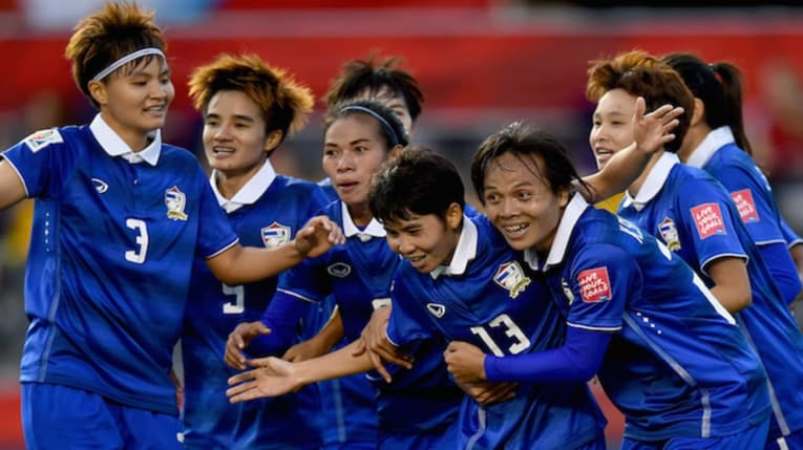 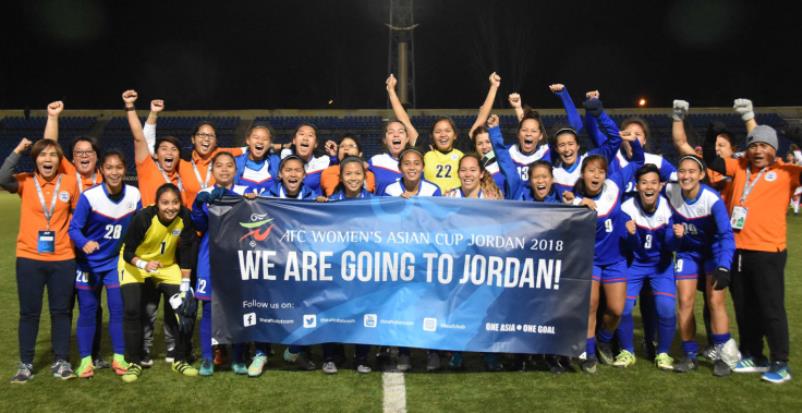 After Thailand’s breakthrough qualification for the FIFA Women’s World Cup 2015, a new cast of Southeast Asian stars will carry with them the hopes of the region at Jordan 2018.

Philippines back on the big stage

A freezing pitch in Dushanbe, Tajikistan was an unlikely setting for a milestone moment in Filipino football, but it was there that the Malditas, the women’s national team, ended a 15-year drought to qualify for the AFC Women’s Asian Cup 2018 with a 1-1 draw against Bahrain.

The Philippines have appeared in the continental championship on eight previous occasions, but those outings all came in an era where there was no qualification tournament.

Successfully qualifying for Jordan 2018 has the potential to usher in a new era for the women’s game in the country, according to Philippine Football Federation President, AFC Executive Committee Member and FIFA Council Member, Mariano V. Araneta Jr.

“It has been a long wait, but finally the Philippine Women’s National Team have this chance once again to play in the AFC Women’s Asian Cup along with the best teams in the continent,” said Araneta.

“The tournament presents a huge opportunity for our women’s team to make history and inspire more girls to play football in the country.

“Positive results in the Women’s Asian Cup will surely encourage and motivate the next crop of women’s footballers.”

The Philippines were drawn alongside China PR, Thailand and hosts Jordan at the official ceremony on the shores of the Dead Sea earlier this month, and – having avoided heavyweights Australia and Japan – they sense an opportunity.

“The draw results look fair for our chances to qualify for the next round. Any group will always be a challenging group for the Philippines women’s team,” Araneta said.

“The team should see the group draw as an opportunity to represent the Philippines at the highest level and to make it a memorable tournament.

“Everyone in the team is motivated since the tournament also serves as the qualifiers for the 2019 FIFA Women’s World Cup, which is the main target of the team,” he concluded.

One team who know what it takes to reach the Women’s World Cup are Thailand, who defied history to not only qualify, but claim a historic first ever win at Canada 2015.

Nuengrutai Srathongvian was the head coach for those achievements, and – after over a year away from the top job – she is back at the helm, having replaced former Manchester City and Leicester defender Spencer Prior in September.

Drawn to meet Jordan, China PR and the Philippines in Group A, a return to the world stage is Nuengrutai’s clear objective ahead of Jordan 2018.

“The group is less tough than last time since most of the teams have similar capabilities especially Jordan and Philippines,” said the experienced head coach.

“In fact, only China have a higher ranking than us. There’s a really good chance of us going to World Cup once again.”

Thailand had a mixed 2017. They won seven matches in a row between January and August, and only missed out on SEA Games gold medal on goal difference, but suffered home defeats to New Zealand and Jordan to close out the year.

Despite their patchy form, Nuengrutai believes the Thais are capable of reaching the semi-finals for the first time in more than 30 years.

“Our ultimate goal is definitely being the second of the group,” she said.

“If we want to go to the World Cup, it is essential for us to get at least second place in the group stage, meaning that we must defeat both Jordan and Philippines, and we know that both teams have been preparing for the tournament really well.

“Getting to the semi-finals would be considered as a great achievement for the team, since this result would mean that our team will be guaranteed of a place in the World Cup.”

Thailand beat the Philippines 3-1 at the SEA Games in Kuala Lumpur in August, but Nuengrutai is under no illusions as to the potential difficulty of the all-ASEAN clash on April 12.

“We cannot overlook the Philippines. They’ve played against us so many times, meaning that they will be familiar with our game play,” she said.

“A good preparation based on our past matches could make the game difficult for us; therefore, we also have to improve much in order to reach our goal in this tournament.”

While Thailand remain the highest-ranked team in ASEAN, Vietnam are the only Jordan 2018 qualifiers to have traversed 2017 without losing a single match.

They went within 90 minutes of a first ever Women’s World Cup appearance when they hosted the Women’s Asian Cup four years ago, but Vietnamese hopes of going one better in Jordan were dealt a blow at the official draw earlier this month.

Mai Duc Chung’s side will meet reigning champions Japan, World Number 4 Australia and a much-improved Korea Republic in what has been dubbed the ‘group of death’, but the highly-respected boss is excited by the challenge.

“We have to accept the result. It’s a challenge that we’re there with strong opponents such as Australia, Japan and Korea, but we will try our best in this challenge,” he said.

“With this draw result, many people may think that Vietnam will not have chance to go further, but for me, this is a really good chance for us to play with strong teams in Asia and the World.”

Vietnam produced an electric brand of football in the AFC Women’s Asian Cup qualifying tournament in Hanoi in April, with Hunyh Nhu and Nguyen Thi Tuyet Dung just two of the star performers in Chung’s highly-organised side.

The SEA Games-winning head coach, who recently served as caretaker for the Vietnamese men’s national team, disclosed that his team will prepare for the tournament with a clash against one of the world’s most famous clubs.

“We are planning a training camp in Germany and will play a friendly match against Bayern Munich women’s team,” he revealed.

“As we will play against strong opponents, the players’ fitness and competition spirit will be prepared very well.”

The AFC Women’s Asian Cup begins with Thailand meeting host nation Jordan on April 6, while the Philippines will face China PR on the same day. – www.the-afc.com