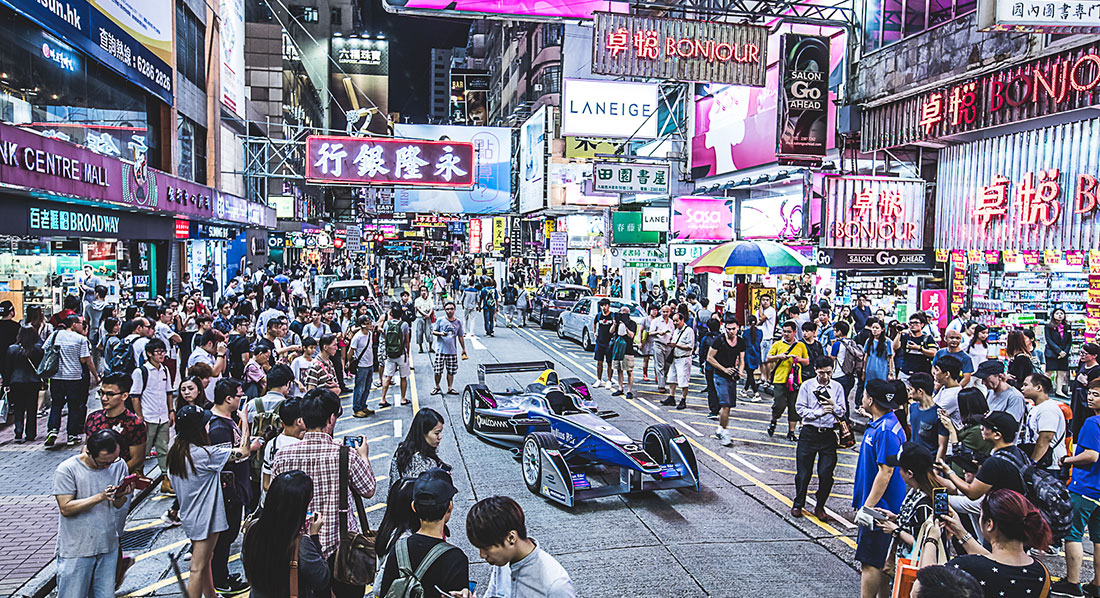 The inaugural Hong Kong ePrix will be part of the third season of the FIA Formula E Championship, the world’s first fully-electric racing series and ground-breaking innovation in sport and entertainment. As the first-ever international auto racing tournament in Hong Kong, the Hong Kong ePrix is set against the iconic skyline of the Central Harbourfront.

Apart from the LED walls and trackside banners at the racing venue, the key locations where media from around the world will be capturing images, Asiaray will also be managing the advertising spaces of the public areas including the spectator fences, the Man Yiu Street footbridge connecting Central Ferry Pier and International Finance Center, and Central Terminal Building (Pier 7 & 8). Corporate packages of Emotion Club and Grandstand as well as e-Village Activation Area will also be offered via Asiaray to help advertisers in brand building and customer engagement with their VIPs and upscale clients. The debut of the Formula E event in Hong Kong is expected to not only attract the local fans and tourists, but also widespread media attention.

Mr. Vincent Lam, Founder, Chairman and Chief Executive Officer of Asiaray, said, “We are honored to be appointed as the exclusive advertising agency of this all-electric racing championship. The winning of the Hong Kong ePrix tender acknowledges our outdoor advertising capability which is matched with international standards. We look forward to partnering with the organizer in delivering advertising solutions which attract visitors from all over the world to this ground-breaking motorsports event, enabling our advertisers to build their brand and engage with their customers in such an exciting environment. Leveraging our proven track record in the outdoor advertising industry, we believe that our business is able to transcend specific media resources; extending to many platforms beyond traditional venues, and thereby presenting promising growth opportunities in the future.”

About Asiaray Media Group Limited (HKSE: 1993)
Established in 1993 and listed on the Main Board of The Hong Kong Stock Exchange in 2015, Asiaray is a leading out-of-home media company in Greater China with a strategic focus on airport and metro line advertising. It is currently ranked first among privately-owned media companies in terms of number of airports and second in terms of number of metro lines with exclusive concession rights to mainstream media resources and revenue in Greater China. Through its constant efforts in expanding media resources with strategic value, the Group has secured exclusive concession rights to mainstream media resources at 27 airports and 12 metro lines as at 17 August 2016. In August 2016, Asiaray is also appointed as the exclusive advertising agency of FIA Formula E in Central Harbourfront, Hong Kong. With an extensive nationwide network of media resources covering 36 cities in Greater China, the Group leverages its well-developed space management approach to deliver integrated, creative out-of-home media solutions to renowned and diverse advertising customers. For more details about Asiaray, please visit its official website: www.asiaray.com.

About Hong Kong ePrix
The FIA Formula E Championship, the world’s first fully electric racing series, blasted off the grid in 2014 and is driving the future with its fusion of motorsport and entertainment. It has attracted vast global attention since its launch last year, with global TV audience of more than 190 million during first season. The championship is centered on the three core values of energy, the environment and entertainment. The first FIA Formula E season included races on the streets of 10 cities, from China to North America and Europe. For more details about Hong Kong ePrix, please visit its official website: www.hkformulae.com.