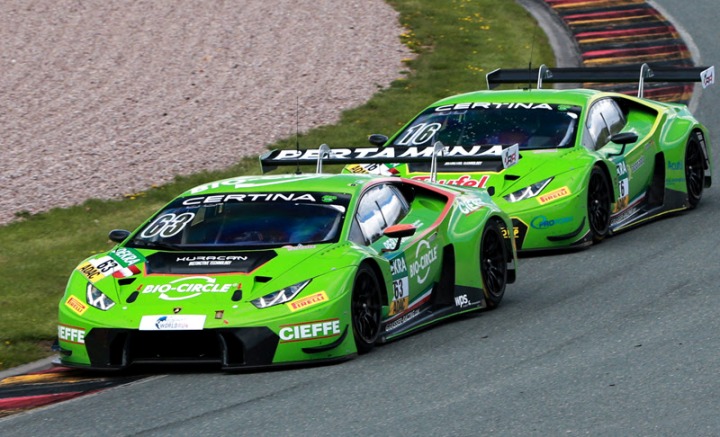 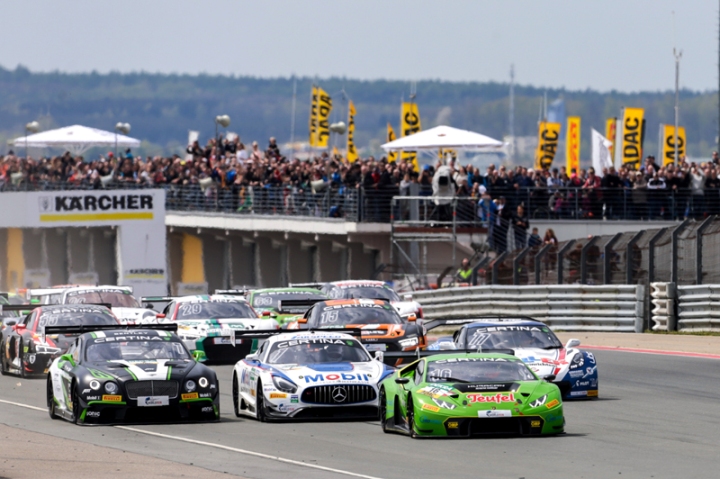 A fast car, strong fights but also a fair amount of bad luck marked the second weekend of the ADAC-GT-Masters for Grasser Racing Team. Already in qualifying for race number one on Saturday proof about the competitiveness of the Lamborghini Huracán was given when Luca Stolz put the car in pole position – a highlight of the weekend. “So we really could hope for another victory after Oschersleben”, team principal Gottfried Grasser was adamant.

Stolz then managed to keep the lead from the beginning, even extending it again and again after the first few safety-car-periods. So victory seemed to be close, until at around half distance another safety car due to a slight off of Robert Renauer during the mandatory pit stop window caused havocs for the GRT Lamborghini juniors, as a few unlucky circumstances came together.

Luca Stolz was a bit unsure about the situation in first place, “as during the drivers briefing we were told there would be no safety car in such circumstances, but only double waved yellow…” So he tried to get in contact with his race engineer, “but it just happened that we both pressed the “talk” button on the radio exactly at the same moment, so there was no contact possible. And in the whole mess I missed the pit lane entrance” – with fatal consequences. One lap later the safety car already come back in again, so that the necessary pitstop now cost a lot more time in comparison to the competitors, which led to Tweraser only returning to the track in tenth position.

“I could improve to seventh in the end, but of course it is a bit disappointing knowing that so much more was possible”, the Austrian said.

For the second race qualifying had not gone so well with P13 and then Tweraser lost a few more positions at the start when being hit by a Porsche from behind. But then the bit catch-up began, which ended in fifth place in total and second in the junior class. “We really put the pedal to the metal from the beginning.

Luca also did a great job again and the car was running very well the whole weekend which is very promising”, Tweraser is already looking into the future. “What is really impressive about GRT is the very special relationship and cooperation of all the team members. We specially have to thank Gottfried Grasser, who knows the Lamborghini inside out and together with us drivers worked out a perfect set up.”

Luca Stolz in the end was “really content with P5, considering from where we came from. When ‘I was in the car, I had a lot of fights to go through. The last two laps were really intense, but even under high pressure I did not do any mistakes.”

Things also did not really go to plan for Rolf Ineichen and Christian Engelhart, who at the start of the season in Oschersleben had climbed the highest step of the podium. “We were just unlucky all the weekend, even as the GRT team hat put up a great car for us”, Swiss driver Ineichen stated. “

In the first race it was a safety car at the wrong time for us which dropped us back and stopped our rise through the field towards the podium” – which under normal circumstances still would have been possible from P10 on the grid.  So they had to settle in 12th – and things should take a turn to the worse in race two.

Coming from 4th on the grid this time, they were in a much better position to go for the podium this time, but then bad luck come their way again: “We were fifth  when we got hit from the back by the Abt Bentley. We suffered a puncture and managed to limp back to the pits”, Ineichen reported slightly angry about the at least doubtful action of his opponent.

During the course of the race they managed to climb up through the field again and after taking over from Ineichen, team mate Christian Engelhart further managed to improve their position, leaving some other cars behind. But he also could not enjoy his great drive for too long.

Another puncture, probably caused by some carbon debris on track slicing the side of the tyre, “made it impossible for us to fight for a decent position any more and so we retired the car with only a few more laps left to go.” Engelhart was adamant, “that we really seemed to be on our way to the podium again in the beginning, we were by far the fastest Lamborghini and the whole GRT Grasser Team did a great job as usual. It was just not our race.”

Team principal Gottfried Grasser tried to take as many positives as possible out of the weekend: “Once again we were able to prove how competitive the Huracan GT3 is. Pole position, fastest lap of the race – that says it all. But we simply had a lot of bad luck this time. Safety cars at the wrong time for us, the communication problem, the Bentley hitting us – a lot of things coming together. In race two, Rolf and Christian really did a great show.

Normally a top three finish for sure would have been the reward.  But as a whole it was still a positive weekend where luck just was not on our side. But that´s racing – these things happen…”

There won´t be any real brake for the Grasser squad now. Already on Sunday night the cars had to be rebuilt at Sachsenring for a test day for Ineichen and Engelhart on Monday at Lausitzring.  Then the second round of the Blancpain GT Sprint series next weekend is already waiting at Brands Hatch. “I am really looking forward to that”, says Grasser. “Sachsenring and Brands Hatch are quite similar in their characteristics, so for the moment I am not really worrying about performance…”